North Dakota’s unexpected oil boom has triggered a surprising development that people outside the industry have yet to grasp: U.S. domestic crude oil must now compete with Canadian imports for space on the nation’s pipeline system.

That new reality is at the core of an escalating battle between Canadian pipeline giant Enbridge Inc. and a tiny U.S. pipeline operator that’s trying to get North Dakota’s newfound oil riches to more U.S. refiners.

High Prairie Pipeline LLC wants to build a pipeline to carry oil east out of North Dakota’s prolific Bakken oil formation. Oil producers there outgrew North Dakota’s few pipelines long ago, and the bottleneck is forcing them to use pricier rail cars and truck fleets to deliver their crude. That limits their potential customers and cuts into profits.

For High Prairie’s $650 million project to succeed, it must connect with Enbridge’s 1,900-mile Lakehead system, which carries oil to refineries in the Midwest and to pipelines headed farther south. According to complaints High Prairie has filed with the Federal Energy Regulatory Commission and two other federal agencies, Enbridge initially said it had enough capacity to accommodate High Prairie oil at its hub in Clearbrook, Minn. But later Enbridge said it didn’t have room for the oil and would allow the Clearbrook connection only if, among other things, High Prairie assumed the financial risk of a $1 billion expansion on a section of the pipeline system, according to the FERC complaint.

“Everyone’s competing for space as far as shippers go, and that’s going to continue, just given the huge increases we’re seeing in Bakken crude oil production,” he said. “The High Prairie pipeline would consume capacity [on Enbridge’s Lakehead system], which would prevent some Canadian oil from making its way downstream of Clearbrook, unless Enbridge did another expansion.”

High Prairie has accused Enbridge of illegally reserving capacity for Enbridge-affiliated pipelines and for the surge in Canadian crude oil shipments that’s expected in a few years. Enbridge, which is already dealing with negative publicity from two large spills on the Lakehead system, denies the claims.

“In this case, it is High Prairie which is attempting to have the playing field changed in their favor simply because they chose to reject several reasonable alternatives presented by Enbridge which would have allowed High Prairie to connect to the Lakehead System,” Enbridge spokeswoman Terri Larson said in an emailed statement.

Opponents of oil sands imports—and the pipelines that carry them—see the High Prairie case as an important reminder that major pipeline projects are undertaken solely for the benefit of their owners, and that those interests may not be in sync with those of domestic oil producers, U.S. consumers or anyone else.

“The Enbridge situation shows the danger of relying on these Canadian tar sands crude oil pipelines to move domestic crude to market,” said Anthony Swift, an attorney with the Natural Resources Defense Council, which opposes the importation of Canada’s heaviest crude oil. “The overall layout of the [pipeline] system is now oriented to moving tar sands and heavy Canadian crude produced in Alberta to refiners in the U.S. Midwest and Gulf Coast. That is what’s most profitable for companies like TransCanada and Enbridge to move, and that’s what their businesses are focused on.”

On July 31, High Prairie asked the U.S. State Department to intervene, arguing that it is in the country’s national interest to ensure that pipelines in the United States “do not unduly discriminate against U.S. production or in favor of Canadian production.”

From 1991 to 2009, the State Department issued a series of cross-border permits to Enbridge with the understanding that the company would operate its U.S. pipeline system as a “common carrier.” Federal regulations grant common carrier pipelines sweeping powers in securing land rights-of-way for construction. In return, common carriers must operate as a kind of public pipeline utility, providing all customers with equal access to their facilities.

Enbridge rejects the notion that it prefers carrying Canadian crude over the U.S. domestic variety. The company operates the only existing pipeline that carries the Bakken oil to the company’s Lakehead system, and in its statement to InsideClimate News said it has invested $1 billion in Bakken-related infrastructure over the last seven years, “which is contrary to the unfounded allegations that we favor one product type over another.”

Enbridge also has two pipeline projects in development that would carry more Bakken oil to the Lakehead system. High Prairie claims those Enbridge-owned projects don’t have to meet the conditions Enbridge is trying to impose on High Prairie.

High Prairie’s 450-mile pipeline would carry up to 150,000 barrels per day of Bakken light crude oil to Clearbrook. Once there, the Lakehead system pipelines would take it to U.S. markets that are currently dominated by heavy crude from Canada’s oil sands.

Since negotiations for an interconnection deal fell apart, Enbridge and High Prairie have have issued dueling statements about the causes of the impasse. In addition to its petition to the State Department and its complaint before federal energy regulators, High Prairie has a complaint pending before the U.S. Forest Service. FERC declined to comment on the case; the State Department and Forest Service did not respond to requests for comment.

In its FERC complaint, filed in May, High Prairie alleges that Enbridge’s behavior violates its common carrier status because it has provided or intends to provide its own affiliates with additional capacity on the disputed pipeline.

“Enbridge clearly has no problems with accepting increased barrels of crude oil at Clearbrook, provided that those barrels come in from Enbridge-owned pipeline facilities,” Ward said.

Evidence in the FERC case includes a voicemail message that Steve Cabana, an Enbridge business development executive, left for High Prairie in April. In it, Cabana explains that “…at this point, it doesn’t look feasible” for High Prairie to connect in Clearbrook. He says the desired hub could probably handle High Prairie’s oil when it begins to flow in late 2013, but that “there will be no capacity to sustain those type of volumes beyond – call it 2016.” That’s when some analysts expect the growing wave of Canadian oil to overwhelm existing U.S. pipeline capacity.

Cabana said he would work on a possible connection for High Prairie at Enbridge’s Superior, Wis. hub, which is more than 200 miles southeast of Clearbrook. High Prairie contends that would force it to lengthen and re-route its pipeline, delaying the project and boosting its cost.

Larson, the Enbridge spokeswoman, didn’t answer questions about the Superior alternative or the voicemail. But in its formal response at FERC, Enbridge denied the discrimination and other claims, and characterized High Prairie’s allegations as “unfounded.” In the filing, the company also argued that common carrier non-discrimination rules apply only to shippers and not to the pipelines that carry their products—an argument that, if successful, could give pause to investors in pipeline projects that will require connections to the nation’s existing pipeline network.

A U.S. Congressman and a handful of refiners and oil producers have urged FERC to make sure Enbridge provides equal access to its common carrier pipeline.

In a July letter to FERC, Rep. Collin Peterson, D-Minn., noted the critical need for additional pipelines in the region. With common carrier pipelines, “all market participants should have confidence that they are operating on a level playing field,” Peterson said.

North Dakota’s Mandan, Hidatsa & Arikara Nation, which hopes to send its oil through the High Prairie line, urged FERC and the U.S. Forest Service to ensure that the MHA Nation’s oil “is not stranded as a result of a common carrier granting undue preference to affiliated entities transporting foreign tar sands oil.”

Another Company Complains to FERC about Enbridge

Enbridge is fighting similar discrimination claims involving another segment of its Lakehead pipeline system. In that complaint, also filed with FERC in May, PBF Holding Co. accused Enbridge of favoring Canadian crude oil shipments over the light sweet crude the company needs for its Toledo refinery.

PBF declined to elaborate on its case with FERC. According to the complaint, PBF said that after Enbridge limited volume on a light crude-only line that had reached capacity, PBF tried to secure space on another Enbridge pipeline that can carry various types of oil but typically carries Canadian heavy crude.

Enbridge denied PBF’s request, arguing that the line is dedicated to heavy crude and it would be unfair to accommodate PBF at the expense of existing shippers who have no alternate route. In this case, Enbridge has the backing of a host of refiners that get oil from both lines, but are pocketing big profits these days by using the much cheaper heavy crude imported from Canada.

“The massive growth of North American tight oil, particularly North Dakota’s Bakken play, is placing pressure, and competing directly with, Canadian barrels moving south,” the report said. “This problem will only get worse.” 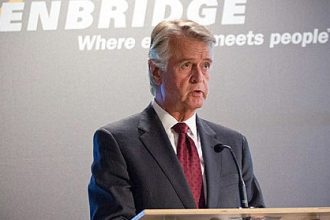