NEW YORK — When Rae Arora’s property company began building a block of 115 flats in Brooklyn, the blueprint called for the blue flames of natural gas for heat, hot water and the burners in kitchen stoves.

Plans have changed since then because of a tussle between National Grid, the UK-based energy utility, and Andrew Cuomo, the governor of New York. Instead of gas, electricity will be now used for heating in the building, backstopped by a diesel generator, Arora said.

National Grid owns a utility that distributes gas to parts of New York City and neighbouring Long Island. In May, the utility refused all new gas service after the Cuomo administration turned down a permit for an additional supply pipeline.

The drama intensified last month when Cuomo said his administration had received reports that National Grid was improperly denying service, including to existing customers who temporarily needed to turn off their connections. The governor suggested National Grid could lose its right to operate in the state.

National Grid, which is under intense scrutiny in its home market after a major blackout last month, contends it needs the pipeline to meet a 10 percent increase in gas demand over the next decade as New York’s economy grows and building owners abandon oil as a source of heat. A coalition of environmental groups have pressured Cuomo to block it.

The dispute encapsulates thorny questions policymakers face as shale drilling unleashes U.S. gas output while climate scientists urge a sharp reduction in fossil fuel use. Natural gas produces less carbon dioxide than oil or coal when it is burned, but it still accounts for 43 percent of New York state’s emissions from combustion, according to a government report.

U.S. gas production has risen 60 percent in the past decade to an estimated 91 billion cubic feet per day. The most prolific gasfield lies a few hundred miles west of New York City in the Marcellus Shale of Pennsylvania, offering a convenient source of energy.

But increasingly dire warnings about the climate have amplified calls for a halt to new pipelines. The Cuomo administration earlier this decade rejected the Constitution gas pipeline proposed to run through upstate New York. Federal regulators initially agreed that the state was in its right to reject the permit, but they reversed that decision last month.

Cuomo’s department of public service said it is investigating both Con Edison and National Grid “to determine whether they took appropriate actions to balance the need for reliability with customer impacts in declaring a moratorium on new natural gas hookups.” In August it expanded the investigation into National Grid after businesses complained of improper refusals.

The pipeline company Williams would build the $926.5 million pipeline more than 20 miles under water from a hub in New Jersey to a link off the coast of Queens.

A study commissioned by National Grid found that using NESE would reduce net greenhouse gas emissions between 2020 and 2030. The Environmental Defense Fund, a non-governmental group, said the study was the first of its kind for a U.S. pipeline project, though it added a more complete assessment would have looked beyond 10 years.

NESE has received approval from the Federal Energy Regulatory Commission. But New York and New Jersey have both rejected crucial water quality permits for the project. Williams has since submitted amended applications to the states, but an answer may not come until mid-2020.

Trouble at Home in the UK

The conflict in New York comes as National Grid faces two inquiries, one by the UK government and the second by Britain’s energy market regulator, into its management of Britain’s electricity system, following a blackout that affected more than 1 million homes and businesses, as well as rail travel, particularly in London and southeast England.

The regulator has warned National Grid of fines if it was found to have breached its licence conditions.

In the U.S., regulated businesses such as gas utilities earned half of National Grid’s 3.4 billion pounds in adjusted operating profit in fiscal 2019.

Bruckner said of Cuomo’s criticism, “The governor is certainly looking out for his constituents in New York, as he should.” But he disputed the claim that National Grid was unfairly reneging on service commitments.

For Arora, the stand-off has altered plans for five properties under development. He said his company has re-engineered them to provide electric heat now and gas if it becomes available in future. The cost of the necessary equipment has increased by 30 percent 40 percent, he said.

“Most people who are sane agree we want to move the state towards green energy. Most people agree on that,” he said. “But how we do it, and who we punish along the way, I think is going to determine whether we get there sooner rather than later. And this is the wrong way to do it.” 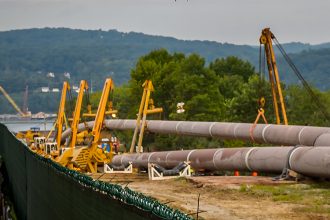 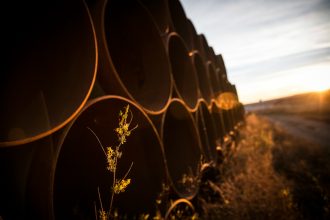