This excerpt is from Jason Mark’s new book, “Satellites in the High Country: Searching for the Wild in the Age of Man.” (Island Press, 2015). Read also ICN’s Q&A with the author.

The day after the grizzly bear encounter was our first on the river, and it took us a good couple of hours to break camp and learn how to load the two rubber rafts. By the time we were ready to go, our watches said it was well past noon. The late start was also due to the fact that a few of us had already taken on the sleep schedule of Berlin ravers. We’d stay up well past midnight, to when the light was dreamiest, then sleep until late morning. Not that we were worried about time. The sun hadn’t set at all the “night” before, and it wasn’t as if we were going to run out of daylight. Still, due to the unplanned layover in Arctic Village we were a day behind schedule and needed to make up some river miles. It felt good to shove off into the chocolate-milk-colored waters of the Aichilik and point the rafts northward.

Much of the time we were able to just go with the flow. Now and then Ritzman and Peter, the boat captains, would call out a command, and we’d strike our paddles into the water to keep our distance from the sand shoals and gravel bars, or to maneuver through the quick waters at the cutbanks. Our trip had been timed to hit the tundra’s two-week-long spring, the narrow window between ice-melt and the explosion of voracious mosquitos and black flies. But even in the week of the summer solstice, ice clung to the riverbank in many spots. Huge blocks of ice were stacked along the shore, slabs of pure white and digital blue that made me think of a deep-freeze layer cake. The day was warm—probably in the low seventies—and the ice was melting fast. As we paddled downstream the rafts zipped between colonnades of waterfalls, the meltwater torrents splashing around us.

Other than the river murmur, the scene was quiet. A few times we scared small flocks of mergansers up out of the river, and once we startled a ptarmigan from the riverside willows. In the mid-afternoon we spotted a caribou herd cooling itself on a far-off ice sheet. Even from a distance, we could pick out the signature sweep of their antlers (which both bulls and cows sport), the U-shape reminiscent of a football goalpost. But we saw nothing like the herds of biblical proportions from the day before. The land was empty and still.

We had been in the great wilderness for only a day, and already the place had disoriented me. At the top of the world at the height of the summer, direction had become all but meaningless as the sun refused to set. The never-ending light had also blown apart my sense of time, turning a.m. and p.m. into abstractions. My grasp of distance had dissolved, too. Without any trees to speak of, it was impossible to get perspective, to tell if something was half a mile or three miles away. The landscape was oceanic; if I looked hard enough at the distance it seemed like I could see the girth of the globe. It was the kind of wilderness that causes a psychic vertigo.

As we beached the rafts and set up camp, a few of us tried to make sense of what we had experienced so far. “It’s just beautiful. It’s like a great painting,” said Shirley, an avid watercolor painter. “It does something chemical to the brain. The space—it’s so huge, it makes you feel inconsequential. You realize that we’re not in control.”

Rue had a similar take: “Out here, our will doesn’t mean that much. Think of that grizzly bear. We’re not at the top of the food chain. Stripping away all of the noise of our daily lives”—no doubt a welcome relief for a woman who has three kids at home—“you have to face yourself, you have to set aside your ego. Think about Jesus, and John the Baptist. They went into the wilderness to get clarity of purpose.”

Me, I needed more time to think and to be by myself. As the rest of the group started making dinner, I set out to hike up a small hill that looked to be about a mile away (turned out to be more like two). From a distance, the tundra appears flat and even, but up close it’s a different story. I soon found that the land was split by depressions and small humps, the result of millennia of frost heaving and summer melt. Technically, the tundra is a desert; in an average year the North Slope receives just seven inches of precipitation. But because of the permafrost there’s nowhere for the water to drain, and so precipitation collects in the first couple of inches of soil, making the tundra a weird kind of swamp.

The plain, I quickly discovered, was dotted with sedge- and rush-filled bogs that appeared without warning. In other areas, the turf was propped into fields of tussocks—foot-wide mini-mounds rising up like mushroom caps. To walk cross-country meant either slaloming among the tussocks (a squishy affair that quickly resulted in soaked boots) or else trying to bound from one to the other (which felt like being dropped into the original Super Mario Brothers video game). Bouncing from tussock to tussock was like walking on a spring-loaded carpet. No matter which approach I tried, navigating the terrain was exhausting.

I hadn’t gone far when I realized that (as Barry Lopez points out in his book Arctic Dreams) on the tundra you’re walking on top of a forest. I bent down to inspect. On each tussock there were as many as four or five varieties of salix—that is, willow. But the willows were no more than three inches tall. Alongside these dwarf “trees” were several different types of grasses, and among the willows and grasses grew a lilliputian universe of moss and lichen. The mosses came in a psychedelic rainbow of colors: dusky sage, forest green, glow-stick green, rust, orange, pink.

The flowers were also miniature. There were patches of tiny pink moss campion, delicate purple cress, and the small white bulbs of moss heather. Among a clutch of mini-willows I found pink shooting stars just like the ones we have in California, only the bloom was shrunk to a quarter of the size. The elven-scale world underfoot felt incongruous with the gigantism of the open plain and the epic mountains, and as I watched the dances of the small Lapland longspurs (a bird practiced at cuckoldry), I had to laugh: such tiny dramas, enacted against a heroic backdrop.

I was marveling at the scene when I spotted a single caribou across a stream draw about a half-mile away. As I reached for my binoculars, a flash of white darted into view. The caribou easily outran its aggressor, and there was no chase. I glassed the hillside and saw it was a red fox that had caused the caribou to run. It was by far the biggest fox I had ever seen—from a distance it looked to be the size of a California coyote. Cinnamon red, with a large, bushy tail tipped white. I watched as it made figure-eights across the slope, hunting for the nest of a gull that was dive-bombing it. Frustrated in its egg search, the fox headed southward. I followed the fox with my binoculars as it trotted through a swath of tundra where a large herd of caribou had passed not long ago (leaving the ground trampled and grazed to a softer shade of green) and then crossed over a hill and out of sight.

When I got back to camp, I was excited to report my fox sighting. Ritzman and Peter, a couple of longtime Alaska hands, weren’t all that impressed. But they were somewhat surprised. It was unusual, they said, to see a red fox this far north. Perhaps, they told me, it had something to do with climate change. Recent studies had revealed that as the weather warms, the red fox’s range had expanded farther and farther onto the tundra.

The red fox’s larger range has been a detriment to its smaller cousin, the Arctic fox. Red foxes had been seen digging into the dens of Arctic foxes to kill the kits and sometimes even the adults. The news brought to mind a line from a report by the International Panel on Climate Change: due to global warming, “entire ecosystems will be forced to move, colliding with each other.”

What had seemed a wonderful wildlife sighting took on a darker cast, making me think that what I had seen was something—I guess you could say—unnatural. Due to human activities thousands of miles away, the Arctic fox was becoming a casualty of climate change, much like the polar bear. But instead of mating with its nemesis to create the vulpine version of a pizzly bear, the Arctic fox was ending up as supper.

What could be done? What should be done? Was it time, perhaps, for humans to intervene, for state or federal wildlife officials to begin hunting the red foxes in order to even out the contest? That might sound absurd—hunting one species of fox to save another. Yet that’s exactly the kind of soul-searching dilemma conservationists face in the Anthropocene. The Human Age has thrown us into a terra incognita that we are having to learn to navigate on the fly. Increasingly, we don’t just conserve ecosystems—we curate them. In the process we are forced to make life-and-death decisions about what we hope to protect and preserve, what we’re willing to stave off and suppress.

From Satellites in the High Country by Jason Mark. CHAPTER SIX: Fall of the Wild? Copyright © 2015 Jason Mark. Reproduced by permission of Island Press, Washington, D.C. 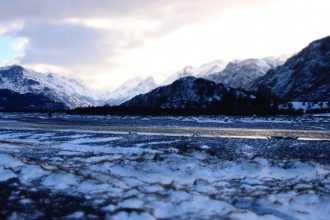 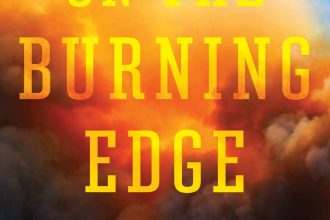 Book Excerpt: 'On the Burning Edge'