To a dogged Michigan township supervisor, the recent decision by a Texas company to scrap plans to run a natural gas pipeline across the property of hundreds of landowners shows that people can fight—and win.

Atlas Township Supervisor Shirley Kautman-Jones said she believes the voices of outraged residents were heard loud and clear by Dallas-based Energy Transfer Partners when it decided to abandon plans for its ET Rover pipeline in six central Michigan counties.

“Never underestimate the power of determined people,” she said.

Energy Transfer Partners, parent company of ET Rover Pipeline LLC, has announced a deal to pump natural gas though an existing pipeline instead of building a new line across the six counties, which would have meant condemning private property and months of disruptive construction.

Opposition to the pipeline mobilized quickly last year––much of it from people already beleaguered by losing a three-year fight against Enbridge Inc. oil pipeline 6B. Township boards and county commissions passed resolutions opposing the pipeline. Rallies stirred locals to action. Federal regulators were inundated with letters against the project while state, local and federal lawmakers were besieged by demands to halt the pipeline.

“We were ready to fight and knew just how to fight this time,” Kautman-Jones said.

ET Rover announced earlier this month it had struck a deal with Vector Pipeline  to ferry natural gas though an existing pipeline along a 110-mile corridor of  southern Michigan where the company had originally proposed constructing a new pipeline. Vector is operated by DTE Energy and Enbridge, the Canadian company that has been engaged in fierce battles with Michigan landowners over the construction of Line 6B.

In announcing the decision, ET Rover made no reference to the opposition.

Instead, the company said in a news release that the new plans are “consistent with Rover’s ongoing efforts to minimize the project’s footprint.” The company also said the new plans in line conform with the Federal Energy Regulatory Commission’s guidelines that encourage alternative routes that use existing utilities.

Vicki Anderson Granado, a spokeswoman for ET Rover, said the company had long been considering the partnership with Vector.

“The agreement allows us reduce our footprint and provide enhanced opportunities for the gas to reach Michigan consumers via Vector’s broad network of connections with local distribution companies,” she said.

The new ET Rover pipeline, coupled with the use of the Vector line, is expected to carry more than 3 billion cubic feet of gas a day from wells in Pennsylvania, West Virginia and Ohio to Midwest markets, including Michigan.

The 15-year-old Vector Pipeline originates near Chicago and transports natural gas to parts of Indiana and Michigan before terminating in Canada.

This is the second time the ET Rover pipeline route has changed in the face of opposition. After the company released maps last year showing its pipeline would cut across pubic land and through the backyards of residents in Oakland County, the company picked an alternative route—one it felt would offer the path of least resistance, Kautman-Jones speculated.

“But they were wrong,” she said.

Steve Woolpert, dean of the School of Liberal Arts at Saint Mary’s College of California, said Rover’s decision to find an alternative is a textbook example of the way coordinated public opposition can make a difference.

“If the public’s voice is loud enough, focused and sustained, it cannot be ignored,” said Woolpert, who has taught courses on environmental politics, government and public policy.

He said the company undoubtedly conducted a cost-benefit review of the project that would have factored in the unrelenting opposition. Rover’s decision to restructure its plans may have had more to do with economics than sympathy for people and their fears, he said.

“Here’s a private firm and they made a decision based on their reading of the risk factors associated with pursuing their original project,” he said.

“They would have considered increased delays and cost associated with the opposition. Once that became part of the equation, they made a business or economic decision.”

But that doesn’t diminish the power of public resistance, he said.

“The lesson is that organized communities have a great likelihood of having their voices heard,” he said.

When the company made its announcement earlier this month, residents along the pipeline’s proposed route found cause for celebration.

Although it was time for celebration for some, it wasn’t for others.

ET Rover’s plan doesn’t spare everyone. Blueprints for the pipeline still show it being built across 100 miles in three Michigan counties––Lenawee, Washtenaw and Livingston––before it hooks up with the Vector line.

That construction still requires approval from federal regulators, and residents have pledged to continue their rebellion.

John Ford, a Washtenaw County resident who owns 140 acres of farm land that will be crossed by the proposed ET Rover pipeline, said he has been emboldened by the success of opponents in other counties.

“The more we fight, the more we’re heard,” he said.

Ford is angry that the pipeline company could take a swath of his land for what he says is minimum compensation for a project he doesn’t believe is necessary. 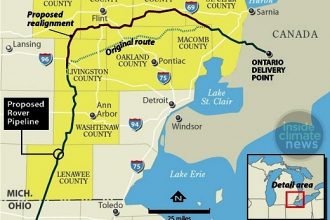 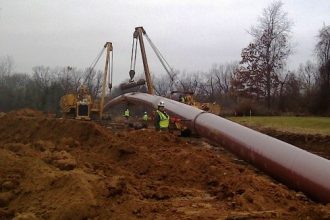