People in Michigan’s Oakland County were ready this time. When a Texas-based company announced plans for a natural gas pipeline that would bisect the county, township boards in Oakland County passed resolutions against it. Rallies stirred locals to action. Federal regulators were bombarded with letters against the project.

Two months after ET Rover revealed maps showing that its pipeline would cut across pubic land and through backyards in Oakland County—and only a few weeks after the first opposition appeared–ET Rover chose an alternative route north that touches only a tiny slice of Oakland County.

“We weren’t going to let this happen again,” said Kathy Thurman, the Brandon Township supervisor who heard from community members that they’d had enough of the turmoil caused by earlier pipeline projects. Brandon Township is in Oakland County.

Like Thurman, other local officials and residents were fresh from a bruising battle with Enbridge Inc. over the installation of a replacement for pipeline 6B that ruptured in 2010, spilling more than one million gallons of oil into the Kalamazoo River. Although they lost several court battles in their effort to stop the $1.3 billion replacement project, the experience helped them form the foundation for resisting the ET Rover project.

This time people weren’t just up in arms. They were organized, like a battle-tested army.

“That frustration and the painful experience it produced have led many landowners to be far more active with [ET Rover] than they were with Enbridge,” said Jeff Insko, an associate professor of American literature at Oakland University and author of the Line 6B Citizens’ Blog. “Sharing information, supporting and educating one another, and speaking up has clearly been empowering.”

Insko used his blog to rally the opposition: “We won’t sit by and allow yet another company to take private property for their own gain with very little if any benefit to Michigan and its citizens,” he wrote at one point.

Almost as soon as ET Rover filed a notice with the Federal Energy Regulatory Commission (FERC) in June of its intent to construct the pipeline, Oakland County opponents swung into action. In August, with no explanation for the pipeline’s new path, the company quietly revised the route it had filed with FERC.

Vicki Granado, a spokeswoman for ET Rover, said the company heard the protests but placed significant weight on its own land surveys that showed the pipeline’s route was drawn though some developed areas, and conflicted with roadways and other utilities.

“We certainly listen to all parties, but what really is our driving factor is the survey information,” she said.

But Jeff Axt, who was among the leaders of a group that opposed Enbridge, thinks ET Rover heard the protests loud and clear.

“They saw the kind of fight that was ahead for this pipeline and they didn’t want to go there,” said Axt, who helped form Protect Our Land And Rights (POLAR). “We were ready this time…We came away [from the Enbridge fight] with the idea that if we organize and focus our arguments, then we can make a difference.”

Grassroots activism can be a powerful tool, especially when it is focused, embraces a sensible message and is delivered with emotion, said Ronnie Lipschutz, a professor of politics at the University of California, Santa Cruz.

“There is significant empowerment when a group of people come together who are passionate about an issue,” Lipschutz said. “With the right mix of emotion and purpose, people can succeed in achieving their objectives.”

The 365-mile ET Rover pipeline is designed to move 3.5 billion cubic feet of gas a day from the Marcellus and Utica shale formations in Pennsylvania, West Virginia and Ohio to Ontario, Canada, according to its filing with FERC, which conducts environmental reviews of proposed interstate pipelines and weighs public comments about a project.

Steve Woolpert, dean of the School of Liberal Arts at Saint Mary’s College of California, said a company like ET Rover may not be sympathetic to the concerns of those opposing the pipeline but it is certainly attuned to the economic implications of a growing opposition movement.

“It becomes a tactical question: What is the most effective and efficient way to get the pipeline done,” said Woolpert, who teaches environmental politics, government and public policy. “They have to weigh the pros and cons of pushing back versus considering an alternative route that’s not going to find the same level of opposition.”

Usually, putting up a fight means more expense because projects are delayed, legal bills against challenges add up, and a company’s image is tarnished.

“So when opposition forms and is well organized, a company is likely to step back and do a cost analysis and look for the next best alternative,” Woolpert said.

ET Rover soon found an alternative route for the pipeline in neighboring Genesee and Lapeer counties, where people hadn’t experienced the same as aggravation as people in Oakland County over the Enbridge 6B project.

Atlas Township Supervisor Shirley Kautman-Jones said she has no doubt ET Rover saw her county, Genesee, as a path of least resistance.

“They couldn’t get through Oakland County, so they looked north to us as some place they could just push through,” she said.

ET Rover swept into the county with only the minimum required notice and quickly set about marking a path for its pipeline. “This has happened so fast that we haven’t had time to organize against it,” Kautman-Jones said.

Tensions are so high in Genesee County that one resident confronted ET Rover surveyors on his property with a shotgun. ET Rover has responded with armed security guards and now approaches landowners with documents saying the company has a legal right to be on their property.

Kautman-Jones has been trying to rally residents to file protests with FERC, but she and township staff have had to take time to explain the process patiently. She is advising landowners to contact attorneys and read everything from ET Rover very carefully.

At a recent Atlas Township meeting, Kautman-Jones invited Brandon Supervisor Thurman to share her experiences in the fight against Enbridge and the successful opposition to ET Rover.

“We have to educate our people fast on how to respond,” Kautman-Jones said. 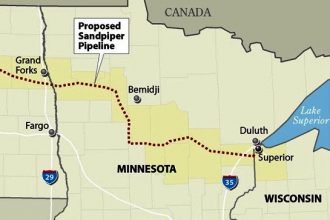