First Harvey, then Irma, and the hurricane season isn’t over. This is the year that repeated, dire predictions about the fiscal risks of climate change—its increasingly heavy burden on the federal budget—are coming true.

The hurricanes’ successive blows may cost taxpayers more than they spent on relief and recovery in any previous year. And that doesn’t factor in the price for this year’s other disasters—heat waves, droughts, fires and floods—that are among the hallmarks of global warming.

“The magnitude of the damage is getting bigger,” said Adam Rose, a research professor with the University of Southern California’s Price School of Public Policy and an expert in the economics of natural disasters. “What does it mean for the federal treasury? It means we’re likely to see a greater burden on federal and state governments to help people. You can’t just leave people who’ve suffered a disaster. You can’t abandon them.”

For the past decade, the government’s fiscal watchdogs have warned that these costs were bound to increase as the effects of climate change arrive.

They included the Government Accountability Office (GAO), which put climate’s fiscal impacts on its “high risk” list a few years ago; the Office of Management and Budget, which at the end of the Obama administration spelled out the mounting problem and warned that a comprehensive approach was needed to soften the blow; and the Congressional Budget Office (CBO), which focused specifically in 2016 on the mounting risks of hurricanes.

With relief operations after Harvey’s record-smashing floods just getting under way in Texas, and Irma, the most powerful Atlantic storm ever witnessed, still howling through Florida on Monday, it’s too early to say just how much these two storms will cost taxpayers.

On Friday, President Donald Trump signed a bill that provides $15 billion in immediate hurricane relief—an amount that clearly will not cover the damage but was intended to stop the agencies from running out of cash in just a few days.

The Estimates: How Much Will This Cost?

Early estimates of the combined damage from the pair of record-breaking storms could reach $290 billion—nearly a quarter of the total costs of all natural disasters in the United States from 1980 to this year. That doesn’t account for the wildfires and extreme heat burning up the American West, or the nine major disasters—including drought and floods—that hit the country from January to July.

The National Oceanographic and Atmospheric Administration’s (NOAA) first estimate of the damage from Harvey and Irma will come out in early October—and those numbers will be conservatively low. FEMA’s preliminary estimate released on Monday as the storm was exiting the state put the cost from just wind damage at over $14 billion in Florida, but it will take months and years to tally the total damage.

We Were Warned — in Several Federal Reports

In recent years, government reports have uniformly projected that costs—both the overall damage and the government’s tab—from natural disasters, including hurricanes, will rise.

“Climate change is driving sea level rise and more intense hurricanes, amplifying the probability of catastrophic storm damages each year in America’s coastal communities and posing a significant fiscal risk for the federal government,” said an Obama administration Office of Management and Budget report from 2016.

A CBO report, also from 2016, said that total economic damage from hurricanes alone would be $120 billion higher per year by 2075 than today, and that climate change drives about $80 billion of that.

The GAO has said that the federal government needs a more cohesive strategy to protect against financial risks posed by climate change, and should incorporate climate change in environmental reviews and flood risk in infrastructure projects, among other steps. (The Trump administration rescinded an Obama-era rule requiring the latter 10 days before Hurricane Harvey struck.)

The Federal Flood Insurance Program, meanwhile, is already $25 billion in debt, thanks to Hurricane Katrina and Superstorm Sandy. The program—which covers about 5 million policies, 1.7 million of them in Florida—expires at the end of this month.

Even These Estimates Could Be Low

Those government projections of future damage are likely on the low side.

“In general, it’s very difficult to make any kind of long-term projections, and there are a number of reasons for why the U.S. government estimates could be too low,” explained Tatyana Deryugina, an assistant professor at the University of Illinois who studies the economic impacts of disaster.

“Of course, climate extremes have huge variability, so you won’t be hit by extreme events every year,” said Tobias Geiger, a researcher with the Potsdam Institute for Climate Impact Research who studies the economic impacts of extreme weather. “But climate variability is not vanishing. It’s just pushing up the extremes to higher values.”

Geiger noted that the CBO’s $120 billion estimate incorporates the idea that people will be richer in the future and GDP will rise. But he noted that the CBO report says .18 percent of GDP will be affected by hurricanes, on average.  Based on his rough calculations, .11 percent of GDP is being affected by hurricanes today. That’s a 60 percent increase.

Any rise in the number of extreme events would follow a trendline that’s been moving upward for decades.

According to NOAA’s National Centers for Environmental Information, from 1980 to 2016, the average annual number of $1 billion events in the U.S. was 5.5, but from 2012 to 2016, the number of billion-dollar events was 10.6, on average. In the first half of this year, before the hurricanes and wildfires, the U.S. had already experienced a “rapid succession of disaster events,” totaling nine.

Adjusting for inflation, four of the five years with the most billion-dollar extreme weather events in the United States have occurred since 2010. (NOAA says Hurricane Katrina cost $160 billion—the most of any disaster in U.S. history, and it may be eclipsed this year.)

NOAA estimates that total damage—which includes disaster relief, government insurance payments, property damage and interruptions to business—of all natural disasters from 1980 to July of 2017 has totaled $1.2 trillion. (This figure only includes disasters that caused more than $1 billion in damage.) Of that $1.2 trillion, hurricanes account for nearly half.

Not all those costs are borne by the federal government, but many are: the 17 federal agencies that handle disaster relief committed nearly $278 billion to disaster relief and aid programs from 2005 to 2014.

“It’s very reasonable to assume that we’re going to have an increase in the number of these types of disasters, and of course that will cost a lot more,” said Christina Deconcini, director of government affairs at the World Resources Institute. “It’s not actually a conservative way to approach things. We’re not investing in infrastructure. We’re not giving FEMA the right tools. So on the most basic level, we’re not doing what we need to do to help people make good decisions.” 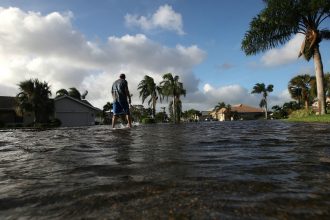