For months, the Environmental Protection Agency and its supporters among diplomats and policy experts have been arguing that even a temporary block of the Clean Power Plan would imperil the newly drafted Paris Agreement on climate change.

Other countries, they said, would begin to doubt the emissions reduction pledges that the United States made during negotiations on the new treaty, given that the plan’s reductions in carbon pollution from coal-burning power plants would play a key role.

Now, since the Supreme Court sent a shock wave through legal circles by granting a stay of the regulations until all appeals have run their course, supporters of the regulations are backing away from that argument as fast as they can.

There’s a good chance, they are saying, that emissions will continue on a downward path consistent with the U.S.’s international obligations regardless of the new rule’s legal fate.

“Carbon pollution from the electric sector has been declining over the past several years,” said Joanne Spalding, chief climate counsel of the Sierra Club. “And as we transition from dirty fossil energy to clean renewable energy that trend will continue independent of the Clean Power Plan.”

“The Supreme Court’s order staying the plan will not affect our ability to achieve our international commitments,” she said.

This new line is, at best, an awkward one, because the EPA and its allies previously made no bones about the close link between the regulations and the international treaty.

“Based on my experience as the lead U.S. climate negotiator,” wrote the State Department’s Todd Stern in an affidavit supporting the EPA rule last year, “I believe that the ambition and implementation of many other countries’ current and future emission control actions depends significantly on the understanding by their leaders of the seriousness of the U.S. commitment to address emissions.

“For many countries, willingness to take action depends on collective trust that the major emitters are taking action. If a stay of the Clean Power Plan is granted, there is a real threat that some other countries, including major emitters, might reduce the intensity or pace of their actions or even fail to achieve their commitments.”

Madeleine Albright, the former secretary of state, elaborated on this in her own statement, one of many submitted by environmental advocates to the U.S. Court of Appeals for the District of Columbia Circuit, which in January turned down a request for a stay brought by more than two dozen coal-friendly states.

A stay would “irreparably undermine the international commitments and momentum to finally begin curbing the greenhouse gas emissions that are driving extremely dangerous climate change across the globe,” Albright concluded.

“Specifically, a stay of the Clean Power Plan would likely cast doubt on the ability of the United States to achieve domestic emission reductions and lead other nations to delay implementing emission reductions. Such a loss of momentum could quickly snowball, causing more nations to signal their intent to delay. If the loss of momentum were great enough, it could not be repaired even following a decision on the merits upholding the Clean Power Plan.”

“We disagree with her analysis,” said John Coequyt, the Sierra Club’s director of federal and international climate campaigns, in a discussion of the Supreme Court’s action by a group of environmentalists.

Last November, as Albright and Stern were filing their briefs, a Sierra Club report predicted that electricity producers would meet the Clean Power Plan’s emission targets five years ahead of schedule. It was based on the club’s “Beyond Coal” campaign objective of retiring and replacing half of the nation’s remaining coal fired plants with clean electricity.

“It is not the case that the Clean Power Plan is driving all the change,” Coequyt said. He said the early emission goals in the plan—those that would satisfy the Paris pledges in the coming decade—were “absolutely” within reach.

Indeed, the combination of tighter controls on other pollutants like mercury, competition from cheap natural gas, and booming investment in wind and solar are pushing coal aside already, long before the Clean Power Plan deadlines arrive.

Environmental groups say that emissions reductions are even more likely since Congress, in a budget deal with the White House, extended tax breaks for wind and solar power for a few more years.

But it is hard to see how this optimistic outlook becomes more certain with the addition of the uncertainty caused by the Supreme Court decision.

The U.S. committed in Paris to reduce its overall emissions of greenhouse gases by up to 28 percent by the year 2025. The Clean Power Plan was meant to put electricity emissions on a glide path toward 32 percent reductions by the year 2030. (The reductions are from the base year 2005.)

But the emissions cuts from electric plants, unless matched in transportation, homes and commercial building, agriculture and forestry, manufacturing and other industries, are not enough to achieve the Paris goals. And in Paris, everybody conceded that the combined pledges by the United States, China, Europe and all the other nations still fall short of what’s needed to keep global warming within relatively safe levels.

In a few short years, nations that sign the Paris pact this year will be asking each other to do even more. Any delay in the Clean Power Plan complicates that prospect.

Alden Meyer, a veteran observer of climate negotiations from the Union of Concerned Scientists, said that in meetings with international colleagues he sensed a “nervousness” that the U.S. might end up having pushed the world into an agreement that it lacked the will to sustain.

But he said he also sensed “a general willingness to wait and see how this plays out in the months to come.” 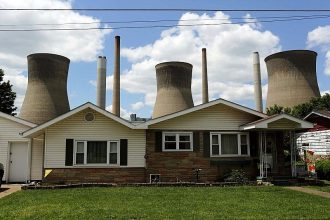