After sampling the region’s air in 2012 and again in 2015, researchers found that methane levels had increased from 1,960 parts per billion in 2012 up to 2,060 in 2015, according to a study published Thursday in the journal Elementa: Science of the Anthropocene.

During that span, the region’s drilling boom slowed and natural gas production ramped up. The researchers said this shift in gas activity is possibly to blame for the spike in methane levels.

“The rapid increase in methane is likely due to the increased production of natural gas from the region which has increased significantly over the 2012 to 2015 period,” Peter DeCarlo, an assistant professor at Drexel University and a study author, said in a statement. “With the increased background levels of methane, the relative climate benefit of natural gas over coal for power production is reduced.”

Methane is a potent short-lived climate pollutant. Its emissions have been hard for regulators to quantify, with the EPA only last year beginning to target reductions from oil and gas production.

Also last year, the Obama administration released new rules to reduce methane leakage, but the Trump administration has targeted many such rules for repeal.

DeCarlo and his colleagues drove around northeastern Pennsylvania in a van equipped with air monitoring equipment. They measured what’s called background concentrations of methane and other chemicals in August 2012. Researchers used a different van, and took a different driving route, for their monitoring expedition in August 2015.

While most of the air samples were collected in different locations during the two research trips, there was some overlap. One of the areas that overlapped revealed a slightly higher increase in methane levels (an approximate increase in 125 ppb) than was observed across the full study area (about 100 ppb).

The study also showed that carbon monoxide levels decreased between 2012 and 2015. Researchers suggest this too is a possible result of the region’s transition away from so much gas development—which involves lots of truck traffic that can be a big source of carbon monoxide. 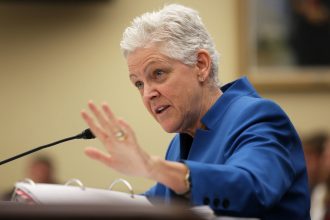