Bernie Sanders wasn’t the only victor in New Hampshire on Tuesday.

Amid the over-the-top politicking that has come to define the first-in-the-nation primary, climate change rose from obscurity to a place among the top issues for Democratic voters. That marks a win for activists and several extraordinary campaigns in New Hampshire to elevate the recognition of climate as a crisis requiring political action.

With tidal flooding increasing on the coastline, and wildlife—including the iconic moose—visibly dwindling, New Hampshire has had ample opportunity to witness first-hand the impacts of climate change. But what has moved voters most of all, say many activists, is the risk they perceive in President Donald Trump’s aggressive policy that puts fossil-fueled expansion above environmental protection.

“Prior to 2016, environmentalists often viewed environmentalism in apolitical ways—changing the way you go to work, the way you consume electricity. They rarely thought about voting,” said Nathaniel Stinnett, founder and executive director of the Boston-based Environmental Voter Project. “What I think started to happen dramatically in 2016 is that people who cared deeply about the environment recognized they had no choice but to view it through a political lens.”

New Hampshire is one of a dozen states where Stinnett’s organization has been working in this election cycle to identify environmentalists and get them to the polls. All 12 states have had a relatively high number of non-voting environmentalists, the Environmental Voter Project determined, based on voter rolls and the same sorts of Big Data techniques the presidential campaigns use to target their ads.

Sanders, whose $17 trillion climate plan far outstrips those of his competitors, and who had strong support from young voters and youth-centered campaigns, clearly was one beneficiary of this surge in interest. But he wasn’t the only one. According to the Washington Post’s exit polling, 30 percent of voters who viewed climate change as their top concern supported Pete Buttigieg, making the South Bend, Ind. mayor the top candidate for climate voters. Although Buttigieg drew flak at times on the campaign trail from climate protesters who felt his $2 trillion plan was too weak, he always mentioned climate change in his stump speech as first among the “big issues” that he said he was dedicated to resolve as president.

“I took the fossil fuel pledge and I am determined to bring about solutions on climate change,” Buttigieg told hecklers. “We want the same thing. Are we ready to do what it’s going to take to actually come together and solve these problems?”

With Sanders victorious and the moderate vote split between Buttigieg and Amy Klobuchar, the results from New Hampshire showed Democrats still divided over whom they want as their 2020 standard-bearer. But the success of activists to elevate climate change as a voting issue in this election was apparent, based on how often candidates invoked their plans to tackle global warming on the campaign trail.

“I am confident that the reason so many candidates are talking about it is that they’re no dummies,” said Stinnett. “They can read a poll.”

Stinnett’s Environmental Voter Project, founded in 2015, does not campaign for any particular candidate—in fact, it doesn’t even mention the environment or climate change in its messaging. Instead, it targets non-voting environmentalists and campaigns to get them to the polls. Once a person has voted, he or she is considered a “likely voter” and inevitably will be targeted by political campaigns. The Environmental Voter Project is reaching out to people who don’t vote and are currently being ignored by the candidates.

The group has estimated that it was able to add 59,000 new environmental voters to the voting rolls in Colorado, Florida, Georgia, Massachusetts, Nevada and Pennsylvania, the six states where it campaigned in the 2018 midterms. That’s a number that could make a big difference, given that Trump won the election by 80,000 votes in three states. The project’s research indicates that there were 10 million environmentalists across the nation who didn’t vote in the 2016 election.

“We live in a time where it is increasingly challenging to change anybody’s opinion on climate change,” said Stinnett. “But that’s not the problem we’re trying to solve. There are already millions who believe that climate change is a number one problem. We are focused on getting them to vote. And changing behavior is easier than changing minds or opinions.” The Environmental Voter Project made contact with close to 40,000 voters in New Hampshire.

Other groups were focused on another low-turnout cohort—young voters. Both 350 New Hampshire Action and the Sunrise Movement, which has endorsed Sanders, had hundreds of volunteers making calls, knocking on doors and showing up at candidate rallies in New Hampshire. And a home-grown group, the New Hampshire Youth Movement, which has its roots in the fossil fuel divestment movement at the University of New Hampshire, estimates that it obtained pledges to vote from more than 11,000 young people since September.

Griffin Sinclair-Wingate, a founder and co-director of operations for group, said the effort grew out of the impact that young people had on the 2016 election in the state (Hillary Clinton won the state by 0.3 percent, while Democrat Maggie Hassan unseated the state’s Republican Senator, Kelly Ayotte, by less than 0.1 percent.)  “Young people made up the margin of victory,” said Sinclair-Wingate.

But when all the outside activist groups that swarmed New Hampshire left the state after Trump’s victory, he said, he and his colleagues in activism recognized a need for a group that would stay on the ground, organizing, beyond Election Day.

“You had people all over New Hampshire who were terrified of the Trump presidency, who were looking for a way to plug in to something, and there was no organizing structure there to give them a home,” Sinclair-Wingate said. “We felt we could never let that happen again. We set out to create an organization that works before, during and after an election, to make sure not only do we elect politicians who represent young people, but we hold those politicians accountable.”

Although he supports Sanders and believes he has the strongest climate program and the best chance of defeating Trump, his group is determined to continue its drive to energize young people in the state to be politically active through November and beyond.

Recognition of climate change as an urgent issue has also increased among older and more conservative New Hampshire residents, said Eric Orff, who worked as a wildlife biologist for the New Hampshire Fish and Game Department for 31 years. After he retired in 2007, he was recruited by the National Wildlife Federation to engage sportsmen and women and the hunting community in the state on climate change—an issue he had been writing and talking about for years.

“I thought I was in pretty good standing with the sportsmen, and I’d have no trouble—was I wrong!” he recalls of his first efforts more than a decade ago. “I gave a talk to a couple of hundred, and I knew many of them…Some of them walked out—’I’m not going to listen to this bull-crap. That’s Al Gore’s crap.’ It was a real uphill battle for a long time.”

But Orff, along with other wildlife biologists, continued their outreach to the sportsmen, giving presentations across the state several times a month for years. The climate impacts that they were talking about hit home to their audiences, especially charting the demise of New Hampshire’s beloved moose population, which numbered 7,500 in 2000, and has dwindled to about 3,000 today. A dozen years ago, the state Fish and Game Department issued 670 moose-hunting permits; the number was just 49 last year. The drop-off in the moose population also has hit the economy, with business falling for guides, lodges, and other businesses associated with hunting.

“People just seem to look at the moose—this magnificent animal—that was just part of the fabric that made up New Hampshire, and because of climate change, that fabric is unraveling,” said Orff.

Orff, making it a point to attend candidate forums in person, said he was impressed that all the candidates seemed to have strong climate plans—including Trump’s super long-shot Republican challenger, former Massachusetts Gov. William Weld. “It took a decade,” said Orff, “but I’d say now a significant number of the sportsmen, and a majority of the citizens of New Hampshire feel that climate change is real.” 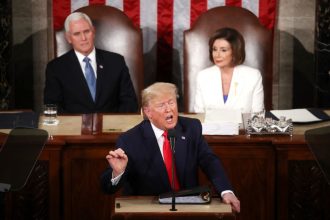 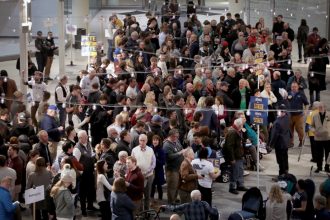