Air pollution data recently released by the World Health Organization reveals that the majority of cities breathing the unhealthiest air are located in China and India, with a swath stretching across the Middle East and into Eastern Europe.

The WHO data is not comprehensive—with virtually no data from Russia or large swaths of Africa or South America—but it illustrates the impact of decades of regulation in North America, Europe and Australia, where air quality is generally better.

“One of the great gifts we have [in the U.S.] is the Clean Air Act,” said Janice Nolen, vice president of national policy at the American Lung Association. She said it’s easy to forget how air pollution in the U.S. was once as bad as it is now in Asia. “When you look at pictures of this country from the 1940s, 1950s and 1960s, [the air] was hazy, just like what you see in these international photos.”

The U.S. and Europe have “made a strong push to improve air quality over the past 15 years,” said Kirsten Koehler, an environmental health sciences professor at Johns Hopkins University. “So what we see is the impact of those policies that have been put in place.”

InsideClimate News used the WHO database to map the cities with the highest annual average  concentrations of particulate matter (PM)—a mixture of dust, soot and microscopic particles that cause respiratory and cardiovascular disease.

This sobering picture is expected to  get worse with climate change, as wildfires and dust storms driven by rising temperatures release additional pollution. According to Nolen, even developed countries, where PM levels generally meet health guidelines, will struggle to keep PM in check.

Click and drag on the maps below to change locations, or zoom in and out using the “+” and “-” buttons. Hover over the individual cities to see more detailed PM data.

The maps only included the most reliable data points (click here for an explanation of our methodology).

We found that most of the cities with the worst PM2.5 levels were in China, which measures PM2.5 more frequently than it does PM10. India, on the other hand, rarely measures PM2.5, and dominated the list for the worst PM10 cities.

Nolen said Asia’s high PM levels are a result of rapid industrialization and the continued reliance on burning wood for energy in rural areas.

Even countries with generally cleaner air are at risk.

In the U.S., southwestern states are particularly vulnerable, as increased heat waves, drought, and decades of poor forest management create ideal conditions for wildfires. According to the National Climate Assessment, global warming was the single largest factor driving western U.S. fires from 1916-2003.

A 2012 wildfire near Fort Collins, Colo., led to such high PM levels that local air monitors “assumed it was wrong” and delayed reporting the data, according to Koehler.

After a series of wildfires in Quebec sent a plume of smoke and particulates into New York, Pennsylvania, and other mid-Atlantic states in 2002, researchers at Johns Hopkins linked the pollution to increased hospitalizations for respiratory and cardiovascular illnesses.

A recent report from the International Energy Agency found that investing an additional 7 percent in energy projects that reduce harmful air emissions could halve global air pollution-related deaths by 2040 and enable CO2 emissions to peak by 2020. 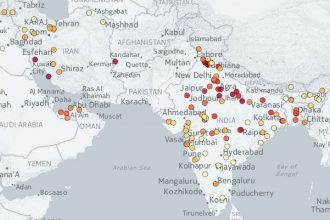 Methodology for Mapping the Cities With the Unhealthiest Air 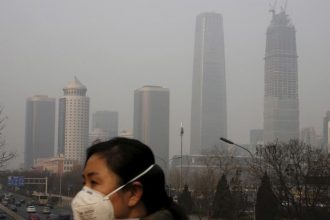 IEA: Shift to Clean Energy Could Save Millions Who Die From Pollution 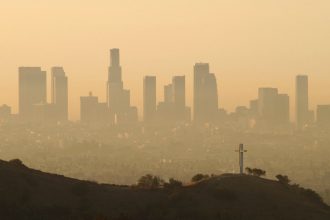