A handful of U.S. utilities have discovered they can save money by encouraging small rooftop solar projects—the same projects utility industry leaders have insisted were too expensive and unreliable to be practical.

The Long Island Power Authority (LIPA) in New York, for instance, is paying developers to build solar panels on top of buildings in tiny towns that are experiencing population booms but don’t have enough electric grid infrastructure to bring in the electricity they need. The pilot initiative will allow the utility to avoid spending more than $80 million to build new transmission lines and grid equipment.

The program reflects some utilities’ changing relationship with distributed generation, or DG, the name for small-scale energy generators like solar systems and micro wind turbines that produce electricity close to where the power is used.

Many of the nation’s 3,200 utilities have resisted distributed generation, partly because they believe the small projects would cut into their profits. Private utilities make their money by investing in infrastructure—mainly massive centralized power plants and high-voltage transmission lines—and then charging customers enough to earn that money back with a guaranteed return. Distributed generation shakes up this century-old model by shifting control of electricity from utilities to smaller developers, communities or individuals, who produce power onsite and rely less on traditional grid infrastructure to keep the lights on. This, in turn, reduces the returns that utilities collect.

In Germany, distributed generation has been the backbone of a national clean energy overhaul that has turned that nation into the world’s largest solar market. Nearly half of Germany’s renewable power is owned by private individuals or farmers, while in the United States customer-owned generation is still less than 5 percent of the clean energy market.

The Edison Electric Institute, the U.S. utility sector’s main trade group, wrote in a recent report that locally produced clean energy is a “disruptive challenge” to utilities that is likely here to stay.

Long Island Power’s embrace of distributed generation may not be surprising, given its progressive policies on renewables. Last year, LIPA enacted one of the country’s few feed-in tariffs, a policy to attract renewable energy investors in decentralized projects. It is also a non-profit municipal utility and a state-owned enterprise. Meaning, compared to private utilities that are held liable to investors, it’s somewhat easier for LIPA to take risks with clean energy and unconventional programs.

Other major U.S. municipal utilities, including the Los Angeles Department of Water and Power and Austin Energy in Texas, are also betting on distributed generation to improve grid operations.

“I would be really surprised if there aren’t quite a few more utilities who pick up on this,” said John Farrell, a champion of distributed solar and a senior researcher at the Institute for Local Self-Reliance, a nonprofit advocacy group. If the programs work as promised, “it’s going to undermine those utilities that have been resistant to solar and said that it’s too costly for them to add,” he said.

LIPA launched the small-town distributed solar initiative in July, folding it into its feed-in tariff and offering contracts for up to 40 megawatts in non-residential solar projects, enough to power the equivalent of 5,200 homes.

Deering explained that for a year utility officials had been grappling with how to deliver more power to Long Island’s far-flung communities where electricity demand was rising and grid infrastructure constrained. They decided to try solar panels instead of spending an estimated $84 million by 2020 on new power lines and on purchasing more electricity, mainly from natural gas power plants.

The utility will target six areas on the east end of Long Island’s South Fork—a narrow stretch of scattered hamlets that includes the Hamptons and Montauk. To encourage solar installations, developers will receive a special rate for every kilowatt-hour their panels produce over 20 years—7 cents more than what LIPA will offer elsewhere on the island for other feed-in tariff projects.

Deering described it as a three-birds-with-one-stone strategy. Distributed solar would help the utility contribute to the state’s goal of getting 30 percent of electricity supplies from renewables by 2015. It would also encourage solar job creation and defer hefty capital investment in the grid, he said. LIPA expects to begin accepting applications from developers in October.

Farrell of the Institute for Local Self-Reliance called the plan “pioneering.”

“It’s certainly the first program I’ve heard of run by a utility” that offers higher incentives for distributed solar projects based on geography, he said.

While unique, LIPA’s move is in line with a shift among progressive utilities to pay more for distributed solar when it can benefit the grid.

Farrell pointed to programs by the Los Angeles Department of Water and Power and Austin Energy in Texas as leading examples. The Los Angeles utility recently rolled out a 100-megawatt feed-in tariff program for distributed solar projects, with a twist. The utility will pay developers 17 cents for every kilowatt-hour of solar electricity. But solar power produced in the middle of the day and during hot summer months—peak demand periods—will earn extra money on top of that, as much as 2.25 cents more per unit.

The Los Angeles program “completely upends” the argument that solar power is too intermittent to be reliable during peak hours, Farrell said.

In recent years, utilities in 46 states have offered some type of incentive for distributed solar like net metering or tax incentives, but the programs vary vastly in size and scope and some have dried up. For now, the country’s renewable energy mix is dominated by large-scale projects—mainly wind farms—that are owned by utilities or corporate developers.

Still, distributed solar is booming. In the last six months, the United States installed more than 1,500 megawatts of solar, and more than half of it was distributed generation, according to data released Thursday by GTM Research and the Solar Energy Industries Association. By the end of this year, distributed solar is projected to account for about 45 percent of new installations, in what is expected to be a record year for solar in the United States.

The rise is due to a mix of economic and other forces.

High electricity prices in states like California and Hawaii are driving homeowners and building owners to produce their own distributed solar power. And it’s increasingly more affordable for them to do so. The price of an installed rooftop solar system fell by as much as 14 percent in 2012 compared to the previous year, according to the Department of Energy-run Lawrence Berkeley National Laboratory.

Further, leasing programs that dramatically cut the costs of going solar are soaring in popularity. In California, about three-quarters of rooftop solar systems are owned by companies that lease panels, allowing consumers to avoid spending the tens of thousands of dollars to own the panels themselves.

Rooftop Solar a Headache for Many

Despite the market forces in favor of solar, utilities are generally not trying to encourage the growth of distributed generation and some are fighting it.

“Most U.S. utilities don’t view distributed generation as an asset—it’s seen more as a liability,” said Michael Coddington, a former utility engineer and a senior engineer at the Department of Energy-backed National Renewable Energy Laboratory in Golden, Colo.

Coddington said in many respects these utilities are right, citing the hassle of managing grid instability from a high penetration of solar power and distributed-connected buildings, which give power to the grid and take from it on cloudy days or at night. He said utilities are worried that an influx of distributed solar will negatively affect voltage, power quality and other grid conditions that allow electricity to flow smoothly and reliably.

“It just creates more work for the utilities in trying to operate their system,” he said.

Utilities in at least six states—Arizona, California, Colorado, Idaho, Louisiana and Vermont—have tried, or are trying, to scale back net-metering policies that pay homeowners for their distributed generation.

The utilities say it’s an issue of fairness. Because net metering participants send solar power to the grid, they often consume less electricity than they produce and can pay next to nothing at the end of their billing period. They don’t pay for grid maintenance, transmission and distribution or customer service fees—costs the utilities say get passed on to ratepayers who don’t have solar panels.

To address this, Xcel Energy, Colorado’s largest electricity provider, wants to reduce the net metering credits its solar users receive. An administrative law judge is set to hold a hearing on the plan this month. Arizona’s main utility, Arizona Public Service Co., wants new residential solar users to pay every time they draw energy from the grid. A bill in the California legislature, which is backed by the utility sector, would charge rooftop solar customers fees of up to $120 per year.

Can’t ‘Put Our Heads in the Sand’

Despite the hurdles, the amount of U.S. distributed solar is only expected to grow, according to both proponents and critics, as rooftop solar become increasingly affordable and concerns intensify about climate change.

In its report on the financial risks to utilities of locally produced power, the Edison Electric Institute said, “Participants in all industries must prepare for and develop plans to address disruptive threats, including plans to replace their own technology” with alternatives. “Ultimately, all stakeholders must embrace change in technology and business models in order to maintain a viable utility industry,” the report added.

The report pointed to telecommunications providers AT&T and Verizon that have had to transition from landline telephone services to wireless to stay competitive.

Kimberly Harriman, an administrative law judge in the New York State Department of Public Service, which regulates New York’s utilities, said the inevitability of distributed generation is why more utilities should be following LIPA’s lead in figuring out how to use the technology to their economic advantage. How best to force or encourage utilities to invest in distributed solar, however, is still an open question, she said, one that could require changes to utility regulations and energy policies and would likely spark lengthy debates.

Still, “I don’t think we’re at a stage where we can do nothing and put our heads in the sand,” Harriman said.

In the meantime, some investor-owned companies have already figured if they can’t beat the distributed solar sector, they’re better off joining it.

“It’s a growing market, and it’s something that we’re interested in,” Tom Williams, a spokesman for Duke Energy in Charlotte, N.C., said about rooftop solar. He noted that the utility giant had spent $50 million in recent years to build 10 megawatts’ worth of distributed solar across North Carolina, mostly on industrial buildings.

“It’s what many customers are flocking to, because the prices have come down,” he said. “We’d like to play a role in that.” 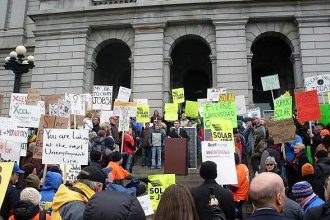 Boulder Likely to Pursue Its Own Green Utility 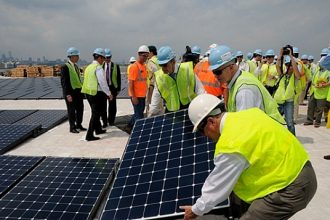