Dave Archambault II led the Standing Rock Sioux Tribe through an emotional year and a half as the tribe and its supporters nearly stopped the Dakota Access Pipeline (DAPL). Almost a year ago, they were celebrating after persuading President Barack Obama to effectively shelve the construction plan. Yet, today, the pipeline carries crude oil beneath the Missouri River, just upstream from the Standing Rock reservation.

For a while, it looked like Standing Rock would achieve the impossible. The tribe’s opposition drew thousands to what was arguably the largest demonstration of tribal sovereignty and call for environmental justice in history as Archambault, the tribal chairman, pleaded his case before members of Congress and the United Nations. In early December, the Obama administration called for a more thorough environmental review that would take years to complete.

The review was never carried out. President Donald Trump signed an executive order calling for work on the pipeline to be expedited soon after his January inauguration. Archambault was vilified by members of his tribe who suffered economic fallout from the protests on a reservation already plagued by poverty. When the chairman urged the protesters to go home, they accused Archambault of selling out.

In September, Archambault lost his bid for re-election to an opponent who said it was time to move on.

In his first in-depth interview since his election loss, Archambault spoke candidly with InsideClimate News about his time as chairman of the Standing Rock Tribe, the NoDAPL movement, and what comes next for tribal sovereignty, environmental justice and for him personally.

This interview was edited for length and clarity.

InsideClimate News: What has this past year and a half, since the NoDAPL movement began, been like for you?

Archambault: The highlight was when our tribal communities came together and showed support. That was where I saw for the first time tribes across this nation, from around the world, come to Standing Rock and stand together.

We could never anticipate what was going to happen, but it was about time that the federal government finally listened to indigenous people. After all these centuries, it felt like they heard us and they put a temporary stop [to the pipeline].

ICN: You’ve described those early days at the camp as being like a dream?

Archambault: There were things that were happening, people were healing and their discussion was shifting to forgiveness. There was generosity, there were a lot of the virtues and values that our ancestors passed down to us that were actually presenting themselves and letting us experience what it truly means to be living with these values. It was special. It was a place where you always wanted to be. You didn’t want to leave.

ICN: Did you ever think the NoDAPL movement would get as far as it did?

It had to happen because the country continues to infringe on our rights and our lands, so making a stand was going to happen and it’s still going because we still have a lot of these threats coming.

ICN: What was the low point for you?

Archambault: When I started to get blamed for everything that was happening. Trump came in, the pipeline was still going under the river, there was information disseminated through Facebook about me, about how I was selling out, which was far from the truth. I never changed who I was from the very beginning.

Whenever anybody is in a position like this and something great is happening, the people want to elevate them. They elevate individuals almost like stars. When that happens, it’s easy to love somebody who is a star, but in a split second, it’s easy to hate that person.

I never wanted to be anybody in this whole thing, because it’s really a slippery slope when that hate comes on.  When things like that happen, if I’m the cause of continued division, the best thing then is for me not to be in that position. I’m thankful that the membership of Standing Rock gave me the opportunity to be their chairman and that they gave me the opportunity to run again. But I think things happen the way they are supposed to happen, so that we can continue to move forward and advance, not just Standing Rock but all of Indian Country. I’m in a good place, and I think it’s the way it’s supposed to be. There is a lot less weight on my shoulders now that I am not the chairman, and I can feel it, I’m a lot lighter.

ICN: Tell me more about that weight.

Archambault: The chief of police came in [after the election] and asked ‘who will be the next liaison for us because I have some news.’ He said, ‘well, I just want you to know we had close to a hundred 960s in a school this last week.” A 960 is a form that is filled out when there is suspicion of neglect or abuse of children.

My initial reaction was, we’ve got to do something about this right now, and I was not in the position to do that. It now is the responsibility of the new chairman. That was the first time that I realized that, man that’s a tough job to carry. To know that they’re out there, and to know that we don’t have the adequate resources to address all the 960s, and then to carry that, people don’t realize what a chairman has to go through until they are actually in that position.

ICN: What role did the NoDAPL fight play in your election loss?

Archambault: I think it was just our membership was ready for new leadership. It could have been a lot of things that came into play. We are in a state of dependency, we have a high poverty rate, a high unemployment rate, we have all of the abuses, and when you are in that state, the interest to try to get immediate gratification is there. It’s very hard to be looking out into the future. So, all the things that I’ve done, the way I base my decisions and the way I can sleep at night, is I had to say ‘no’ a lot to our membership, and I had to say ‘yes’ when I knew that the impact was going to be good for our future, so looking out further than today, or tomorrow, or next year. It’s really hard to do that, but that is the reason why I ran in the first place, because I wanted to try to bump this tribe in a new direction, and I believe I did that.

ICN: What toll did the demonstrations and road closures have on Standing Rock financially?

Archambault: We were generating $14 million a year with our casino. Now, we will be lucky if we make $4 million; a $10 million drop. That is going to have a significant impact on the budget in the future, and it’s going to be tough. Was it good for Standing Rock? Was it good for Indian Country? Was it good for indigenous peoples around the world?

ICN: What was the significance of the DAPL fight in terms of native sovereignty and environmental justice?

Archambault: It was of huge significance, especially for environmental justice, because when you look at these infrastructure projects, you have to take a look at the route, and when you look at the route, it follows the highest areas of poverty, and in this nation, the highest areas of poverty are Indian Country. The 10 poorest counties of this nation, over half of them are tribal nations. What tribes are doing is saying, we have value, we have worth, we’re still here, and that is exercising your sovereignty.

ICN: What’s the next big fight in Native American sovereignty, and is there still an appetite from tribes for this kind of sustained protest?

ICN: What are your plans now? 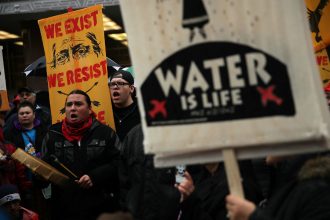