The embattled Keystone XL oil pipeline faces yet another delay after a federal judge ordered the Trump administration to conduct a new environmental review of the project.

U.S. District Judge Brian Morris of Montana issued a sharp rebuke to the federal government, which had argued it need not produce an extensive new environmental impact statement for the pipeline after regulators in Nebraska ordered its builder to follow a new route.

In his ruling Wednesday, Morris said the alternative route would cross five different counties and different water bodies, would be longer than the original path, and would require an additional pump station with supporting power line infrastructure. As a result, he wrote, federal agencies “cannot escape their responsibility” to evaluate the alternative under the National Environmental Policy Act (NEPA).

The decision is likely to further delay the project and casts another layer of uncertainty over when, or whether, it will be completed. Unless a new review is completed in less than a year, it would not be possible to start construction in time for the 2019 building season.

The pipeline, first proposed by TransCanada Corp. a decade ago, is intended to carry tar sands oil from Alberta toward refineries on the Gulf Coast. Its southern leg has been completed, but its northern section has been stymied by fierce resistance from landowners, Native Americans and environmental groups.

After detailed and hotly contested environmental impact statements overseen by the State Department, former President Barack Obama decided that it was not in the national interest to issue a permit, a requirement for international pipelines.

Interventions since then by Congress and President Donald Trump to approve the permit and fast track the project have not managed to speed it up.

“This is a huge step to once again shut down this zombie pipeline that threatens water, our homelands, and our treaty territory,” said Joye Braun, an organizer with the Indigenous Environmental Network, one of the plaintiffs who sought a new environmental impact statement. “No route is acceptable for Keystone XL, and I believe a full environmental review of this alternative route will highlight the extraordinary risks this pipeline poses to us all.”

TransCanada did not immediately return a request for comment. The U.S. State Department, the lead federal agency, issued a statement saying it was reviewing the judge’s order.

Last November, when Nebraska’s Public Service Commission approved the pipeline project, it rejected TransCanada’s preferred route and ordered it to use an alternative route instead.

The federal government did conduct a less-thorough review known as an environmental assessment. In its draft of that assessment, released for public comment in late July, it said the pipeline would have “minor to moderate” effects on water and wildlife.

But in his ruling, Morris said the federal government is obligated under NEPA to produce a full environmental impact statement for the alternative route. The Endangered Species Act also “requires agencies to evaluate which species or critical habitats are present in the ‘action area’,” he wrote, “which includes ‘all areas to be affected directly or indirectly by the Federal action’.” He wrote that the court would consider the government’s obligations under the Endangered Species Act in a future order.

Trump, GOP Have Been Trying to Rewrite NEPA

Allies of the fossil fuel industries have long viewed both NEPA and the Endangered Species Act as impediments to energy development, and the Trump administration and Republicans in Congress have begun efforts to overhaul both laws.

Anthony Swift, director of the Canada project at the Natural Resources Defense Council, said the case and the ongoing debate over the pipeline highlight the importance of NEPA.

“This is the reason why we have NEPA, which is to ensure that we don’t build dangerous projects through resources that we can’t afford to have contaminated,” he said.

Swift said that many of the delays so far are a result of efforts by TransCanada or the Trump administration to speed along the project and ignore the government’s responsibilities under NEPA.

That law requires the government to examine not only direct environmental impact of spills and construction, but also the greenhouse gas implications of the pipeline, which would carry crude oil from Canada’s tar sands, the most carbon-intensive source of oil.

Canada’s development of its tar sands resources has recently been constrained by a lack of pipeline capacity. In order to meet the goals of the Paris climate agreement, the world will need to rapidly reduce oil consumption, and environmentalists have argued that the tar sands are an obvious choice to abandon first.

“It’s quite clear we need to be reducing the carbon intensity of the fuels we use,” Swift said. “At its heart, Keystone XL is about expanding the production of some of the dirtiest oil in the world.” 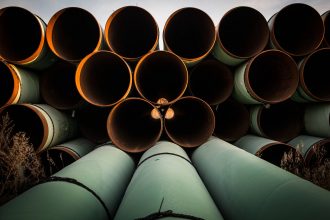