Hurricane Irma knocked millions of dollars worth of oranges and grapefruits to the ground. Its high winds mowed down thousands of acres of sugarcane, toppled nursery plants, and decimated the avocado crop.

The damage will cost the state’s agricultural industry billions, but for the migrant workers who pick these crops and work in the fields, the storm means real hardship that will test lives already on the edge.

“If you listen to the news coverage about Irma, you’ll hear about damage to the farms. You don’t ever hear about impact to farm workers,” said Jeannie Economos, the pesticide safety and environmental health project coordinator with the Farmworker Association of Florida. “And there’s a critical piece—an intersection of climate change and living and working conditions for migrant workers.”

The storm destroyed housing across communities that are home to many of the estimated 300,000 migrant workers in the state. Now, the damage to Florida’s agriculture industry will mean fewer jobs, and because of their legal status or lack of a permanent address, many migrant workers don’t qualify for relief—or are afraid to seek help. For people already living on the margins, missing even a week or two of work can mean being unable to pay rent, buy groceries or fill up a car with gas.

“There’s not going to be a lot of work this year,” said Gene McAvoy, a horticultural specialist with the University of Florida. “They don’t have credit cards. They don’t have bank accounts. The housing they live in is substandard. They took a disproportionate hit by the storm. It’s really going to have a major impact on that community.”

Florida is the country’s second-largest producer of vegetables and top citrus producer, and its $8 billion agricultural economy depends on migrant workers. Unlike other parts of the country, where the agricultural economy is supported by mechanization, almost all of the crops grown in Florida, from asparagus to zucchini, require a human to pick them. Many are migrant workers—some in the country legally, and some not—who are especially vulnerable to the danger and economic hardship that accompany a monster storm like Irma.

“If you’re not picking, you’re not getting paid—you won’t have any income,” said Kathy Dain director of the Beth-El Farmworker Ministry in Wimauma. “For those who live in poverty—which would be our farmworkers—you don’t have the resources. A middle-income person can just go out and buy the things they need.”

Between a Storm and a Hostile Political Climate

In the hours before Irma hit, some farm workers spent their limited cash taking shelter in motels. Some spent money on gas to leave the state. Still others wouldn’t seek shelter, fearing that operators or law enforcement would ask for papers.

“I saw, first hand, families that didn’t want to go to shelters,” said Lourdes Villanueva, the director of farmworker advocacy at the Redlands Christian Migrant Association. “It took a lot of convincing.”

With anti-immigrant rhetoric simmering across the country—inflamed by talk of border walls and immigration-tightening legislation floated by lawmakers—fear is running high.

“It’s always a difficult life, but in this political climate, it’s harder,” Villanueva added. “If these people could be invisible, they would be.”

Some farm workers waited out Irma at home, losing the roofs over their heads and all the food in their refrigerators.

“That sets a poor family back much more than it does a family who has an employer 52 weeks a year,” said Steve Kirk, president of a not-for-profit called Rural Neighborhoods that rents 1,700 apartments, many to farmworkers. “From a financial perspective, they have a hard time rebounding, especially when they lose weeks of work.”

The Farmworker Association of Florida estimates that the state has 300,000 farmworkers in total, roughly half of whom are undocumented. “FEMA and food stamps and other emergency help — they’re not going to qualify,” said Tirso Moreno, a director with the association.

After Irma, Aid Was Slow to Arrive

Irma’s impact, at least initially, was especially severe in Immokalee, a chronically poor town at the heart of Florida’s tomato-growing industry in the southwestern part of the state.

About 30 miles east the expensive high-rise apartment buildings of Naples that tower at the edge of the Gulf, Immokalee was in near ruin. Irma’s winds ripped roofs off mobile homes like sardine cans. Houses were inundated with water that people tried to pump out with hand-made devices fashioned out of bits of hose. Thousands of acres of plastic sheeting—laid down to prepare for the tomato crop—sat under mud.

Government and other aid workers were slow to arrive with basic supplies, and it took nearly two weeks for power to return—providing, finally, some relief from the south Florida heat.

“The Red Cross didn’t show up for a week. If you needed water or ice, you needed it right away, not 10 days later,” Villanueva said. “The help went to Naples, to other places. No one bothered to go to that area.”

Nor to other, lesser-known farming communities across the state.

“This storm was so big, they weren’t prepared,” Moreno said. “The southwest was the most affected, but there were problems all over.”

In a state with a shortage of affordable housing, landlords can charge huge rents for mobile homes, and many of those are unanchored or so old they don’t meet newer safety standards. The housing stock in Immokalee was already limited and shoddy, even before Irma wiped out as many as 100 mobile and traditional homes.

The problem extends through much of Florida’s agricultural areas, especially in the central and southern parts of the state—away from the tourism and the wealth of the coasts.

“The real issue is the lack of affordable housing for everyone, but that’s magnified by what these families go through. They’re not here year-round. They can’t secure a year-round lease, so they’re not ideal candidates for landlords,” Villanueva said. “There are just so many factors that are really stacked against these families.”

The good news for Immokalee and other produce-growing areas is that most of the crop wasn’t yet in the ground and there’s still time to plant for the winter growing season. That means there will be field jobs, albeit on a delayed schedule.

The picture is different with the state’s citrus crop, which in some areas was almost completely destroyed. That comes after a decade battling a vexing tree disease called citrus greening, which has driven down citrus yields in the state.

“As an industry, it looked like we turned a corner. Then Irma came,” said Fritz Roka an associate professor of agricultural economics with the University of Florida. “Clearly there’s not going to be work for them to do, certainly in citrus.”

Like so many harvesting jobs, picking citrus well requires specialization and experience. Increasingly, those workers have come from Mexico under the H2A guest worker program. In 2010, there were about 4,500 H2A workers approved in Florida. Last year, that number was nearly 23,000. As many as 80 percent of them work in the state’s citrus orchards, Roka said.

Because orchard owners apply for those workers ahead of time and base their numbers on their estimated work needs, they’re likely to apply for a significantly lower workforce this year. That will help their balance sheets.

But workers, both in the U.S. and Mexico, will feel it.

“It makes putting food on the table a lot more challenging,” said Bryan Moorefield, a Ph.D. candidate at Brown University who studies social impacts on migrant farmworkers and lives part of the year in a community in central Mexico where many H2A workers live. “You’re dealing with communities that often don’t have access to labor markets. Maybe tomatoes will be able to bounce back, but missing a month or two of work might mean not paying for housing.”

For those who get jobs in Florida’s citrus industry, working conditions this year will be unusually tough.

“Most citrus workers tell me: Citrus is the hardest job I’ve had in agriculture, but I also want as many hours as I can get,” Moorefield added. “If there’s less fruit on the tree and it’s smaller, they’ll have to work quicker to make up the volume.”

Economos, meanwhile, believes that increasingly volatile weather could mean that employers lean on the H2A guest program even more in coming years.

“With climate change and the impact of storms, it’s even further incentive to hire guest workers, because if their farms are damaged, they don’t have to bring workers here,” she said. “If there’s going to be increased storms or weather events, and if they’re going to affect the crops, then what’s that going to do to documented, undocumented and guest workers in Florida and the United States? It’s going to shift the dynamic. That’s a really big discussion that needs to be had.”

If employers don’t hire guest workers, that could push them to come illegally.

Climate Change Impacts the Poor the Most

“The climate situation has been very bad for our workers,” said Baldemar Velasquez, president of the Ohio-based Farm Labor Organizing Committee. “It’s not just hurricanes. The weather patterns bringing rain into North and South Carolina. We see it every day. They can’t send money home. They’re worried about their families.”

This year’s hurricane season has pummeled farmers all along the Gulf coast and throughout the Caribbean.

As ocean waters get warmer, stoking more frequent and intense storms, poor migrant workers will remain the least equipped to prepare for hurricanes and the least able to get out of their way. In Florida—flat, hot and flanked by the hurricane-fueling waters of the Atlantic and Gulf of Mexico — the challenges facing migrant farmworkers will be uniquely amplified.

More than a month after Irma ripped through Immokalee, U.S. Secretary of Housing and Urban Development Ben Carson was scheduled to visit the town. That Carson—who continues to defend a statement he made in May that poverty is a “state of mind”—is visiting the ravaged community will come as small consolation.

That it took so long won’t surprise anyone, either. 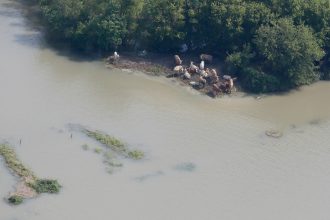