New warnings of a global warming-driven increase in the most deadly and destructive tropical storms are especially scary in regions already hit hard, including the Southeastern U.S., where Hurricane Michael damaged 60,000 homes in 2018, and the Caribbean, where Hurricane Maria killed nearly 3,000 people in Puerto Rico and crippled the island’s infrastructure.

There’s more of the same ahead, recent federal research suggests. One study found that the chances of major tropical storms forming increased globally by 6 percent in each of the last four decades. A second shows the biggest increase in frequency in already storm-battered areas, including Florida, the Bahamas, eastern Africa, Japan, China and the Philippine Islands.

The results bolster “projections of increased (tropical cyclone) intensity under continued warming,” the authors of the first study wrote. Those researchers focused on storms with winds greater than 115 mph (category 3 or above), because those cause the most damage.

The findings landed as residents are warily watching Tropical Storm Arthur spin toward the Carolina coast well ahead of the official start of the hurricane season, and with projections for above-average hurricane activity in the Atlantic this summer.

In the Bay of Bengal, Tropical Cyclone Amphan is projected to drive a deadly surge of flooding toward Bangladesh this week, with winds of more than 170 mph. Emergency responders are struggling to evacuate up to a million people, and provide them with emergency shelter during the global coronavirus pandemic, which requires evacuees maintain physical distancing to prevent the spread of the disease.

New tropical storm data from 2010 to 2017 showed that “the probability of a hurricane having wind speeds of at least 100 knots increased by approximately 15 percent between the early and latter halves of the 39-year record.”

“This shows us there is a global trend of more stronger hurricanes,” Kossin said. “It’s consistent with our expectations, based on physics.” Warmer oceans supply more energy for storms and the warmer atmosphere holds more moisture. Several recent studies show how those combine to cause more damage worldwide, and pin down the role of global warming.

Increasingly, such projections help city planners and coastal developers consider if they should abandon some areas, build seawalls or floodgates, or discourage development on the most vulnerable beaches and bluffs in the next few decades.

Tropical storm frequency has increased in the warm waters of the Atlantic hurricane belt, where dangerous storms often spin toward the Southeastern U.S. and the Caribbean, while decreasing in the southern Indian Ocean and Western North Pacific, according to the second study.

Hiroyuki Murakami, a climate scientist with the NOAA’s Geophysical Fluid Dynamics Laboratory, led that research, which was published May 4 in PNAS. Murakami said the average annual number of tropical storms globally had held steady at 86 since 1980. The frequency increased in hotspots like the Arabian Peninsula and East Africa, Southeast Asia, around the Hawaiian Islands and especially in the eastern Atlantic.

Overall, the global number of tropical cyclones is projected to decline by 2100, but those that do form will be more severe because rising sea surface temperatures fuel the intensity and destructiveness of tropical storms, and rising sea levels worsen storm-driven flooding as the sea surges over low-lying areas.

Only in the last 10 years have scientists been able to start detecting global warming’s fingerprint on tropical storms, Murakami said.

The trend toward more intense tropical storms plays out in different ways, said Kevin Trenberth, a climate scientist with the National Center for Atmospheric Research who noted that some storms, like Harvey and Florence, are more long-lived. “In earlier years they would likely have petered out because of insufficient heat in the ocean,” Trenberth said.

Hurricane Irma, which hit the Caribbean and Florida in 2017, killing 134 people and causing $50 billion in damage, might be the best example of how warming oceans fuel storms that last longer and get bigger. Irma went through several cycles of weakening and strengthening, and reached Category 5 strength twice.

“In many cases in the past, such storms don’t recover,” he said.  “But there was enough warm water around for Irma to spin up again, and then again, and again. It was unprecedented, and it was big enough to straddle Florida.”

Despite the recent advances in climate science related to hurricanes, it’s still hard to calculate the change in risk for individual locations, said Maarten van Aalst, director of the Climate Centre, a Netherlands-based nonprofit that helps the International Federation of Red Cross and Red Crescent Societies tackle the impact of extreme weather on vulnerable populations.

The difficulties in calculating risk presents a huge challenge for emergency responders, who have faced a surge in calls for help after intensifying storms in recent years, van Aalst said. Predicting shifts in the range of strong storms is “critical for humanitarians, because some areas historically out of hurricane zones have no early warning systems and preparedness, and might now be hit,” he said.

“While we have made good progress over the past years, there is still a lot of room for improvement in how we handle these storms, even without the increases due to climate change,” he added.

Global warming is likely to spawn record-breaking tropical storms in nearly every region, scientists warned in 2018, just a few months after cyclones Idai and Kenneth roared through as the deadliest and strongest storms on record in Mozambique.

Jamie LeSueur, the Red Cross’s roving operations manager, was on the ground when those storms hit the East African nation in March and April of 2019. He was implementing a forecast-based financing plan that releases emergency funds in advance of typhoons, heat waves or floods based on their anticipated impacts.

Some supplies were already in place, and training of local crews in progress when Idai hit, but LeSueur said the scale of destruction was beyond what they expected.

This week Tropical Cyclone Amphan, heading for Bangladesh across an overheated Bay of Bengal, will likely force refugees into close quarters, LeSueur said, magnifying the global coronavirus pandemic at the regional level.

Last month, in the Pacific, thousands already faced that twin threat of extreme weather and the pandemic, when Tropical Cyclone Harold raked Vanuatu, a the South Pacific island about 1,500 miles east of Australia, with wind speeds up to 170 mph and a storm surge of up to 2.6 feet. The country had to lift its emergency social distancing measures to evacuate and shelter residents, and humanitarian aid efforts from outside were slowed by travel restrictions, according to a NASA Earth Observatory bulletin.

“For us, this was the first confrontation with the dual impact of Covid and climate,” LeSueur said. “We had to rapidly adjust our plans for evacuation in Vanuatu in light of social distancing.” The IFRC is now updating its response plans globally, including those for other climate-linked disasters like the plague of locusts in East Africa.

“It’s very clear that the people that are hit hardest are facing multiple risks at once,” he said. 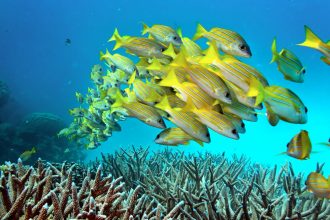 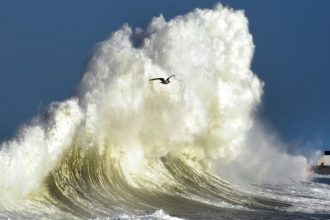 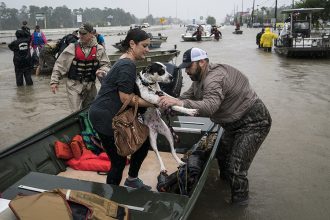