Cynthia Walter, an ecologist at St. Vincent College outside Pittsburgh, gets a lot of emails from local wildlife enthusiasts asking about “this bird” or “that amphibian.”

But one day last year she got an uncommon request to inspect the forest cover around the Beaver Run Reservoir via Google Earth. The 1,300-acre lake is the main source of drinking water for 80,000 residents in southwestern Pennsylvania. It also rests atop the enormous Marcellus Shale gas reserve.

“Are those natural gas wells on the peninsulas?” she recalls the email sender asking.

Immediately, Walter spotted a square of barren earth on the satellite map. Later she learned that a company called CNX Gas had drilled more than a dozen wells on that bald patch from two sprawling well pads, using a controversial technique known as horizontal hydraulic fracturing, or hydrofracking, to release gas trapped in layers of shale rock deep underground.

“I was kind of shocked. I’ve been on Beaver Run for 27 years and had no idea,” Walter said. Nor was she aware that over the past decade or so about 100 shallow natural gas wells had been drilled throughout the reservoir.

But the gas operations were hardly a secret. Besides being visible by air, records obtained by InsideClimate News in response to requests reveal that the Municipal Authority of Westmoreland County, the local water utility, had leased the watershed in 1999 precisely to cash in on drilling opportunities.

The agency gets a 12.5 percent payment rate on the gas produced by wells on the reservoir. Utility officials say leasing Beaver Run allows it to raise money for infrastructure upgrades without increasing customer rates.

Despite the money that drillers are dangling, documents and interviews show that Westmoreland County appears to be the only local water authority in the state to have leased acreage to drillers.

Many others are being courted, though. And before they follow Westomoreland County’s lead, local advocates want regulations to bar drilling in watersheds that provide a primary drinking water source.

Neighboring New York State, which has yet to tap the Marcellus Shale, recently proposed such rules to ban hydrofracking in watersheds and aquifers that supply drinking water. But in Pennsylvania an all-out prohibition will likely meet resistance from some policymakers and the gas industry.

The state, nicknamed the Saudi Arabia of natural gas, has more than 2,000 gas wells, with 60,000 expected in the year 2030, which would eat up at least 90,000 acres and transform the state’s southern landscape while also bringing wealth to budget-strapped localities.

Fracking began at Beaver Run in 2008 — one year, incidentally, after the municipal authority upheld a fishing ban in the reservoir due to public health concerns.

CNX says it has plans for up to 30 shale gas wells at the reservoir from five different drilling sites. Both CNX and the water authority have groundwater monitoring wells around the reservoir. As an extra precaution, CNX is drilling five well casings instead of the state-mandated two.

So far, the company has a good record at the site, without any violations from state regulators.

Still, many residents like Walter wonder how drilling was permitted in a reservoir watershed where virtually all other activities are banned. Others are angry they weren’t informed about the gas development and feel excluded from a public decision.

When Joe Evans, a medical engineer and member of Citizens for the Preservation of Rural Murrysville, saw aerial maps of the reservoir in 2009, he was stunned.

“I was shocked that a process that I was finding to be dangerous was allowed to take place on a reservoir property, where even hiking and fishing from the banks is prohibited for fear of pollution,” he said.

Brien Palmer, a business technology consultant and fellow member of the citizens group, said he’s not opposed to gas drilling but questions the judgment of the water utility. “The fact that they would drill near a drinking water source first, and not as a last resort, is astonishing,” he said. “I’m just not sure what I can say to someone who can’t see the absurdity of fracking in a drinking well basin.”

Daniel Jonczak, an electrical engineer who lives two miles from the Beaver Run Reservoir, says that he, too, is a far cry from an anti-drilling activist. He grew up in the 1970s, when Westmoreland County’s streams flowed orange from acid mine drainage. So extreme was the damage, Jonczak laments, that local creeks were given names like coal tar run. Gas was always seen as less polluting.

Yet the decision to lease Beaver Run Reservoir has him extremely worried.

Officials from the Municipal Authority of Westmoreland County — which is operated by the Pittsburgh-based consulting firm ResourceDevelopment & Management — did not respond to repeated requests for comment. (Unrelated to gas drilling, the water utility is being sued by Cross Connection Control Management for allegedly failing to keep customer drinking water and sewage pipelines separate, which would be a violation of the federal Safe Drinking Water Act.)

Lynn Seay, a spokeswoman for CNX and its parent company CONSOL Energy, told InsideClimate News in an email: “We have several measures in place to ensure that all is safe and compliant at our Beaver Run operation, consistent with CONSOL’s core values.” Seay added that a team of faculty and geology students from Indiana University of Pennsylvania will be preforming independent water quality testing several times a year.

Hydrofracking involves injecting huge amounts of water, sand and chemicals at high pressures to open up cracks in rock formations and unleash the gas that lies thousands of feet below. One well can produce over a million gallons of wastewater laced with corrosive salts and carcinogenic and radioactive materials.

Residents in Pennsylvania, Colorado, Ohio, Texas and West Virginia have blamed natural gas drilling for seeping fluids into their underground drinking water supplies, while the industry maintains the practice is safe.

Walter, the ecologist, said she’s concerned about the copious amounts of drilling waste being trucked into the watershed and stored in a multi-million gallon wastewater pit. “These frack pits store an unusually high concentration of toxins, and they sit uphill from the reservoir,” she said.

She fears the pit “could be overwhelmed by severe storms, like the tornadoes we got [in April].” That the wells are located 1,000 feet from the reservoir’s edge only compounds her worries.

Jan Jarrett, president of the environmental group Citizens for Pennsylvania’s Future (PennFuture), said the distance is “something worth monitoring and perhaps extending.” But with advances in drinking water treatment systems, she said: “Water authorities don’t necessarily need water to be coming in absolutely pure from the watersheds, in terms of sedimentation run-off.”

Drinking water from the Beaver Run Reservoir is always tested and treated before it’s sent to customers. The risks there, experts say, are not comparable to the more dangerous prospects of drilling in New York City’s watershed in the Catskill Mountains, where the water flows to urban customers untreated.

Though Westmoreland authority appears to be the only Pennsylvania water utility to have leased its watershed, others are being wooed en masse by gas companies with mixed results, according to John Brosious of the Pennsylvania Municipal Authorities Association.

“Some have been dismissive; they don’t want any drilling in their watershed. A lot are concerned about any impact on their greater watersheds, particularly if they’re downstream or down aquifer of drilling. And some are more open,” he said.

Then there are water agencies that don’t own their own mineral rights, like the Brockway Municipal Authority, where private owners have control. The small town in northcentral Pennsylvania unsuccessfully sought an injunction to prevent drilling in its watershed after the mineral rights were leased to a company called Flatirons Development.

Because the State Supreme Court ruled in 2008 that surface owners must reasonably accommodate mineral development, Brockway had to allow drilling in its watershed.

Brockway has two reservoirs — one of which is fed by an artisan aquifer. It also manages the watershed forests for sustainable timber harvest. So far, one well has been drilled about 600 feet from the reservoir but has not yet been hydraulically fractured.

During a recent inspection, the Pennsylvania Department of Environmental Protection (DEP) found methane leaking through the gas well and asked Flatirons to correct the problem before proceeding.

The company was also cited with erosion violations.

“They made a real mess with their impoundment pits,” said Bob Ging, a veteran environmental attorney and former state assistant attorney general at DEP, who represented Brockway and negotiated a descent degree on the town’s behalf. The directive requires Flatirons to provide replacement drinking water within 24 hours in the event of any contamination.

Ging, who was fired in the early 1980s from DEP for what he alleges was his attempt to prosecute a case against a coal company, is calling for state legislation that would give water agencies the ability to bar drilling in watersheds that are the primary source of drinking water for local communities.

Michael Krancer, the current DEP secretary, recently proposed rule changes that, among other things, would restrict gas drilling to within 1,000 feet of a public water supply. That’s something supported by Pennsylvania American Water, a water and wastewater company that serves 370 Pennsylvania communities and 2 million people, said firm spokesperson Terry Maenza.

Maenza said that Pennsylvania American Water had at one point thought about leasing its properties for gas drilling, but then shelved the idea. Today, the water company supports “setback requirements, prohibition of drilling under reservoirs and mandated emergency response and contingency plans in place before drilling occurs,” as well as water source replacement plans.

Without giving specifics, Maenza said that Pennsylvania American Water doesn’t own the mineral rights to some of its watersheds.

In a situation somewhat similar to Brockway, two of Pennsylvania American Water’s reservoirs in northeast Pennsylvania were surrounded by land already leased for gas drilling. However, the experimental wells drilled there ended up yielding little gas and have since been plugged.

John Hanger, a former DEP secretary and founding president of PennFuture, said he can understand some of the concerns echoed by Westmoreland County residents and others. “But I would tell them that their concerns have not come to fruition, and that’s a testament to the DEP’s strong regulatory record.”

Moving forward, he said, it might be worth extending the 1,000-foot buffer zone from a drinking water reservoirs, even if it isn’t clear “what the magic number should be.” 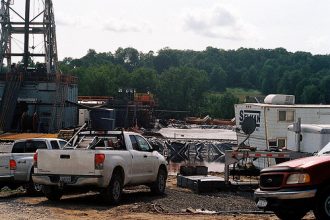