The Democratic presidential front-runner, Joe Biden, proposed an unusual nugget of farm-centric climate policy this week: “Soil is the next frontier for storing carbon.”

It popped up during a swing through Iowa, where the Biden campaign became the latest in the crowded Democratic contest to release a policy proposal aimed at reinvigorating rural America.

Biden’s rural agenda includes one of the more ambitious climate-related goals for American farmers of any contender for the Democratic nomination. It promises to “ensure our agricultural sector is the first in the world to achieve net-zero emissions, and that our farmers earn income as we meet this milestone.”

To reach this target, Biden’s proposal leans heavily on the idea of paying farmers to store carbon in the soil. It’s an approach that has struggled to gain traction in the past, and critics question how Biden’s strategy would achieve net-zero emissions when it appears to rely just on voluntary efforts to sequester carbon, rather than reducing overall emissions.

Other candidates—including Sens. Elizabeth Warren and Bernie Sanders—have also outlined rural policy platforms in pitches to farm constituencies that have watched as rural issues have fallen off the political radar and as rural economies falter.

Sen. Michael Bennet, like Biden, writes about voluntary markets to support better soil carbon practices is his campaign platform. South Bend, Indiana, Mayor Pete Buttigieg talked at the first debate about climate change and farming’s role, and how “the right kind of soil management and other kind of investments, rural America could be a huge part of how we get this done.”

“It could be a lesson from the last election cycle where we saw many of these Obama counties pivot” toward Donald Trump and the Republicans, said Adam Mason, state policy director for  Iowa Citizens for Community Improvement, a farm and conservation advocacy group. “Rural areas feel abandoned and unheard by elected officials, especially Democrats. The pivot to Trump was a warning sign that they have to address rural communities.”

Warren’s platform is mostly aimed at antitrust enforcement and breaking up the mega-mergers of agricultural corporations. Sanders also addresses consolidation in agriculture—which has a profound climate impact—and points out that agricultural soils offer a huge and underutilized opportunity to store carbon.

In his proposal, Biden said he would dramatically expand a popular program run by the U.S. Department of Agriculture called the Conservation Stewardship Program (CSP). The CSP pays farmers to implement conservation methods on their land, but often ends up short of money. The Trump administration called for eliminating it in its 2020 budget proposal.

Biden’s proposal would seek “full federal funding” for the program and “ensure the program can participate in carbon markets. Corporations, individuals, and foundations interested in promoting greenhouse gas reductions could offset emissions by contributing to Conservation Stewardship Program payments to farmers for those sequestering carbon—for example, through cover crops. This will not only help combat climate change, which Vice President Biden has called an existential threat, but also create additional revenue sources for farmers at a time when many are struggling to make ends meet.”

The fact that climate change and agriculture are becoming a campaign topic at all is heartening to farm and conservation groups. But it’s unclear how the program would function, and it appears to rely on voluntary participation.

“We know voluntary doesn’t work,” Mason said. “The top line of the Biden plan sounds good, but the devil is going to be in the details.”

Researchers and even the United Nations, in a landmark report last year, have said that storing carbon in the soil through climate-friendly farming practices offers the most effective and expedient approach to controlling greenhouse gas emissions. But achieving net-zero emissions in American agriculture will likely require an all-out effort across the industry.

“It doesn’t say anything about the major sources of emissions, which we know are factory farms and synthetic nitrogen fertilizer,” said Ben Lilliston of the Minnesota-based Institute for Agriculture and Trade Policy, referring to the Biden proposal. “Voluntary environmental programs can get you so far, but at some point you need to address the sources of pollution, and you don’t see that with this proposal.”

The proposal also calls for boosting support for ethanol and next-generation biofuels. If that translates to more support for corn-based ethanol, critics say, it could counter any carbon benefits.

“You can’t say you want to move more land to conservation at the same time you’re propping up programs that promote biofuels and overproduction,” Mason said.

Paying farmers to store carbon emerged as a national issue with the introduction, and ultimate collapse, of a climate bill known as Waxman-Markey that passed the House in 2009 but died in the Senate. The bill aimed to put an economywide cap-and-trade system into place to reduce greenhouse gas emissions.

Ultimately, the powerful farm lobby worked with the oil industry to help kill the legislation, even after farm-state lawmakers ensured that farmers would not have to limit their emissions, but could participate in carbon markets and earn money by selling credits to polluters. At the time, the Environmental Protection Agency estimated that farmers could generate $20 billion a year through a cap-and-trade system by 2050.

Since then, a handful of private companies have paid farmers for polluter credits, but the concept hasn’t taken off.

“It’s a cautionary tale,” Lilliston said. “Without a government policy to increase the price of carbon credits, it’s going to be hard for a private system to bring significant payments to farmers.” 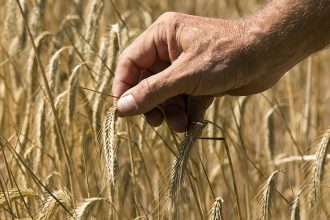