WASHINGTON—TransCanada and the U.S. State Department have repeatedly touted safety standards for the proposed Keystone XL heavy crude pipeline as robust and unparalleled. As proof, they point to 57 “special conditions” that the Alberta-based pipeline operator has agreed to follow.

But environmental watchdogs counter that those much-boasted-about claims are based on nothing more than smoke and mirrors. And they have compiled evidence to back up their accusations.

According to recent research by the Natural Resources Defense Council, only 12 of the 57 conditions set by federal regulators at the Department of Transportation differ in any way at all from the minimum standards the DOT routinely requires for pipeline safety. NRDC is an advocacy organization intent on halting construction of the pipeline.

“Many of these safety conditions are just restating current regulations,” said Anthony Swift, the NRDC energy analyst responsible for the point-by-point study. “But they’ve been used as the cornerstone in the argument that we don’t need to worry about Keystone XL because these 57 conditions will solve any unknown safety risk that the pipeline poses.”

The DOT’s Pipeline and Hazardous Materials Safety Administration is responsible for overseeing hazardous liquid pipelines and enforcing safety measures. PHMSA began drawing up the list of conditions back in 2009 when TransCanada applied for a Keystone XL safety waiver. The company dropped its request for that waiver in August 2010 but announced in April that it would voluntarily comply with PHMSA’s 57 conditions.

These precautionary measures are supposed to address pipeline safety concerns such as puncture resistance, inspections, and welding and construction standards. Both PHMSA and TransCanada said that’s exactly what they do.

The 57 safety conditions the company agreed to with PHMSA are “above and beyond the industry norm,” TransCanada spokesman Terry Cunha told InsideClimate News.

PHMSA spokesman Damon Hill said the list of conditions contains “requirements more stringent than existing regulations,” adding that they “will increase safety from manufacture through operation of the pipeline.”

The $7 billion Keystone XL, now under review by the State Department, would carry oil 1,702 miles from Canada to refineries along the U.S. Gulf Coast. It could deliver up to 900,000 barrels of heavy crude daily.

As part of its analysis of the 57  conditions, the NRDC sorted them into four categories rated by how much difference each would make.

Swift said the dozen that improve upon existing minimum federal standards range from minor to substantive. They include burying the pipeline six to 12 inches deeper than required; assuring that the pipeline is puncture-resistant under pressure; lengthening the time devoted to pressure tests; validating data provided by the leak detection system; bumping up the number of shutdown valves from 104 to 106; providing PHMSA with construction plans, and agreeing to notify PHMSA when spills are reported to the federal government’s National Response Center.

Many of the remaining 45 conditions restate current regulations, Swift said, some repeated word for word. Others, including one requiring the pipeline to be inspected 26 times a year and another requiring tests to prevent the use of defective steel, duplicate minimum standards that TransCanada must comply with via PHMSA or duplicate basic legal safety standards. Five of the conditions detail how TransCanada should keep records and report to PHMSA its progress on complying with each standard.

“Rewording a standard doesn’t mean it’s updated,” Swift said. “And it doesn’t mean a pipeline is stronger or safer.”

As an example of the semantics he encountered during his analysis, Swift pointed to a current federal regulation that covers the inspection of rights-of-way and crossings under navigable waters. It reads: “Each operator shall, at intervals not exceeding 3 weeks, but at least 26 times each calendar year, inspect the surface conditions on or adjacent to each pipeline right-of-way. Methods of inspection include walking, driving, flying or other appropriate means of traversing the right-of-way.”

The Keystone XL special condition pertaining to pipeline patrolling reads this way: “Patrol the right-of-way at intervals not exceeding three (3) weeks, but at least twenty-six (26) times each calendar year, to inspect for excavation activities, ground movement, unstable soil, washouts, leakage, or other activities or conditions affecting the safety operation of the pipeline.”

In its final environmental analysis, the State Department noted that the difference between the two is that the original regulation is “less prescriptive on items to look for during survey.”

“This is one of the many examples of the State Department and TransCanada playing a shell game to avoid addressing the legitimate safety concerns that the American public has with the Keystone XL,” Swift said.

Hill, the PHMSA spokesman, offered five examples of conditions that he said substantially boost the pipeline’s safety. One ensures that the metal used to build the pipeline will be tracked from the production process to its on-site delivery. Another makes the pipeline subject to more stringent pressure testing before installation, and a third requires a TransCanada senior executive to certify that pipeline design, construction and maintenance plans meet all conditions.

The NRDC, the National Wildlife Federation, the Sierra Club and other organizations maintain that safety standards for Keystone XL won’t be adequate until the State Department commits to conducting a study that specifically examines what kind of wear and tear diluted bitumen harvested from mines in Alberta actually has on steel pipelines.

Diluted bitumen—also called oil sands or tar sands oil—is a raw and thick form of heavy crude that is significantly more acidic and corrosive than standard oil. Pumping it at a high temperature and high pressure for long distances is a relatively new and untested venture, Swift said.

TransCanada says the crude oils transported by the Keystone system “are not unique.”  “[They] are similar to those already being transported and processed by other pipelines and refineries across the United States,” said Cunha, the company spokesman. “That includes oil from California, Venezuela and Mexico.”

The head of PHMSA, Cynthia Quarterman, testified at a June congressional hearing that her agency has not studied the risks of oil sands pipelines.

A recent article in The New York Times  documents how chronic understaffing and underfunding at PHMSA has left too much regulatory control to the companies that operate the estimated 167,000 miles of hazardous-liquid pipelines snaking throughout the country’s underbelly.

“We have to keep in mind that our pipeline regulators are not aware of the risk these pipelines pose,” Swift said. “It’s like a doctor prescribing medication for a condition he hasn’t yet diagnosed.”

Will a Study Ever Happen?

On Capitol Hill, three bills—a pair of Democratic measures in the Senate and one bipartisan initiative in the House—would give federal regulators a bigger hammer in preventing pipeline accidents. Two of those measures require PHMSA to study whether current regulations are sufficient for pipelines that transport diluted bitumen. The results of the study would be delivered to Congress.

However, those bills are on hold while Congress wrestles with other issues. Even if they become law, the studies are likely long-term undertakings. By the end of the year, Secretary of State Hillary Clinton has vowed to deliver a thumbs-up or thumbs-down on whether the Keystone XL can cross into the United States. And TransCanada is prepared to start construction as soon as the project is greenlighted.

None of the State Department’s three environmental evaluations of the pipeline has called for research to examine the impact of diluted bitumen on oil pipelines. Review of the project is now entering its fourth year.

Earlier this year, NRDC and other watchdog groups collaborated on a study detailing the potential harm caused by transporting diluted bitumen harvested from the tar sands. They found that increased heat and pressure are required to move the thick oil through pipelines, and that it’s difficult to clean up after a spill.

Researchers also pointed out that diluted bitumen can weaken pipelines and make them susceptible to breaking during pressure spikes because its chemical composition is different from conventional oil. In addition, they found that quartz sand and other solid material in diluted bitumen basically sandblast pipe interiors.

Would a Waiver Compromise Safety?

Swift and numerous other pipeline opponents are paying close attention to the 57 conditions because TransCanada has said that it is likely to parlay its compliance with them into an application to PHMSA for a safety waiver.

A waiver—or “special permit” as the government now calls it—would let the Keystone XL operate at a higher pressure than current federal standards allow for such an oil pipeline. Those pressure standards are set based on the strength and thickness of a pipe’s steel.

Last year TransCanada withdrew a request for a waiver that would have allowed Keystone XL to operate at 1440 psi (pound-force per square inch) instead of 1308 psi, said Cunha, the company spokesman. The latter figure is the maximum amount of pressure a pipeline with Keystone XL’s specifications can handle under existing federal standards.

But the company indicated in a news release that it might again pursue the waiver for higher pressure.

Environmentalists are concerned that TransCanada could be granted the waiver without having to alter the thickness or strength of the steel used to construct the 36-inch diameter pipeline. They say that would be a mistake, because two of the Canadian company’s other pipelines lauded as “world class” don’t have stellar safety records.

The U.S. segment of the first phase of the Keystone project has already leaked 14 times since it began pumping diluted bitumen in June 2010. Twelve of those spills were large enough to be reported to federal authorities, while two of them were reported to state officials. Also, a July explosion destroyed a 40-foot section of TransCanada’s Bison natural gas pipeline near Gillette, Wyo. That pipeline opened in January.

Those incidents are red flags, Swift said, when the same company is planning to route the Keystone XL under numerous rivers and a resource as bountiful as the Ogallala Aquifer. It provides drinking and irrigation water for millions of Great Plains’ residents.

“A lot of arguments being put out there are preventing policy makers from seeing risks that this pipeline presents,” Swift said. “We simply can’t afford to be playing this game when considering a pipeline through our richest water source.” 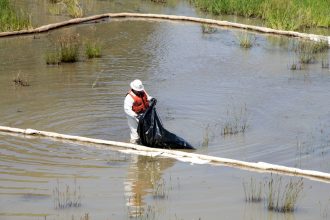