In late September 2017, Interior Secretary Ryan Zinke was slated to make a speech that would showcase his work on President Donald Trump’s “energy dominance” policy.

Instead, he used the occasion to deride his critics and engage testily with hecklers, putting a spotlight on the ethical lapses that would come to define his tenure as the nation’s top public lands steward.

But while Zinke was making headlines that distracted from Trump’s fossil fuel-focused policy, his department was working busily to implement it under the leadership of his deputy, former energy industry lobbyist and agency veteran David Bernhardt. In just the week leading up to Zinke’s speech, Bernhardt met with senior executives of ExxonMobil and with the head of the oil industry’s chief lobby group, the American Petroleum Institute, and visited the U.S. Chamber of Commerce’s Energy Institute, according to his calendar and the agency’s visitor logs.

Bernhardt is now expected to take the helm of Interior—at least on an interim basis—when Zinke steps down at the end of this year amid at least 17 investigations of his taxpayer-funded travel and other expenses and business dealings. [Update: On Feb. 4, President Trump announced he would nominate Bernhardt to become Interior Secretary.]

Any successor would be hard-pressed to match Zinke’s brio—whether outfitting his office for $139,000 doors, having the government pay for his wife’s travel, or becoming involved in a land deal funded by the former chief executive of Halliburton. But observers are convinced that Bernhardt will follow in Zinke’s footsteps in one important way: carrying out the Trump administration’s drive to open federal lands to oil, gas and coal development without restriction.

The Interior Department has either begun or completed at least 19 policy actions requested or supported by at least 16 of Bernhardt’s former lobbying clients, including oil, gas and mining companies and their trade associations, since he joined the administration in August 2017, according to a tally by the Center for Western Priorities. Those policies include rolling back regulations on fracking and methane leaks, rescinding royalties regulations, approving a pipeline right-of-way, reducing protections for endangered species and expanding areas for offshore drilling.

According to the ethics rules adopted by the Trump administration, Bernhardt would have been limited for two years from participating in matters related to his work for the Independent Petroleum Association of America, Halliburton, Noble Energy, Statoil and any other of the more than two dozen clients named in his ethics disclosure forms. But that cooling off period can be sidestepped with a waiver from agency ethics officials. The Interior Department is being sued by the Western Values Project and Democracy Forward over its refusal to release ethics waivers and other information regarding Bernhardt’s work for former clients.

“There isn’t a better example of a walking conflict of interest in President Trump’s administration,” said Jesse Prentice-Dunn, policy director at the Center for Western Priorities. “His corporate clients have gotten virtually everything they’ve asked for.”

‘He Knows Where the Skeletons Are Buried’

Bernhardt is more experienced in policymaking than Zinke, who was a former Navy SEAL and one-term congressman from Montana when he was tapped by Trump for the Cabinet position. Bernhardt served as solicitor in President George W. Bush’s Interior Department, as well as counselor and deputy chief of staff to then-Secretary of Interior Gale Norton and was director of the department’s Office of Congressional and Legislative Affairs. In 2011, he left government and joined the Washington law and lobbying firm of Brownstein Hyatt Farber Schreck LLP.

“He knows where the skeletons are buried and knows how Washington works,” said Athan Manuel, director of the Sierra Club’s lands protection program. “Zinke was in ideological lockstep with this president in terms of promoting coal and fossil fuels and being anti-conservation, but Bernhardt was the one who filled in the blanks. Zinke’s been kind of the figurehead, while Bernhardt knows how to draft policies—which is bad for the planet and the country.”

“David is a very strong leader,” said Ann Navaro, a partner in the law and lobbying firm Bracewell LLP, which represents a variety of energy industry clients. Navaro was at the Interior Department at the end of the Obama administration and early in the Trump administration, when she worked closely with Bernhardt. “He really knows the agency’s mission. He also is very detail-oriented and effective at getting things done.”

Following in the Steps of EPA’s Andrew Wheeler?

While Bernhardt is expected to take over as acting secretary for now, his leadership of the Interior Department could become long-term, since the administration sees him as a known quantity who already has been confirmed once by the Senate and likely would pass muster again. Others have expressed interest in the post, including Sen. Dean Heller (R-Nev.), who lost his seat in the midterm election, and Rep. Rob Bishop (R-Utah), who will have to give up his gavel as chairman of the House Natural Resources Committee when the Democrats take control of the chamber in January.

If Bernhardt does stay long-term, he would follow in the footsteps of another former energy lobbyist and agency hand, Andrew Wheeler, acting administrator of the Environmental Protection Agency, who in a workmanlike manner has carried out the policies begun under the scandal-riddled tenure of Scott Pruitt.

Wheeler, a former lobbyist for Murray Energy, the nation’s largest underground coal company, has spent the months since Pruitt’s departure working to weaken the Obama administration’s Clean Power Plan, restrict the agency’s use of science, and roll back fuel efficiency standards and regulations on mercury. “He’s done a fantastic job,” Trump said last month when he announced his plan to name Wheeler to the top EPA post permanently.

The transitions at Interior and EPA mean that there likely will be less spectacle at the nation’s top environmental agencies in the second half of Trump’s first term, but greater efficiency in carrying out the Trump administration’s retreat from environmental protections and action on climate change.

Bernhardt on Climate Change and Trump

Bernhardt is one of a slew of top Trump administration officials who reject the consensus science that human-caused climate change is an urgent crisis.

Despite the roiling of personnel that has marked the administration, Trump’s second-string choices—including Wheeler; Mike Pompeo, who replaced former Exxon CEO Rex Tillerson at Secretary of State; and Mick Mulvaney, who will replace John Kelly as White House chief of staff—are as adamant as their predecessors in supporting the president’s abandonment of policy to curb fossil fuel emissions.

At Bernhardt’s confirmation hearing last year, when asked by former Sen. Al Franken (D-Minn.) for his views on climate change, he evaded taking a firm stand, but made clear he was there to carry out Trump’s stated mission.

“We are going to look at the science, whatever it is, but policy decisions are made,” Bernhardt said. “This president ran. He won on a particular policy perspective. That perspective is not going to change. To the extent that we have the discretion under the law to follow it … we are absolutely going to follow the policy perspective of the president.” 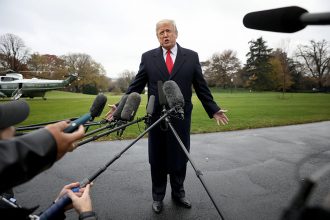 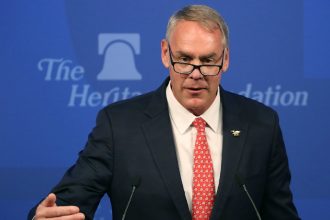 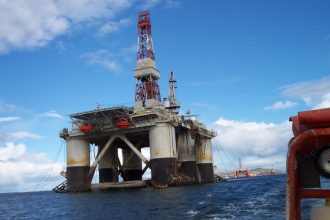 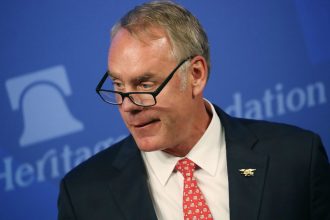