By 2060, large swaths of the planet could be hit by unprecedented heat waves during the summer months that would exceed all historical records, according to a new study by scientists at the National Center for Atmospheric Research.

Just as a severe heat wave sizzles the U.S. Southwest, sending temperatures in parts of Arizona to 120 degrees, this new study predicts similarly dangerous heat will become more commonplace. Without major reductions in global greenhouse gas emissions, the study said there is a 90 percent chance that every summer will be at least as warm as the hottest to date across large parts of North and South America, Central Europe, Asia and Africa.

That means summers like 2012, when extreme heat was blamed for 32 deaths in a two-week period across the U.S., will become the new normal.

Already, four deaths in Arizona have been attributed to the current heat wave and several large wildfires have begun burning out of control in Arizona as well as in California.

The study said that by 2070, as much as 87 percent of the world’s people could face record summer temperatures every second year, unless greenhouse gas emissions are reduced. More extreme temperatures would lead to more heat-related deaths from direct exposure, as well as contributing to the spread of heat-related disease, like mosquito-borne Zika virus, other research has found. Hotter summers also raise the risk of drought that wipes out crop production causing food price shocks and hunger.

Many previous studies have confidently singled out climate change as the critical factor in heat waves, which are widely predicted to become more frequent and intense as global warming worsens. But the researchers said because they used an advanced climate model, this is the most accurate assessment yet of the extreme summer heat expected if greenhouse gas emissions continue at or above current rates.

To project the impact of greenhouse gases on future temperatures, they first reproduced past climate using observed global temperature data from 1920 to 2014. The model allowed them to simulate temperatures for 1,425 possible past summers for the same period. That resulted in a much larger range of temperatures to better compare variations caused by natural factors (such as volcanic eruptions) with the effects of increased greenhouse gases.

They then used two simulations to project future summer temperatures through 2100: one assumed greenhouse gas emissions would continue to rise, while the other assumed emissions would fall because of countries meeting their obligations to the Paris climate accord. The next step was to compare those results with the past temperature data to isolate the influence of man-made climate change from natural variability.

From 1980 through the present and into the future, the trend toward more extreme summer heat caused by global warming became clear, the study found.

“By re-running the model multiple times in different conditions we get a broader range of the evolution of climate. That gives us a better sense of what the warming can be attributed to, and  how much of this variability is natural,” said lead author Flavio Lehner, a climatologist at NCAR. The results showed that most of the increase in summer heatwaves can be attributed to increasing concentrations of greenhouse gases.

“People still have a choice. To some extent we can make changes now to mitigate this,” Lehner said. Cutting greenhouse gas emissions in line with a 2-degrees Celsius temperature target, the goal of the Paris climate agreement, would lower the chances of extreme summer heatwaves by 41 percent, the study concluded.

The new research reinforces other recent studies that show a large percentage of the world’s population—especially the poor—could soon be exposed to deadly heat and potential drought conditions more often. Africa could see deadly heat waves every year beginning as soon as 2040, according to a study published in April in the journal Environmental Research Letters.

Africa “will be affected very soon and very heavily,” said co-author Jana Sillmann, who specializes in studying climate extremes at CICERO, a climate research institute based in Norway. “So far, everybody is saying we can avoid dangerous climate change if we stay below 2 degrees,” Sillmann said. But that doesn’t hold true for Africa. It’s the only continent that sits squarely in the tropics, which means there’s a risk of heat waves all year round, not just in summer. From 2000-2015, Africa experienced hotter, longer and more extensive heat waves than in the last two decades of the 20th century.

Another new study—by researchers with the Max Planck Institute for Chemistry and the Cyprus Institute—predicted extreme and persistent heat across North Africa and parts of the Middle East by mid-century that would directly threaten human health. The average summer maximum temperatures in the region covered by the study would rise from 109 degrees Fahrenheit to about 115 degrees by 2050, and as high as 122 degrees Fahrenheit by the end of the century, the study concluded. It was published online and will appear in July in the journal Climatic Change.

Yet another recent study, also in the journal Environmental Research Letters, found that the poorest 20 percent of the world’s population will feel the heat extremes sooner than people in wealthier regions. Countries around the Horn of Africa and West Africa would be most affected, the researchers found.

The latest projections of increases in dangerous summer heat in developing countries are a big part of the reason that the United Nations upped its estimates of the global cost of adapting to climate change. In a report released during the international climate talks in Bonn, Germany last month, the UN said those costs could soar as high as $500 billion—four to five time higher than estimated just two years ago.

In addition to calculating how much of the Earth’s surface area will be affected by extreme heat in the future, the NCAR researchers also measured the percentage of the Earth’s population that will affected by those changes. They found that the greatest probability of increases in extreme summer heat overlaps with the world’s most populated regions, including parts of Brazil, Central Europe and eastern China. 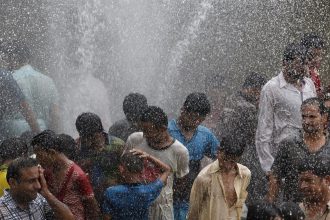