State of the Birds: Dire

A new report identifies 70 bird species that are at a “tipping point,” meaning that their populations have declined so significantly that they could face endangerment or even extinction in the coming years.

The list includes the black-footed albatross, Allen’s hummingbird and the greater sage grouse as birds that have lost at least half their populations in the last 50 years and are on track to lose another half in the next 50 years. The State of the Birds report, published by the North American Bird Conservation Initiative, a group of 33 government agencies and conservation organizations, says these birds require proactive conservation protections to avoid being listed as endangered.

The report also found that more than half of the bird species in the United States are in decline. Species that inhabit grasslands are declining most quickly, while waterfowl like ducks and geese are actually increasing, likely because of the investments in conservation funded by the hunting industry, the report says.

“That shows that when we invest and when we set our mind to it, we can actually make big changes,” said Amanda Rodewald, director of the Cornell Lab of Ornithology’s Center for Avian Population Studies and a co-chair of the State of the Birds science committee.

People may see protecting birds as a “luxury,” she said, and not a priority in the face of so many crises in the world, like climate change. But what’s good for birds is also good for people and the planet, she said. For example, planting trees and other vegetation as bird habitat also helps sequester carbon, protect coastlines from storm surge, increase groundwater recharge and reduce heat in urban areas.

Although the findings of the report are alarming, Rodewald said, she remains hopeful that increased attention and investment in creating a healthier environment will help birds recover.

“Whether it’s climate change, food insecurity, pollution, conflict over dwindling resources, part of the solutions are going to be making sure we have healthy and productive ecosystems that support people and support other species as well,” Rodewald said. “So I think that maybe we’re closer to seeing some real action in that way.”

Can Nature Come All the Way Back?

In all parts of the planet, species are facing changes. Waters around coral reefs are warming. Deforestation is minimizing habitat for Bengal tigers. And an invasive predatory fish in Lake Victoria is devouring diverse cichlid populations.

But nature has a powerful way of rescuing itself, especially when humans stop causing damage and work to restore what’s been broken. Some coral species are evolving to cope with higher temperatures. Connected nature preserves are allowing tigers to migrate across territories and increase genetic diversity. And hybridization between distinct cichlid species is leading to rapid evolution that is helping them to recover from their decline in Lake Victoria.

Stories like this are part of a new book called “The Rescue Effect” by Michael Mehta Webster, a conservation expert and professor at New York University. In it, he offers an optimistic view of the ways nature is persisting amid rapid changes to the environment.

Inside Climate News recently discussed the book with Webster. This conversation has been lightly edited for length and clarity.

Why did you want to write about the rescue effect?

When I was doing work on corals, I was trying to understand what can nature do on its own to deal with the kinds of changes that it’s dealing with and then how can we help? And so I began diving deeply into what’s going on with corals and have done a bunch of research in that area. And I’ve been impressively surprised by how good corals are at dealing with change, and that we may be able to see them persist as the world continues to change going forward.

I found that to be kind of optimistic. And so I was curious as I was doing the work on corals, well, what are other people finding that are working on trees or working on tigers or working on lakes? Are they seeing the same kinds of patterns in nature? And if so, shouldn’t we be talking about that? And so that was sort of the impetus for my book.

How does your book connect to climate change?

Climate change is under the surface in every single one of the chapters, because when we think about what’s going to happen for life on Earth where we are today, we’re sort of at this point where we’ve already done a lot to change the planet. Life is starting to respond to that. But when we look at the trajectory forward, one of the really big drivers of change in the future is going to be climate, and it’s going to affect every species and every ecosystem on the planet. In fact, it already is. Everything is in motion right now.

Now, one good thing is that the rescue effect exists out there and most different kinds of life right now are actually already adapting to the changes that they’re seeing. But some species are getting caught in a world where it’s changing too quickly for them. An excellent example of that are the corals that I’ve spent most of my career working on. We see all sorts of signs that they are struggling as the world is changing really, really quickly. Now, I do think that there are some good reasons to believe that corals are going to be able to evolve to deal with higher temperatures in particular going forward. But there’s a bunch of other stuff that we need to do including beginning to bend the curve on climate change if that’s going to happen.

My optimism really started with some of the work on corals and I went in looking at these other systems to see, are there similar things going on? And there are cases that are covered in the book that are less optimistic. Not everything is rosy. In some cases, we’re moving toward some really hard decisions in nature. But I came away overall optimistic because the rescue effect is strong enough that it’s already working for most species.

We’re at a point in our history where the future is not yet written. We think a lot in conservation about how we’re losing species and ecosystems are changing. And we think of this as sort of this negative trajectory. And while a lot of that is true, we’re at the very early days of that. And so for example, if we want to try and keep most of the species that are currently on the planet around for the foreseeable future, we have the ability to do that, that is not locked in stone that we’re going to lose those. And so for me, part of my optimism comes out of the concept of agency. We get to choose here. It’s not a done deal how this plays out, and we have a lot of ability to affect the future to try and create the future that we want.

A Dystopian Climate Musical With a Message: ‘Change Is Eminently Possible‘

It’s 2045, and the climate catastrophe has arrived. After making half-hearted pledges to stop the crisis, the wealthy and powerful continue to allow the fossil fuel industry to thrive while living in bubble communities. In the outside world, vulnerable to the disasters and depletions caused by decades of inaction, a climate revolution is taking root with a spirit of revenge aided by a mythical magic.

That’s the premise of a new dystopian musical “Metra: A Climate Revolution Play With Songs” hitting the stage at Abrons Arts Center in New York City on Nov. 1, presented by Flux Theatre Ensemble. The play was co-written by wife and husband team Emily and Ned Hartford along with Corinna Schulenburg.

“We use, in some senses, a whimsical setting, to try and address the much bigger picture beyond the actual climate crisis itself to climate justice and the systems of harm and oppression that have brought about the situation we’re in,” said Ned Hartford, who also composed the songs in the musical. “How can you enact the change you need to make if you’re still existing within those systems of harm? We’re trying to encompass a really big scope within this play that we also want to be really entertaining.”

The play’s creators hope that people who see the show are inspired to take action on climate change. They have partnered with the climate activist group Stop the Money Pipeline and plan to encourage audience members to support the group’s work.

Looking to Nature for Insight

A team of scientists recently had a breakthrough in their pursuit of building an affordable and portable system to harvest water from the air using no external energy. Their solution increases the rate of harvest by 110 percent.

The problem with the water harvesting system that Xianming Dai and his team at the University of Texas at Dallas have been working on is that when vapor condenses into a liquid on the surface of the water harvesting device, it acts as a thermal barrier preventing more water from condensing.

The solution they found, detailed in a new paper in the journal Proceedings of the National Academy of Sciences, turns that surface into two distinct layers coated in a hydrophilic lubricant, meaning it readily accepts water molecules. The water condenses onto the upper layer and is immediately swept into microscopic chambers in the lower layer that are shaped in a way that easily lets water in but keeps it from escaping. The water is then channeled away for harvesting.

The idea to make the surface hydrophilic came from studying how plants like the pitcher plant collect water from the air. Dai and his team often look to nature for inspiration when facing an engineering problem, he said. “There can be something very different from the textbook that’s very new and interesting.”

Now that this solution has been documented, Dai hopes to focus next on making the harvesting surface scalable and durable so it can be put to use. He said that water harvesting devices could be useful to remove water from air in processes that require low-moisture air, like drying food or clothes. The water that is removed can then be used for other purposes.

“The idea is feasible,” Dai said. “The next step is pushing forward for broader impacts.” 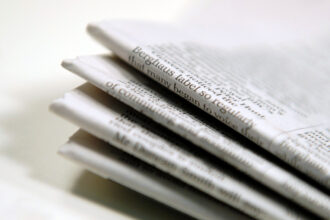 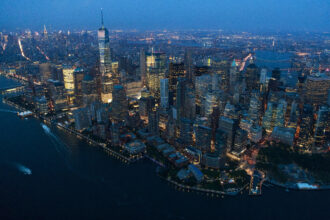