ANCHORAGE, Alaska—It wasn’t long ago that planes would land on the ice surrounding Little Diomede Island, in the middle of the Bering Sea off Alaska.

This year, gigantic waves were crashing on its shores in the middle of winter.

“Now, the ice conditions are so unfavorable—or there’s no ice at all—they can’t land a plane out there,” said Brandon Ahmasuk, the subsistence director for Kawerak, a regional nonprofit that assists Bering Strait communities. That means the 80 to 100 people who live on the island can be isolated for long stretches during winter’s cold, dark months.

On Friday, the National Snow and Ice Data Center announced that Arctic sea ice had reached its maximum winter extent for the year on March 17—its second lowest on record, just behind 2017.

Arctic sea ice grows through the winter and typically reaches its maximum extent across the region in mid-March, then starts to shrink toward a minimum, typically reached in September. For years, as global temperatures have risen, scientists have watched closely as summer sea ice levels dropped to record and near-record lows. They’re seeing it in winter now, too.

“The four lowest (winter maximum) extents have happened in the last four years,” NSDIC Director Mark Serreze said. “What it’s telling me is that the Arctic is really getting hit on both the summer and the winter side.”

Along the Bering Sea, where ice formation limped along this season, communities that are normally protected by coastal ice packed in along the shore were left exposed to open water and the ravages of high winds and storm waves.

The community on Little Diomede—a traditional Ingalikmiut Eskimo village—relies on subsistence hunting. The lack of sea ice means planes can no longer land there to connect them to mainland Alaska. That leaves them with weekly helicopter flights to bring in goods or to transport passengers, but the flights don’t necessarily happen every week. “Getting on and off that island is pretty hard,” said Ahmasuk. “If you do get out there, you might get stuck for a month or more.”

Most locals use a lightweight, 18-20 foot boat for fishing and hunting, said Ahmasuk. The sides are low—just 28 or so inches. “Now, you’re in open ocean with 18-20 foot swells at your back, and it makes the conditions dangerous,” he said. “But people still have to put food on the table.”

The lack of sea ice in the Bering Sea is partially responsible for the overall low ice levels in the Arctic this year. A February heat wave blasted across the Arctic, melting more than a third of the Bering Sea’s ice in just over a week. This was the fourth year in a row that the Arctic has seen an extreme heat wave, according to NSDIC.

When the Arctic hit its maximum extent this year, satellites measured it at 448,000 square miles below the historical average from 1981-2010. That’s just over the size of Texas and California combined.

“To see this kind of stuff happening over these past four winters … Arctic ocean heat waves are just weird,” said Serreze, who has been studying sea ice since the 1980s. “I’ve never seen something like that.”

In Alaska’s farthest-north community, Utqiagvik (formerly known as Barrow), there is open ocean not far from the shore. Meanwhile, the town has seen abnormally high snow levels. “I’ve not seen this much snow in a while,” said Herman Ahsoak, a whaling captain there.

Soon, Ahsoak will head out with his crew to start cutting through the ice to reach the water’s edge so they can begin the spring whale hunt. He said reports from other captains is that the ice is young this year—meaning it’s thinner than ice that survives through multiple seasons—but that it has piled up in a way that is favorable to hauling a large whale up. “It’s young ice, but it got pushed into shore pretty good,” he said. “I’ll find out more when I get out there.” 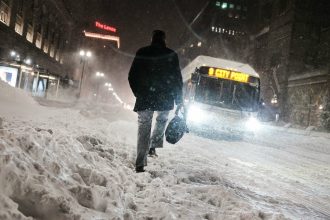 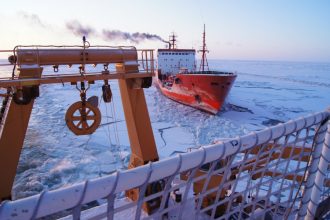 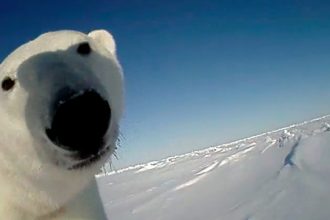