New York environmental regulators have suspended their review of two proposals to renew and expand operations at a Port of Albany oil terminal until Global Partners LP addresses a laundry list of concerns over environmental, public health, safety and climate change.

Officials at the state Department of Environmental Conservation (DEC) told the company in a letter on Sept. 16 it has three months to provide plans for the following:

DEC also informed Global Partners that it is combining the company’s renewal and expansion proposals and treating it like an application for a new project. This dramatic step means even after the company provides the extra information requested by the state, the application will undergo a public comment period and be considered for a comprehensive environmental and climate impact review.

Environmentalists, Albany residents and county officials celebrated the decision, having spent more than two years raising concerns about the oil terminal’s current and proposed operations and fighting it in court.

This case joins a national trend of green and grassroots activism helping to delay and cancel dozens of proposals for new and expanding fossil fuel infrastructure, from oil sands and natural gas pipelines to oil terminals and coal mines. Earlier this month, construction of part of the Dakota Access oil pipeline was halted by the Obama administration in North Dakota, following months of protests led by the Standing Rock Sioux tribe objecting to the project’s potential threat to its drinking water and sacred sites.

“What is so gratifying about the DEC letter is that it requires Global to address every single issue we have raised since 2014,” said Chris Amato, an Earthjustice lawyer who represents the tenants association for Ezra Prentice Homes, a low-income housing development located next to the rail yard associated with the oil terminal. According to Amato, the community “is really, really happy that at long last Global is going to have to…examine the impacts.”

Ezra Prentice Homes is among the communities in the south end of Albany at risk from air pollution and potential train fires. “They are literally at the fence line” of the train tracks, Amato said. “Twenty feet separate the closest homes from oil tankers on the track.”

People in Albany’s South End, which is largely African American, had repeatedly complained to state officials about bad odors wafting from the facilities, among other concerns, since 2012.

“This is a victory for the people of the Ezra Prentice Homes and for the people in the county who live in fear of oil trains every day,” Albany County Executive Daniel McCoy said in a statement.

In response to DEC’s recent letter, Global defended its record. “We disagree with the New York DEC’s decision and believe that we have fully complied with the required permit application process,” said Mark Horan of Rasky Baerlein Strategic Communications, which represents the company. “Global has always been particularly vigilant about the safety of our neighbors wherever we operate and we will continue to work with the Albany community on these issues.”

The source of the oil and how it traveled to the facility also changed during that time. Initially, the oil coming in was refined; it arrived from barges that came up the Hudson River and was then trucked out regionally. The company began handling unrefined, more volatile (and potentially explosive) crude arriving on trains from North Dakota.

Global sought to expand its operations further in 2013, submitting a permit modification request to add seven boilers to the site. Boilers are critical equipment for handling and storing Canadian tar sands; the thick crude is so viscous it must be heated before it can be transferred from a train car to a storage tank.

The company’s initial expansion plan flew under the radar of Albany residents and the environmental community. Global’s 2013 proposals, however, were loudly protested. And regulators responded by installing a permanent air monitor near the Ezra Prentice community in 2015. According to officials, the air showed elevated levels of benzene. Regulators cited these findings in their recent letter.

“The DEC has monitored higher-than-expected benzene levels in the vicinity of the facility that may be attributable, in part, to the storage and processing of petroleum products at the Global facility,” regulators wrote. “Global must address what measures it intends to take to limit, to the maximum extent practicable, any benzene emissions attributable to the facility.”

DEC has identified Albany’s South End, which includes Ezra Prentice Homes, as an “environmental justice” community associated with Global’s operations. In 2013, the DEC updated its environmental justice policy to include more public participation requirements for projects with potential impacts on such communities. In the recent letter, DEC specifically orders Global to take these steps.

Another task for Global, identified by DEC, is to devise a plan to limit any climate impacts associated with the future handling of oil sands, a crude that generates especially high emissions during extraction and processing.

“New York is the most aggressive state in the nation in pursuing action to ensure the public and the environment are protected from risks associated with the federally regulated transport of crude oil,” DEC spokeswoman Erica Ringewald wrote in an email.

State officials are also conducting a more comprehensive review for the permit renewal application of Buckeye Partners, another energy company with an Albany rail terminal. 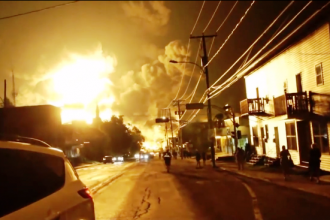 InsideClimate News and The Weather Channel