On a chilly fall day, Eric Kuhn walked along a gravel path above the Colorado River in Glenwood Springs, Colorado. The former head of the Colorado River District, a water agency based on the state’s Western Slope, paused where one of its tributaries, the Roaring Fork, spilled into the river, creating a two-tone stream of beige and dark brown at the confluence.

“About a third of the water that originates in the Colorado River can be accounted for right at this spot,” Kuhn said. The river is fed by melting snow which gathers each winter on the high mountain peaks of the southern Rocky Mountains.

“When I think of rivers, I think of, where’s the water coming from and where’s it going?” Kuhn said. “And what’s happened to this river over the last 100 years?”

In 2021 Kuhn co-authored “Science Be Dammed” with his colleague John Fleck, a water policy professor at the University of New Mexico. The book is a detailed examination of how the river’s foundational agreement—the Colorado River Compact —came together a century ago.

The legal document turns 100 years old this November. The agreement among seven western states to manage the river’s waters was groundbreaking for its time. But the anniversary of its Nov. 24 1922 signing comes as the river is facing arguably its most-pressing crisis. Water supplies are shrinking due to climate change-induced warming. Demands for water have yet to shrink to match the drier conditions. The river’s largest reservoirs are declining to record lows, and forecast to drop further.

And that fact is prompting those grappling with the shrinking river to ask: What benefit is the Colorado River Compact still giving the region’s water users?

By the turn of the 20th century, European settlers were moving into some of the most arid reaches of the country, spurred on by federal incentives for land. The southwest was rapidly developing, but one thing was missing—a stable water supply. The river’s flows were extreme, transitioning quickly from flood to drought.

When the floods came to the agricultural communities of southern California, Kuhn said the new residents began to think of the river as a menace, “and it created a political movement to control the river, this wild, raging river.”

That political climate eventually spurred leaders from the fledgling Western states of Colorado, Wyoming, New Mexico, Utah, Arizona, Nevada and California to view the river as a problem to solve.

“We needed to control nature. We needed to figure out a way to make this river from a menace to a natural resource to something that humans could use and rely on.”

Anxieties about California’s population growth from those in the river’s upper reaches also contributed to the political climate needed for a Colorado River agreement to coalesce. If left unchecked, their thinking went, California could end up controlling the entire river, leaving every other state to scramble for what was left.

That mindset—of needing to control nature—and that jumble of anxieties brought leaders from those states and the federal government to Santa Fe in 1922 to hammer out the agreement. It divided up the river’s water between an Upper and Lower Basin, and promised each basin a fixed amount to use. Each was allocated 7.5 million acre-feet per year. The Compact failed to set aside any water for the country of Mexico, nor to the region’s Native American tribes. Kuhn says the negotiators chose political expediency over science.

“If everyone agrees that there’s enough water to meet all our needs, dividing it up is going to be very easy,” he said. “If there’s not enough water, then it’s going to create complications.”

The river’s gap between supply and demand was baked in from the start, said Kathy Jacobs, a water policy professor at the University of Arizona. Since the Colorado River Compact was signed, a complex legal scaffolding of agreements, court decrees and laws has been built on top of it. But it remains the foundation of the river’s management.

“We’re 100 years later, and obviously our priorities are different than the priorities of the people who existed at that time,” Jacobs said.

The priority then was irrigation water for the southwest’s small farms and the electricity big dams provided, she said. The people negotiating the compact—all white men, mostly engineers, lawyers and politicians—weren’t contemplating what a future Phoenix metro area might need or how their decisions would affect the Grand Canyon’s ecosystems.

The compact put a fixed amount of water on paper, and failed to account for its variability, Jacobs said. As the climate warms, the compact gives a false sense that the region will return to some sort of normal.

“I don’t think that it’s particularly flexible and we’re in a situation where flexibility will probably be key,” Jacobs said.

Because more water exists on paper than in the river itself, its biggest reservoirs—Lakes Mead and Powell—continue to decline to record lows. The current conditions have made 2022 a somber year for Colorado River Compact anniversary commemorations. This summer federal officials called on state leaders to agree to an unprecedented level of conservation to bring the system into balance. Those talks stalled, and tensions among the states grew as the summer progressed. Upper Basin leaders cast the blame downstream, while California’s use came under a new level of scrutiny from users across the watershed. The acrimony among the states, and the failure to coalesce around the needed conservation measures, caused federal officials to step in and begin offering emergency direct payments to farmers to curb their use.

Heather Tanana, a University of Utah law professor and citizen of the Navajo Nation, said the compact also represents how Indigenous people and their interests have been excluded from river management over time. Some of Tanana’s work receives funding from the Walton Family Foundation, which also supports KUNC’s Colorado River coverage.

“Water for many tribes, it’s not a commodity. It’s something sacred. It’s something that’s integral to not just human life, but the broader community and environmental well-being,” she said.

Collectively tribes hold rights to more than 20 percent of the river’s water. But only recently have the states and the federal government taken seriously calls for a tribal seat at the negotiating table.

“That’s been a shift in the last five years of recognizing tribal interests, their legal rights, and beyond that, that tribes can be a part of problem solving,” she said.

It’s unclear if the river’s current legal structure can fully take into account tribal perspectives, Tanana said. Same for other voices left out of early conversations on river management, like those from environmental and recreation groups. Which is why, Tanana said, she doesn’t scoff at people who argue for throwing out the compact completely.

“Realistically, can we throw out the past 100 years of the law of the river and the compact and start from scratch? Probably not,” she said. “But in thinking about throwing out the river then it prompts you to go through an analysis of, ‘Well, what is working? What’s not working?’”

As the gap between supply and demand grows, and the unprecedented nature of the current crisis becomes more clear, Tanana said water leaders in the region can begin to take in more innovative ideas to solve it.

“I’m cautiously optimistic that we’re getting there, but I do think we need to be very creative in how we think and not hold on to something merely because it was agreed upon 100 years ago,” Tanana said.

So with all of its fraught history and shaky scientific grounding, why would anyone want to keep using the Colorado River Compact?

Kevin Wheeler, a river management fellow at the University of Oxford in the U.K., said more water leaders are choosing to simply ignore some of the compact’s finer details. Renegotiating the compact is a non-starter for many state leaders. Newer agreements show some willingness to cut back on overall water use voluntarily, without tinkering with the compact itself.

“Even though no individual state wants to take the hit, they all recognize the need to take the hit together,” he said. “Certainly the numbers that have been etched into stone in the compact may need to be ground out a little bit and rethought.”

Tearing it up would be almost impossible, he said. The region has grown too dependent on it. He says the best way forward is to live with less water. People will end up having no choice but to ignore the compact’s fanciful promises.

“What’s often been said is we’re not going to get rid of it,” he said. “But we may have to bend the hell out of it to make it work.”

This story is part of ongoing coverage of the Colorado River, produced by KUNC and supported by the Walton Family Foundation. 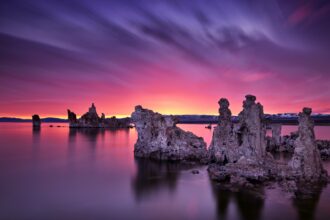