China announced new details about a national cap and trade program on Friday, demonstrating its commitment to tackling climate change.

The plans are a follow-up to the historic announcement China made last November when it pledged to peak its emissions by 2030 in a deal with the U.S., which vowed to reduce its emissions by 26 to 28 percent from 2005 levels by 2025. Friday’s announcement was made jointly with the U.S. during the official state visit of China’s president, Xi Jinping, with President Barack Obama in Washington. It laid out several policy steps the two countries will take to achieve those goals. Specifically, China has pledged to:

In turn, the U.S. pledged to finalize a federal plan for states that choose not to submit their own to comply with new regulations to limit emissions from power plants. The U.S. also joined China in committing to stricter fuel efficiency standards for heavy-duty vehicles in 2016, improving building energy efficiency and reducing emissions of hydrofluorocarbons, a potent driver of climate change.

“When the world’s two largest economies, energy consumers and carbon emitters come together like this, then there’s no reason for other countries, whether developed or developing, to not do so as well,” President Obama said at a joint news conference with President Xi.

The climate deal, which was worked on over several months, is intended to “make clear to the world that we would hit [the emission] targets,” a senior White House official said, in advance of President Obama’s remarks. “This was an opportunity that President Obama and President Xi viewed as one that we needed to seize to demonstrate that, just as we set targets last year, this year we could point forward on our commitment to move forward to reach them.”

China has already been operating regional carbon trading programs and officials had promised to unify those platforms.

“None of this is brand new,” said Changhua Wu, the Greater China director of The Climate Group, an international nonprofit. “It’s been committed to domestically. But, there is a demand to build up momentum to Paris, to bring others together to achieve a climate agreement and from that perspective it’s very significant.”

Currently, about 40 nations and 23 cities or regions, accounting for 14 percent of global emissions, are taking part in some kind of carbon pricing scheme. Linking those systems could lead to a more cost-effective way to drive down carbon emissions. China’s cap and trade program, which will be the largest in the world, provides a new incentive for nations to consider an international trading program.

A commitment from China, the largest carbon emitter, to reduce greenhouse gas emissions and promote clean energy sends a clear signal to countries that are still on the fence, policy experts say.

“In setting a start date for its national emissions trading system, China sends a powerful signal that market-based strategies will play a critical role in the transition to a low-carbon future,” said Bob Perciasepe, President of the Center for Climate and Energy Solutions, a Virginia-based nonprofit. “And by committing $3 billion to help other developing countries, China is assuming shared responsibility for mobilizing critical climate finance.”

So far, more than 60 countries have submitted emission reduction pledges ahead of the international climate treaty negotiations in Paris in December. The pledges account for about two-thirds of global carbon pollution. Two of the largest polluters in the developing world, India and Brazil, have not yet made commitments, but their pledges are expected in the coming weeks.

China’s emissions are almost double that of the U.S., the second-largest emitter, but have been lower recently because of the country’s economic slump.

Wu said that while the downturn was unfortunate, she hoped policy makers would seize the opportunity to fundamentally transform the economy and set the country on a low-carbon track.

Relations between China and the U.S. are fraught with tension as the two countries are deeply divided over issues such as web security and the militarization of the South China sea.

“The climate track becomes more important because that’s the area we can take refuge in,” said Melanie Hart, the director of China policy at Center for American Progress, a Washington D.C- based think tank. “On that issue we can say, ‘Look, we’re achieving something.’ It’s proof that it’s all worth it.”

For a long time developing countries, including China, argued that being asked to curtail their emissions was unfair because it would slow economic growth while developed countries in the West had contributed the most to climate change. That talking point was put to rest last year when China pledged to peak emissions by 2030, ending years of gridlock between developed and developing countries.

Last week, at the U.S.-China Climate Leaders Summit, Chinese officials representing seven cities vowed to take more aggressive action on climate and peak emissions ahead of the 2030 schedule. And on Tuesday, President Xi kicked off his visit by signing an agreement with governors of six states—Iowa, Oregon, Washington, California, Michigan and Nevada—to advance clean energy technology and develop low-emission vehicles.

Republican lawmakers have often argued that China’s muted response on the issue was a reason to delay climate action in the U.S. In a recent GOP presidential debate, Sen. Marco Rubio defended his opposition to carbon dioxide reduction policies, saying, “we are not even the largest carbon producer anymore, China is. And they’re drilling a hole and digging anywhere in the world that they can get a hold of.”

“With China’s commitment, opponents of climate action here in the U.S. are running out of excuses, unfortunately not as quickly as the earth is running out of time,” said Carol Browner, former Environmental Protection Agency administrator and former White House Office on Energy and Climate Change Policy director said in a statement. 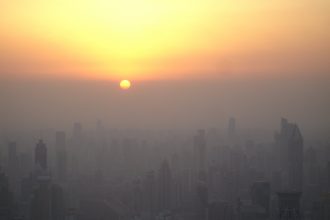