It took more than a decade of worsening climate change projections to get global leaders to promise steeper carbon cuts. Amassing enough money to deal with the problem, it seems, might be even harder.

The latest tally of global climate finance found that public and private investment totaled $331 billion in 2013, down nearly 8 percent from 2012. That spending is “far below even the most conservative estimates of investment needs” to reduce the threat of climate change, according to the 2014 Global Landscape of Climate Finance report, released Thursday by the independent Climate Policy Initiative (CPI), a San Francisco-based group funded by grants from government and charitable foundations.

The total spending last year amounts to about a third of the estimated $1 trillion in extra investment needed each year to 2050—just to transition to low-carbon energy production and use, according to an estimate from the International Energy Agency, based in Paris.

That target, sometimes called the Clean Trillion, doesn’t include investment needed for adaptation to climate change—preparing the most vulnerable nations for rising sea levels, damaging drought and more extreme weather.

Most of the 2013 decline in spending stemmed from private funding, which fell 14 percent to $193 billion last year. Almost all of that downturn, however, was a reflection of plummeting costs for solar power hardware. Solar power installations jumped by nearly a third in 2013, to 40 gigawatts, but investors spent $40 billion less on those projects than they would have at 2012 prices, according to CPI.

Public spending—which provided most of the money that went from developed nations to developing nations—stayed flat at $137 billion in 2013, according to the report. At the same time, governments in developing nations and emerging economies spent $544 billion supporting fossil fuels, the primary culprit of global warming, through subsidies and other financial support.

The report was released just before the first pledge meeting for the Green Climate Fund, the entity that’s supposed to distribute tens of billions of dollars in assistance to countries that are still developing, or most vulnerable to the effects of climate change.

Wealthy countries were asked to pledge at least $10 billion for the initial phase of the Green Climate Fund. On Monday, the total came to less than $9.6 billion. Without an adequately funded GCF, developing countries have said they cannot promise to make meaningful emissions cuts. Under United Nations-led negotiations, every country is expected to limit harmful greenhouse gas emissions as part of a hoped-for global treaty.

Public money given to the GCF is supposed to help spur much larger investments from corporations and private investors. Those private funding sources are expected to provide most of the money needed to tackle climate change.

“What we can see with the recent announcement of the Green Climate Fund is kind of in line with the need to increase investments from the public side,” said Barbara Buchner, senior director of Climate Policy Initiative, and the report’s author. It was a good first step, she said, but more government funding is needed to stimulate private spending.

“In order to really close the [funding] gap we do need significant scaling up of the private sector, because that is obviously where most of the capital is,” said Buchner. “It’s not that there is a lack of capital, but we really need to target it well and take off the risk that private sector isn’t able to [accept].”

Because of her work in tracking climate finance, Buchner was named by the Road to Paris website as one of 20 most influential women in the march toward a climate change treaty.

The new CPI report—her group’s third annual—is the most comprehensive accounting of climate finance trends available, and its findings highlight steps governments and others can take to increase private investment.

So far in 2014, data from Bloomberg New Energy Finance suggest that that clean-energy spending is picking up in the private sector, but it’s still nowhere near the levels required, according to Buchner.

“We are really falling behind, but at the same time there are some positive signals,” Buchner said. “We need to make sure that we build the momentum to start increasing the investment again. Whatever attracts the attention of investors to think more about the area of climate finance is positive.”

A look at the Clean Trillion, what it is and where the world stands in reaching the $1 trillion climate investment goal: 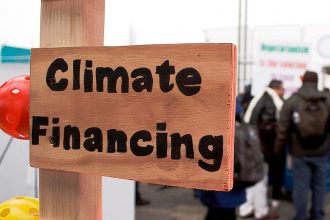