The Arctic’s record-warm winter has allowed thousands of square miles of sea ice off Alaska to melt more than a month early, leaving the shoreline vulnerable to waves and exposing dark ocean water to absorb more heat from the sun.

The loss of ice in the Chukchi Sea will boost the regional temperature and could increase precipitation over nearby land, said Alaska-based climate scientist Rick Thoman.

As of May 24, the ice cover on the Chukchi Sea had melted away from the shore along a 300 mile stretch, from Point Hope all the way to Barrow, the northernmost town in the United States. Satellite and radar data show the ice-free area totaled about 54,000 square miles.

The huge area of open water off the coast is something you would normally see in early July, said Mark Serreze, director of the National Snow and Ice Data Center. The rapid disintegration of the Chukchi Sea ice is an “exclamation point” on a remarkable series of rapid fire Arctic changes, he said.

“It’s another sign that the Arctic is unraveling. We had heat waves in the central Arctic last winter, record-low winter sea ice coverage, and even periods of ice retreat when it should be growing. These extremes are moving from place to place,” Serreze said.

The Arctic climate change underway is caused by the buildup of heat-trapping greenhouse gases.

The sea ice meltdown was just mapped in the past few days. Scientists suspect it was caused by a combination of factors, including an inflow of relatively warm Pacific Ocean water through the Bering Strait and record warmth across the entire Arctic region that persisted most of 2016 and early 2017.

Last autumn, the same area remained unfrozen until late in the season, shortening the freeze-up by at least a month. That meant there was less time for the ice to grow thick, leaving it more susceptible to faster melting in the spring, said ice scientist Lars Kaleschke, with the University of Hamburg. The ice was already unusually thin in the Chukchi Sea in March and April, he said.

The rapid recent decline in ice coverage and thickness has led researchers to believe that most of the Arctic Ocean will be free of ice in the summers as soon as the mid-2020s.

NSIDC researcher Julienne Stroeve, currently based at University College, London, said at a recent science conference that each of the last 10 years saw record-low sea ice coverage, and that there were seven months of record-low sea ice conditions during 2016, setting the stage for a Chukchi Sea meltdown.

Sea ice conditions were so unusual in late 2016 that NSIDC lead scientist Ted Scambos called it a black swan event in December, after reporting record low ice extent in the Arctic and Antarctica, far below natural historic variations. In mid-November 2016, much of the Arctic—spanning an area as large as the lower 48 states—was 30 to 35 degrees above average.

Currently, a thin strip of shore-fast ice remains along Alaska’s north coast, but it’s exposed to the open ocean and will melt fast, which means a much longer season during which waves will batter crumbling permafrost bluffs and threaten coastal roads and communities.

It’s important to remember that a large part of the world’s coast is Arctic, and that erosion, on average, is taking a 1.5-foot bite out of that coastline each year, said Michael Fritz, a polar and ocean researcher with the Alfred Wegener Institute in Potsdam, Germany.

Fritz has been studying how coastal erosion releases organic carbon into the ocean and atmosphere, where it forms more heat-trapping carbon dioxide, which intensifies the cycle of Arctic melting.

The open water that is left exposed when the sea ice disappears also absorbs more solar radiation, further warming the ocean. Thoman said the open ocean could also add moisture to the atmosphere and fuel increased snow and rain over land.

The meltdown of ice in the Chukchi Sea also affects the ability of native Inupiak communities to travel and hunt for walrus, seals and whales.

“When you get this much open water this early, some of the species may be too far away or too dispersed,” Thoman said. 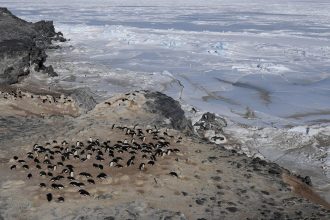