The Biden administration’s choice to head up the Environmental Protection Agency’s office of air and radiation faced sharp questioning during his confirmation hearing on Wednesday from coal state Republicans and a Democrat considered one of the Senate’s most ardent climate-action advocates.

Joseph Goffman, known for consensus building during three decades at the EPA and on Capitol Hill, nonetheless found himself at the center of the conflict between President Joe Biden’s historic goals to tackle climate change and the harsh political realities keeping them from being realized.

The actions Goffman and his colleagues at the Biden EPA have taken so far to curb smog- and haze-forming pollution from coal power plants have West Virginia and Wyoming politicians up in arms, possibly imperiling his nomination as assistant administrator. But they haven’t even begun to meet Biden’s goal of cutting U.S. greenhouse gas pollution by 50 percent eight years from now.

Sen. Sheldon Whitehouse (D-R.I.) held up a chart that he said showed how the Biden administration was falling short on climate: No EPA proposals yet on control of power plant pollution. Standards for cars and light trucks that will result in less emission reductions than the standards set by President Barack Obama. No mandates for zero-emissions vehicles as part of a pollution standard for heavy trucks.

“We’re 16 months into this administration, and in what is widely believed to be a world climate crisis caused by carbon emissions,” Whitehouse said.

He noted how the Justice Department surged, after President Donald Trump’s administration, to prosecute criminal cases stemming from the Jan. 6 attack on the Capitol.

“They stood up an operation that met the moment,” Whitehouse said, urging the EPA to adopt a similar crisis stance on climate change. “When I look at the regulatory output that you guys have to date, I think what’s called for is a regulatory surge of similar or greater focus.”

Under Fire from Congress and the Supreme Court

Goffman first gained his reputation for consensus on Capitol Hill where, as a Senate staffer, he helped design the successful acid rain program Congress passed in 1990. He also helped craft economy-wide climate legislation in 2005 that—for a brief time—garnered bipartisan support in the Senate.

Later, as a top EPA official in the Obama administration, Goffman was one of the architects of the Clean Power Plan—Obama’s signature climate proposal, which set differing goals for reducing emissions for power plants in every state and allowed the states flexibility in meeting them.

Goffman pledged to bring those same consensus-building skills to the job of assistant EPA administrator. He has been serving as principal deputy assistant administrator under EPA Administrator Michael Regan since nearly the start of the Biden administration.

“I believe that all Americans, no matter where they live or what they do for a living, deserve clean air to breathe, a secure job and healthy, safe communities in which to raise a family,” said Goffman. “If confirmed, I will approach our decision-making by bringing all stakeholders to the table and will do so with the integrity, transparency and accountability that Administrator Regan demands.”

But the Biden EPA is confronting obstacles to its climate agenda in both the Supreme Court and in Congress, as the Goffman confirmation hearing made clear.

Although the Obama Clean Power Plan never went into effect—the Supreme Court blocked it without ruling on its legality—Sen. Shelley Moore Capito (R-W.Va.) argued it had a lasting negative impact on her state. “Its mere proposal sent a shock through the energy sector, and combined with other regulations, it contributed in my state to hopelessness, poverty, drug overdoses and despair,” she said.

The state of West Virginia, in fact, is currently seeking a Supreme Court ruling making clear that the EPA has only limited authority to act on greenhouse gas emissions under the Clean Air Act.

When pressed by Capito over that legal question, Goffman declined to take a position but made clear that the EPA was waiting for the Supreme Court’s ruling—expected some time before July—before proposing its own proposal to cut carbon pollution from power plants.

“Do you now have plan B already created in your office, to react to what the potential of a Supreme Court decision might be?” asked Capito.

“We have identified different options for responding,” Goffman responded, “depending on what the Supreme Court tells us the nature and contours of our authority are.”

The fact that Biden has not yet proposed a regulation for the power sector, which accounts for one-quarter of U.S. greenhouse gas emissions, drew Whitehouse’s ire. “I don’t subscribe to the formulation that you should not do anything” while waiting for the Supreme Court ruling, he said.

Flak from Republicans, and a Democrat

The Biden administration had hoped that it would not have to rely on EPA regulation to tackle power plant pollution. Upon taking office, the administration sent Congress a national Clean Electricity Standard. But that was one of the first things that Sen. Joe Manchin (D-W.Va.) insisted on removing from Biden’s sweeping Build Back Better package.

Even after the White House dramatically scaled back Build Back Better—hoping to rely on a suite of clean-energy tax credits and other incentives to reduce greenhouse gas emissions from the power sector—it still has not garnered Manchin’s approval and therefore does not have the votes to pass in the 50-50 Senate.

Manchin has been in talks for weeks with a number of other lawmakers over a further-scaled-back Build Back Better package, but it is not clear whether those negotiations will be fruitful or whether any legislation that emerges from that process will contain the clean electricity measures that Manchin views as a threat to his state.

Meanwhile, politicians from the nation’s No. 1 coal state, Wyoming, also have been doing their part to block Biden’s climate agenda. Sen. Cynthia Lummis (R-Wyo.) has put a hold on Biden EPA nominees, including Goffman, using a parliamentary procedure that allows any senator to block nominations. At Goffman’s hearing, Lummis made clear she objected to EPA’s effort to curb pollution from coal power in her state to address regional haze issues as well as cross-state pollution.

“Air-quality models that are developed for eastern states need to be recalibrated for the western states,” Lummis said.

Goffman said the EPA does take into account the distinctive topography and atmospheric dynamics in western states, and he said the agency is working on negotiating a solution to the dispute in Wyoming.

“I believe we’re very, very close to a resolution with the state and the utility that will allow critical facilities in Wyoming to continue to operate while making the emissions reductions that have been identified as required,” he said.

But while pledging to take into account the concerns of fossil fuel states, Goffman also sought to outline what he said has been strong action by the Biden EPA on climate. He pointed, for example, to the phase-down of potent greenhouse gases used in refrigeration, HFCs, and the development of methane rules for the oil and gas industry that for the first time cover existing facilities.

“I think we’ve set a pace for addressing greenhouse gas emissions using our authority that, at least to the extent that I have anything to do with it, we will be able to maintain and even exceed  in the coming 12 months,” Goffman said.

For Goffman’s nomination to go forward to a vote, Lummis will have to agree to lift her hold, as will Sen. Bill Cassidy (R-La.), who also has a hold on EPA nominees over what he said is the agency’s failure to approve carbon capture wells in his state. If Goffman overcomes those hurdles, he will need at least 50 votes in the evenly divided Senate for confirmation. 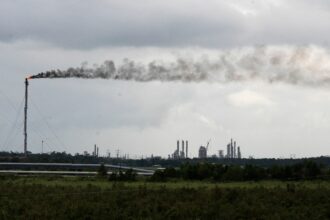 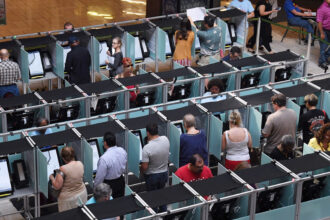