President Donald Trump’s divided team of advisers met at the White House on Thursday to air their arguments over continued U.S. participation in the Paris climate agreement, just as international meetings rapidly approach where allies will expect to hear the Trump administration’s plans.

But there were no signs of a quick resolution. “It’s still under consideration,” said Secretary of State Rex Tillerson on Fox News afterward. He said the group met to discuss “all aspects” of the issue, and that the director of the White House economic council, Gary Cohn, “is leading the effort around coming to a conclusion on that.”

Secretary of State Rex Tillerson, who has maintained that the U.S. should stay in the accord to keep “a seat at the table” in climate change talks, faces an interim meeting on Paris issues May 8-18 in Bonn, Germany, with treaty participants still in the dark about America’s posture. There has been no formal word from Trump on Paris since his campaign pledge to “cancel” the agreement.

Tillerson is former chief executive of Exxon, which has reportedly urged Trump to remain in the accord. At the opposite end of the spectrum, Environmental Protection Agency Administrator Scott Pruitt has argued that the U.S. should exit the agreement, which he calls “a bad deal for America.”

The upcoming Bonn meeting is not an official deadline. But with 195 countries signed on to the 2015 accord, which the United States—the second-largest emitter of carbon pollution—took a leading role in negotiating, international pressure will build for the Trump administration to articulate its stand. The Paris treaty also is sure to be an issue at the G7 summit May 26-27, and White House spokesman Sean Spicer has said a decision on the U.S. position will be announced before that meeting.

The Trump administration was silent on what it would do about the accord even as the president signed an executive order directing federal agencies to rescind the regulations that were put in place to reduce carbon emissions as the U.S. pledged at Paris. Several recent analyses have concluded that the U.S. cannot meet its Paris commitment if Trump’s planned policies are put into effect.

But there have been clear signals that the Trump team is unwilling to do anything that would crimp the development of fossil fuel energy, which it considers a key to its economic policies.

Trump’s advisers have been at odds from the start about whether that means abandoning Paris outright. An internal memo circulating at the State Department bolsters Tillerson’s case for continued engagement in the Paris process, saying that the treaty imposes few obligations on the United States, Bloomberg News reported. Trump’s daughter, Ivanka, and son-in-law, Jared Kushner, both of whom now have formal roles in the White House, are thought to side with Tillerson on staying in the agreement. The Wall Street Journal reported that they were responsible for urging the president to strike language critical of the deal from his executive order.

But White House strategist Stephen Bannon, who has called government support of renewable energy “madness,” is believed to be a leading proponent of abandoning the Paris deal. The website he ran, Breitbart News, portrays global warming as a hoax. (See “Steve Bannon’s Trip From Climate Conspiracy Theorist to Trump’s White House.”)

The conservative advocacy group Competitive Enterprise Institute released internet ads this month arguing that participation in the Paris accord will raise U.S. energy prices and slow economic recovery. CEI’s director of energy and environment, Myron Ebell, served as head of Trump’s transition team for the EPA. Ebell was critical of Trump’s executive order for not including a withdrawal from the Paris accord. “It is important to understand that all these policies are closely connected and that striking down most but not all of them will not be sufficient to undo the damage done by President Obama’s energy-rationing policies,” Ebell said.

Some Trump advisers reportedly have advocated a middle ground: staying in the accord but putting in place more industry-friendly regulations to implement the U.S. commitment. The latest cabinet official to advocate a compromise was Energy Secretary Rick Perry, who said the U.S. should stay in the Paris accord but renegotiate the deal—which was 25 years in the making—in a way that forces European nations to take on a larger share of emissions reductions.

“I’m not going to tell the president of the United States to walk away from the Paris accord,” Perry said at the Bloomberg New Energy Finance conference in New York on Tuesday. “I will say that we need to renegotiate it.” But that is not a compromise that is likely to mollify allies. A spokesman for Germany’s environment ministry called Perry’s position “absurd.”

Earlier this month, at a meeting of G7 energy ministers in Rome, Perry thwarted the group’s customary joint statement on climate change by insisting that it include language advocating “high-efficiency, low emissions coal and natural gas.” Perry’s position reflects the views of some companies in the coal industry, including Peabody and Cloud Peak Energy, that have communicated to the White House their hope that the U.S. will stay in the Paris agreement, Reuters reported early this month. The report said the companies, which see international markets as their future, are hoping that the Paris deal spurs funding for carbon capture and storage technology through multilateral finance entities like the World Bank.

The coal industry is far from united in this view, however. The National Mining Association’s board of directors voted this week to urge Trump to exit the treaty, one day after Pruitt met with the group’s leadership to discuss the Paris accord, according to a report by Politico.

But heavy hitters in U.S. industry are coming out in favor of staying in the agreement.

Sixteen large corporations, including Walmart, Google, Apple and Microsoft, and the fossil fuel companies BP, Shell, Rio Tinto and BHP Billiton, sent a letter Wednesday urging Trump to maintain U.S. participation. “U.S. business interests are best served by a stable and practical framework facilitating an effective and balanced global response,” the letter said. “We believe the Paris Agreement provides such a framework.” The letter was organized by the nonprofit group C2ES, which has worked to build business coalitions for climate action.

A separate open letter signed by more than 1,000 companies, retirement funds and investor activist groups also seeks to make the business case to Trump for staying in the Paris accord. “We want the U.S. economy to be energy efficient and powered by low-carbon energy. Cost-effective and innovative solutions can help us achieve these objectives,” they wrote. “Failure to build a low-carbon economy puts American prosperity at risk.”

Nathaniel Keohane, vice president of the Environmental Defense Fund, put out a statement stressing the economic and geopolitical risks to the United States if the Trump administration withdraws from the Paris accord—including denying the U.S. the opportunity to help write the rules to ensure that China and others live up to their pledges.

“Pulling out would damage the United States far more than it would damage global momentum on climate action,” Keohane said. “It would undermine America’s standing in the world, cede clean energy jobs and investment to China and Europe, and potentially even expose our companies to retaliatory trade measures. 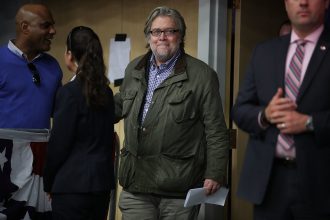 Steve Bannon's Trip From Conspiracy Theorist to the White House