The Biden administration has said it will rely on the nation’s farmers to help achieve the country’s climate goals, but the U.S. Department of Agriculture is paying them millions of dollars for practices that don’t achieve those targets—and in some cases, increase greenhouse gas emissions.

A new analysis published Wednesday and based on extensive public records requests, finds that the agency gave $7.4 billion to farmers through its five major conservation programs from 2017 to 2020, yet only a small percentage of that money went toward climate-related practices. The analysis also finds that the agency failed to provide complete data on these payments.

“With the climate crisis quickly intensifying, the USDA and Congress urgently need to retrofit these programs to meet the moment by prioritizing funding for climate-smart practices,” said Anne Schechinger, a director with the Environmental Working Group, which published the analysis. “Accurately tracking and reporting these funds is just as imperative. Yet the USDA has a serious transparency problem when it comes to its conservation data.”

The analysis comes as the agency is set to receive nearly $12 billion for these programs under the Inflation Reduction Act. It also comes on the heels of a recently announced program that will direct nearly $3 billion toward climate-targeted practices through a new program called the Partnerships for Climate-Smart Commodities. Lawmakers are also gearing up for negotiations over the next farm bill, the massive, five-year bill that many advocacy groups see as a major opportunity to make American agriculture less carbon intensive.

A USDA spokesperson responded in an email that the agency has made addressing climate change a priority and pointed to a recent announcement of $8 million in grants to support monitoring soil carbon, a new cover crop program and the Climate-Smart Commodities program, among other efforts.

“Since day one, the Biden-Harris Administration has taken bold steps to support adoption of climate-smart agriculture and forestry through our existing voluntary conservation programs and has added new tools to the tool box, such as the new Partnerships for Climate-Smart Commodities Opportunity. The Inflation Reduction Act’s focus on climate mitigation will enable us to increase access to [National Resources Conservation Service] programs and take our support for climate-smart practices to the next level,” the spokesperson said.

Republican lawmakers have already signaled that they won’t support climate measures in farm-focused legislation, despite agriculture being a major source of carbon emissions—and a victim of climate change. They have recently introduced bills that would prevent regulators from monitoring emissions from agriculture, codifying existing provisions that already prohibit the regulation of carbon pollution from American farms.

“There are big infusions of money coming for these programs,” Shechinger said. “So it’s super important that [USDA] spends it on the right practices and not doubling down on the practices and equipment that they’ve been funding for decades.”

Over the past year and a half, Schechinger filed multiple Freedom of Information Act requests to obtain access to data from the agency’s major conservation programs, in an effort to find out how the dollars were flowing and for what farming practices. Her analysis focuses on the two largest programs, which are administered by the Natural Resources Conservation Service (NRCS).

The programs, the Environmental Quality Incentives Program (EQIP) and the Conservation Stewardship Program (CSP), pay farmers to employ an array of voluntary conservation practices on their farms, including planting non-commodity crops that prevent erosion and store carbon in the soil, reducing tillage or improving irrigation systems. Within these programs, the agency identifies practices that it deems “climate-smart,” assigning them with a particular code in its databases.

According to the analysis, however, only 23 percent of the agency’s $3.6 billion in EQIP payments from 2017 to 2020 went to practices that mitigate climate change, or were coded as “climate smart” by the agency. That’s roughly $843.85 million over the four-year period. And of those, about 40 percent went to farmers for cover cropping, which only offers temporary benefits unless maintained for long periods of time, research shows.

“We shouldn’t be relying on one practice,” Schechinger said. “It’s really ephemeral. Cover crops are good for soil and water, but the science isn’t there yet [on climate impacts]—are there going to be any benefits for the climate if you only use cover crops for one year?”

Another big chunk of EQIP spending paid for the construction of infrastructure for livestock facilities. These were not identified as “climate smart” by the agency, and according to the agency itself, actually increase greenhouse gas emissions. These include irrigation structures, which can worsen drought, and manure lagoons, which emit methane. More than $170 million went to these “waste storage facilities.”

Under directions from Congress, half of all EQIP spending is required to go to livestock-related practices, which has had the effect of building in more livestock infrastructure for factory farms, or Concentrated Animal Feeding Operations (CAFOs), critics say.

“That’s a big reason we’re seeing what we’re seeing, and so much money going to CAFOs,” Shechinger said. “A lot of these practices are the cost of doing business. Putting up a fence to keep cows off of land or building an irrigation pipeline—it’s what you have to do to farm. It’s not what people think of as environmentally friendly.”

The other major NRCS-run conservation program, the CSP, gave about $3.7 billion to farmers for conservation practices and enhancements. EWG found that only 5 percent, or just under $195 million, went to practices the agency determined were “climate-smart.”

But these figures don’t represent a complete picture. The data provided to EWG reflected payments by land type, not by practice, and did not include county-level data unless there were more than five contracts awarded. In other words, there are big data gaps.

“EWG struggled for almost a year to get correct, complete data from the agency,” Shechinger explained. “And there are meaningful gaps in the data we did get. For example, we can’t tell which practices were most funded by the Conservation Stewardship Program because of how the USDA categorizes and shares the information.”

Schechinger acknowledged that the programs were not originally intended to be climate-focused programs. But, she noted, that the agency intends for them to be the “cornerstone” of its climate efforts.

“Just because they haven’t been climate programs, doesn’t mean they shouldn’t be,” she said. 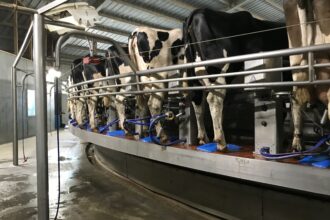 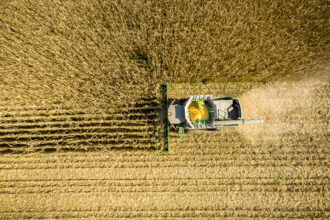 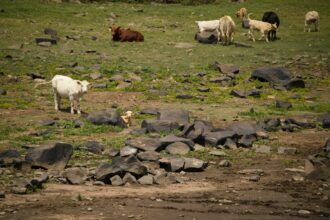 The Bureau of Land Management Lets 1.5 Million Cattle Graze on Federal Land for Almost Nothing, but the Cost to the Climate Could Be High