It might not be the largest crowd ever assembled on the National Mall, or the hottest spring day ever recorded in the nation’s capital, but the heat was oppressive enough, and the People’s Climate March impressive enough in scale to send a message.

Climate change is here, and it’s real, their banners declared. And we are not going to give up in confronting its causes and holding the powerful to account.

The Donald Trump administration all week long has been serving up the policy equivalent of red meat for this green crowd. It’s the Trump agenda, after all, that drove the turnout for the march in Washington, D.C., on Saturday, April 29.

Organizers estimated that 200,000 people were on hand, and given the distance and duration of the parade, filling the main thoroughfares from curb to curb, the tally did not seem exaggerated. People continued to join the march mid-afternoon, even as some early participants headed home.

Jane Eller of Lexington, Kentucky, who worked for an environmental education agency there before retiring, walked across the mall with a sign declaring herself a coal miner’s granddaughter and a grandmother of the solar generation. She said she had spent days trying to influence the state’s Congressional delegation, urging aides to bring in scientists for briefings, to no avail: “They’re all deniers,” she said.

Her delegation asked Senate Majority Leader Mitch McConnell (R-Ky.) “to become a leader in all this,” she said. “We asked him, ‘Who should we hold accountable when the climate damage becomes intolerable?”

This march, timed to coincide with Trump’s 100th day as president, resembled others since the election—the giant, all-inclusive Women’s March in January, the rain-drenched March for Science last weekend. Like the others, it was mirrored in cities around the nation.

The day was glorious, bright and breezy, even if the pavement was becoming a griddle. The temperature reached 91 degrees, tying the record for this date. That was enough to bring out vendors in full summertime force: the T-shirt peddlers and ice cream trucks were doing brisk business.

Nothing energized the crowd, it seemed, more than passing in front of the Trump hotel at the site of the landmark old Post Office building on Pennsylvania Avenue. They slowed down to boo, chant “Shame! Shame! Shame!”, wave their banners and take selfies, the viral currency of their social media campaign.

As the march drew closer to the White House, there was a brief sit-in stretching for several blocks. The sitting marchers chanted: “This is what democracy looks like.” Other chants heard across the march included: “We will not go away, welcome to the 100th day” and “The oceans are rising and so are we.”

In conversations with dozens of marchers before the formal parade began, the protesters were universally aware of the relentless stream of anti-environmental policy decisions pouring from the White House. In the past week alone, the administration has taken actions to try to end protections against offshore drilling in the Arctic, review the conservation status of large national monuments, dismantle the Environmental Protection Agency’s climate web pages, and figure out how to retreat from Paris climate treaty obligations.

Climate justice was also a running theme for many members of indigenous groups and young people in the crowd. “This is a critical time to learn from the mistakes of the past and include front-line communities in resilience planning for climate change and sea level rise,” said Kilan Ashad-Bishop, a graduate student at the University of Miami, in a press-conference before the march. “What does that mean? Well, as a black woman, if you don’t have someone that looks like me at the table, you are doing it wrong.”

Celeste DiLeo, a 13-year-old from Plainfield, Massachusetts, stood next to her father along Pennsylvania Avenue, where the march was just getting under way. Above her, etched in marble on the edifice of the Newseum, were the words of the First Amendment protecting people’s right “peaceably to assemble and to petition their government for redress of grievances.” Her sign read: “Earth doesn’t have 4 years.”

“We live on a farm,” she said, “and we have been seeing changes already.”

United by shared concerns over climate change, 21 youth from across the nation are taking the federal government to court. They allege in a lawsuit that the government, in supporting policies and actions that exacerbate climate change, have put their lives at risk. About a half of the plaintiffs came to Washington, D.C., to participate in the march; the other half attended the March for Science last weekend.

“Today is great,” plaintiff Isaac Vergun, 15, told InsideClimate News, while holding the end of a large banner about the lawsuit. “There’s a lot of people here—more than where I’m from.” Vergun’s hometown of Beaverton, Oregon, has a population of about 95,000. 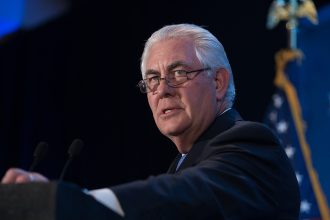 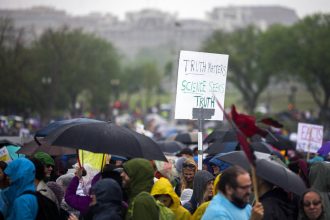 Tens of Thousands March for Science, Against Trump's Policies 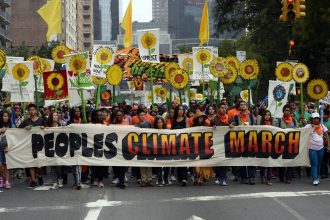