Climate Week presented a two-front push for nations to take action on climate change. The moral case was emphatically made by a record-setting, 400,000-person march through Manhattan. What followed was a similarly unprecedented barrage from investor groups and corporations to convince world leaders that there’s also a compelling economic case for taking steps against global warming.

The business presence last week was particularly striking because of its breadth and heft, and because of its extension well beyond the so-called “green bubble” that surrounds companies, investors and advocacy groups who embraced the cause long ago.

Signatories representing $26 trillion in investment funds called on world leaders to enact strong policies, cut fossil fuel subsidies and make polluters pay for the effects of their emissions. There were commitments and pledges from the likes of General Motors, food makers Mars Inc. and Nestle, and consumer products giant Unilever. And a string of corporate CEOs joined early-adopters like Ikea Group in supporting renewable energy and citing proof that companies and countries can tackle climate change and prosper at the same time.

“More and more businesses are coming forward and saying look, we can do this. We can cut energy use, we can become more efficient, and we can provide solutions—and this represents an enormous biz opportunity,” said Paul Simpson, chief executive officer of London based CDP, a company that collects corporate climate change data on behalf of shareholders. “That’s not a completely new message, but I think there are far more companies on board with saying it, and that’s really a fundamental shift.”

Certainly, there is plenty of reason to distrust the pronouncements. There’s a long history of companies engaging in greenwashing by applying a veneer of environmental goodness to get a public relations boost. What’s more, it’s clear that some company pledges are driven by pragmatism, while others are at least partly the result of boycotts or pressure from outside groups to change destructive practices.

Whatever the reason, there were signs of a shift among companies that have the largest role in worsening climate change by profiting from the felling of carbon-ingesting trees, or letting greenhouse gases escape as part of their operations.

Two dozen palm oil companies and traders added their names to the pledge to help halt the advance of deforestation by 2020. And several oil and gas companies broke rank from the industry’s largest companies by agreeing to change their drilling and production practices to count and cut their emissions of methane, a potent greenhouse gas.

Such corporate commitments are increasingly demonstrable and many of them now include verification measures. More than 5,000 companies now formally disclose details about emissions and actions on climate change to CDP. The company analyzes and grades performance on behalf of pension funds, Goldman Sachs, BlackRock and others that together control $90 trillion in assets.

Those messages were part of a week-long show of force that included the marchers, faith leaders, public officials and others. All of them were there to rally support for a global agreement among nations that would include deep cuts in fossil fuel emissions as well as reliable commitments to renewable energy and low-carbon economies.

The focal point was the Sept. 23 United Nations Climate Summit and the more than 100 world leaders who converged on New York to attend it. The event was meant to galvanize climate treaty negotiators as they lay out a draft agreement and their own climate commitments in the 15 months before final negotiations take place in Paris in December 2015.

In the years since the UN Framework Convention on Climate Change began the push for a comprehensive climate treaty, researchers have refined the science of global warming and the current and future dangers have become increasingly clear. In previous negotiations, nations pledged to reduce carbon emissions and agreed to limit warming to 2 degrees above pre-industrial levels—a conservative benchmark thought to offer the world a chance of avoiding catastrophic effects.

But concrete action within many nations has been either too slow or nonexistent. Governments and companies have long linked the use of coal, oil and natural gas with economic growth and prosperity, and many world leaders therefore view the push for emissions cuts as a call for deprivation.

Metzger of the World Resources Institute said that’s what made last week’s blitz from business so important.

“There were a lot of heads of state leading up to this [summit] that were very curious about what companies were going to say because they needed talking points for their speeches…so they could say, look, this isn’t going to kill jobs, this is something that a lot of companies are behind, and this is, in a lot of cases, good for the economy,” Metzger said.

He paraphrased comments from Ikea CEO Peter Agnefjall, who urged an audience of government leaders to act boldly on climate change, reassuring them, “You take that ambitious step, and we’ll be there to support you. We’ll be there behind you.”

That kind of message, Metzger said, “helps a lot for those heads of state who feel like they’re putting their neck out there with industry if they’re going to regulate carbon or put a price on carbon.”

It didn’t hurt to feature an appearance by Apple Chief Executive Tim Cook, who holds rock star status among electronics consumers and happens to run the world’s most valuable company. Many noted that his presence was particularly significant because Apple was almost simultaneously launching sales of its new iPhone.

“You always make time for the [things] that are truly important, and this is truly important for our company, for our planet, our employees, our customers—everyone,” Cook said. On the issue of climate change, he added, “the time for inaction has passed.”

Apple owns a massive solar farm and 94 percent of the energy used in its data centers and corporate operations comes from renewable sources. What the company gets in return is secure power at a stable and predictable price. Cook said the company is now working on improving the operations of its manufacturers and suppliers.

The important thing is “not accepting that there’s a trade-off between the economy and the environment…what we’ve found is that both are doable,” he said. “If you innovate and you set the bar high, you will find a way to do both—and you must do both because the long-term consequences of not addressing climate are huge.”

Mindy Lubber, president of Ceres, a Boston-based non-profit that brings together networks of investors on corporate sustainability issues, summarized the week this way: “More than ever before, the business community was loud and clear about the urgency for climate action, making strong commitments to reduce their own impact while advocating for strong national and global policies to tackle climate change.” Taken together, she added, “This is a huge step forward.”

Here’s a snapshot of the business-related activity during this year’s Climate Week. 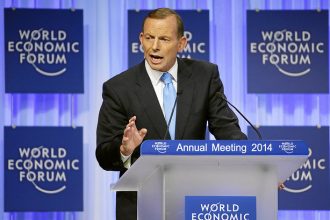