The world’s already overtaxed fisheries are being stressed to their limits by climate change, putting at risk a critical component of the world’s diet. As temperatures rise, fish populations are projected to plummet and disappear in some regions, especially in the tropics.

In a major report published Sept. 25 by the United Nations’ Intergovernmental Panel on Climate Change, scientists examined the interconnected web of the planet’s oceans and icy landscapes, delivering a series of grim projections on the chaotic impact of climate change on super-charged storms, rising seas and the ecosystems that sea life depends on.

They also looked at the consequences for global diets and the role oceans play in feeding the world.

Fisheries are often overlooked when researchers and policymakers focus on land-based agriculture as the primary food source for a growing global population, yet fish are an essential protein source for 3.2 billion people and provide 17 percent of the world’s animal protein. They’re especially important in some developing tropical countries that rely on fish for 70 percent of their nutrition.

“The changes in the oceans will have direct impacts on people who are depending on these systems for food,” said William Cheung, a professor from the University of British Columbia and a lead author of the report’s chapter covering fisheries.

The scientists determined that the sustainable fish catch—the amount of fish that can be caught without decimating populations—could drop by as much as a quarter by the end of the century if greenhouse gas emissions continue on their current trajectory.

The oceans have absorbed about 90 percent of the excess heat and about a quarter of the carbon dioxide from fossil fuel burning and other human activities, leading to rising ocean temperatures, increasing acidification and lower oxygen levels that will have an impact on sea life. Shellfish won’t be able to develop shells properly; harmful algae blooms will proliferate, choking off coastal fisheries; and populations of fish will continue moving to cooler waters, leaving behind the fishing communities and economies that have depended on them for centuries.

“The current science suggests that as the ocean warms and loses oxygen, the body size of animals will be reduced, the distribution of fish will change and the surface production of phytoplankton is going to decline,” said Lisa Levin, a professor at Scripps Institution of Oceanography and a lead author of the fisheries chapter. “When there’s less plankton at the base of the food web, there’s going to be less fish.”

Impacts from the Tropics to the Arctic

As the world speeds toward a population of 9 billion people by 2050, the loss of fish as a protein source could mean increased pressure on other ecosystems, including forests cleared for cropland and existing cropland that’s already strained from overuse.

In tropical countries around the planet’s equatorial belt, particularly small-island developing nations that are also at risk from sea level rise, the loss of fish stocks could prove devastating, nutritionally and economically.

“Climate change will take the food out of their mouths and the places they live away from them,” said Doug Rader, chief oceans scientist with the Environmental Defense Fund, who was not involved in the report. “Even with aggressive emissions scenarios and highly effective management, they will lose 20 to 40 percent of their fish production. There are literally hundreds of millions of people who live in that most at-risk belt.”

Communities at middle and higher latitudes will see changes, too.

Cheung explained that some North American communities that rely on salmon could lose those populations as streams warm and fish migrate farther north, and that indigenous communities in the Arctic that depend on sea ice as hunting grounds could lose access to key food sources.

“Shifting the abundance and distribution of these resources may have direct impacts for food, culture and livelihoods,” he said. “In Arctic regions, many communities are dependent on sea ice. With high emissions scenarios, we are seeing the continuous loss of sea ice and higher frequencies of no sea ice in the summer.”

Researchers have also projected the northward migration and disappearance of some tuna species from the tropics and of cold-water-loving species like lobster, which will move poleward as waters warm.

Many Fisheries Are Already in Trouble

Fish populations in many regions have already dropped significantly because of overfishing and the accelerating effects of climate change. Roughly one-third of the ocean’s fish stocks are already fished at “biologically unsustainable levels,” triple that of the mid-1970s, according to the UN Food and Agriculture Organization (FAO).

Overfishing by commercial fleets with large boats and aggressive fishing methods, such as trawling, led to the devastating collapse of the East Coast cod fishery in the early 1990s and, more recently, the herring population. Some researchers suggest that the drop in fish stocks is even higher than the FAO states because government agencies and regulators don’t have complete assessments and figures.

“Ocean warming in the 20th Century and beyond has contributed to an overall decrease in maximum catch potential, …. compounding the impacts from overfishing for some fish stocks,” the new IPCC report says.

Most of that overfishing has occurred as commercial fleets go after larger, high-value fish for the global marketplace and to satisfy growing demand for seafood from developed countries.

“Most of the overfishing has not been to feed the hungry,” said David Helvarg, executive director of Blue Frontier, a marine conservation group. “It’s been for supermarkets and white-linen restaurants in the developed world.”

Fish consumption reached a historical peak in 2016 at about 45 pounds per capita. Much of that is attributable to aquaculture—farming fish in contained waters—which in 2016 produced more consumed fish than commercial and traditional “capture” fisheries.

“Globally, we’re following the terrestrial experience. We’re transitioning from buffalo to cattle,” Helvarg said. “We’re consuming more fish, but less of it is coming from the ocean as we’ve depleted the commercial stock.”

“The shift toward aquaculture will expand, but we’re going to become a nutritionally depleted world,” Helvarg added. “We’ll be eating a much more limited amount of fishes based on what we can grow in concrete tanks.”

In some ocean fisheries, fish stocks have rebounded or stayed level as sustainable management systems placed catch limits on species in certain areas. But these are under threat, too.

“Those systems are based on historical patterns that no longer exist,” Rader said. “Fish populations are already moving, and they’re moving faster than anyone expected. Unless more agile management systems are put into place, all bets are off.”

Despite all the alarming news in this week’s report, the authors emphasized solutions and options — but stressed that they need to happen quickly, across all ecosystems, not just the oceans. Storing carbon in forests and soils will also prove critical.

“It’s a call to action,” Levin said of the report. “The mitigation solutions that involve the ocean include protecting natural carbon storage and enhancing it through restoration of mangroves, salt marshes and sea grass beds. We can reduce emissions on the ocean by reducing shipping emissions. … The ocean can be involved in the solutions.”

Better management of fisheries and policing of illegal fishing also will help save fish stocks, as will setting aside large and more marine protected areas, among other measures. But reducing the fossil fuel emissions that drive ocean warming and all its cascading effects remains the critical priority.

“If we can reduce emissions … we can substantially reduce the scenario we project,” Cheung said. “If we engage with sustainable management and consumption of seafood, our report suggests that good resource management can increase the resilience of fish stocks to climate change.” 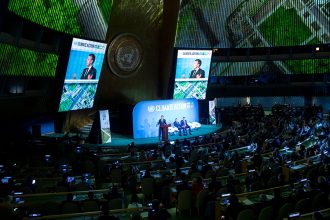