Michael Wood Jr., a Marine Corps veteran and former Baltimore police officer, is leading a group of 2,000 veterans to North Dakota this weekend to join ongoing protests against the Dakota Access pipeline.

Wood, 37, made headlines last year for speaking out in a series of tweets against what he viewed as wrongdoing within his police department. He spoke out after Freddie Gray died from a spinal cord injury after being taken into custody by Baltimore police and is a prominent supporter of the Black Lives Matter movement.

Earlier this month, Wood and fellow veteran Wes Clark Jr., son of former General Wesley Clark, put out a call for 500 veterans and $100,000 in funding to help oppose what they feel is escalating police violence against the Dakota Access protesters. The group, Veterans Stand for Standing Rock, had to end the sign-ups after 2,000 veterans signed on. The group has received more than $580,000 via an online funding campaign to help pay for travel costs, winter camping, communications, protective gear and money to post bail.

Thousands of protesters, mostly Native Americans, have camped since August just north of the Standing Rock Sioux reservation where the largely completed pipeline would cross the Missouri River. The standoff escalated on Nov. 20 when law enforcement used fire hoses, tear gas and stinger grenades on protesters who were trying to clear a roadblock at the end of bridge on a public highway. Last Friday, the U.S. Army Corps of Engineers notified the Standing Rock tribe that the public will no longer be allowed at the campsite, which is on federal land. On Monday, North Dakota Gov. Jack Dalrymple ordered an emergency evacuation of the camp. The Standing Rock tribe said the land is part of their ancestral treaty lands and that they will not leave.

ICN: Why are you doing this?

Michael Wood Jr.: I think a lot of us are doing this for different reasons. For Wes, he is very focused on ecological protection of the planet. If you are a conservative, you are watching hundreds of millions of dollars being spent on state-sanctioned agents of violence. [Editor’s note: North Dakota officials said they have spent more than $10 million on additional law enforcement thus far.] If you are a libertarian, you care about property rights and freedom. Me personally as a police scientist [the study of police work and criminal justice], I am focused on police reform.

ICN: What do you hope to achieve?

MW: Personally, I want to go across the bridge and take the whole site. But as a whole group, the goal is to bring attention to it, that Native lives need to matter in our systems just like black lives need to matter in our systems. This is that moment in history where there is a change in the tide. Are we going to create the country that it was intended to be, where we care about all of our people and we protect them from state-sanctioned violence?

ICN: How is this connected to the Black Lives Matter movement?

ICN: What do you make of the tactics law enforcement are employing?

ICN: The protest at Standing Rock started in April. Why are you doing this now?

MW: It really got to the point where it was just too much. A lot of credit goes to those protesters who are up there now who have created the attention that opened our eyes to understand that we need to get up there.

ICN:  If you’re only going to be there for three days, what can you accomplish?

MW: We’re not going to be there for three days anymore. We were hoping and praying that we could get maybe 500 people and $100,000, but everyone has stepped in and really contributed. We’ve set up a new roster where we already have 500 people ready to stay there for the next shift. We are going to keep a contingency of 500 veterans there at all points in time.

ICN: How will your approach differ from prior demonstrations at Standing Rock?

MW: We’re not releasing everything that we’re doing, we do have some support missions, which we think can make a difference on their own. Beyond that, my primary focus is I want to cross the bridge [the bridge that protesters were standing on when police tried to push them back on Nov. 20]. I want to do it with negotiations. I want to talk to everybody there. If they [law enforcement] want to shoot at 2,000 veterans who are going to walk peacefully across a bridge, so be it. That is what we need to do to make sure that we protect our planet, stand up for Native American people, protect black lives, protect native lives and protect the Earth.

ICN: Have you been in contact with the Morton County Sheriff’s Department or the Army Corps? What are they saying? How have you responded?

MW: We’ve reached out a few times and we’ve had some brief contact. I will go there personally myself. These cops don’t want to do this. If we can’t break the system, we can break the hearts and minds of those officers so they realize what they are doing. Hopefully with an entire battalion of people from around the nation who are vets and protecting this country, there is no way around it. There is going to be every race, every religion, every nationality, every geographic region of people that have served this county and stood on that wall. If they are willing to come after us, then that’s fine. We’ll take that brunt, but that is how you create 10,000 of us next time.

ICN: Is anyone telling you to stand down?

MW: You’re always going to have some naysayers. I think that what the Morton County Sheriff’s department, the governor and the Army Corps has said [abut evacuating the camp] was a desperate plea to get us to stand down. They think we were going to be scared, because they don’t want to be out there in this cold. We’re prepared for it. They’re not.

ICN: Do recent announcements by the Army Corps and Gov. Jack Dalrymple to shut down the protest camp affect your plans in any way?

MW: No way at all. It’s a bluff. They don’t have the force, and what are they going to do? Come in there and kick us off? We are there to support the tribes, if they [law enforcement] want us to pack up and move the camp somewhere else, so be it. I really don’t understand why they think that is going to matter.

ICN: A recent video shows law enforcement putting up additional razor wire.  It looks like they are preparing for your arrival.

ICN: But you are ready to use force if needed?

MW: We will not use force. They will use force.  We will walk across roads that were publicly funded, that we paid for.

ICN: You previously said one issue the police are going to face is that your level of planning and coordination is vastly superior to theirs.

MW: The amount of experience we have is vastly superior to what they have collected. I don’t mean that as an insult. We are going to stay calm. We are going to be disciplined. We are not going to be the one that is going to break across the line. They will. They have been doing it the whole time. There is no reason to believe anything else will be any different. 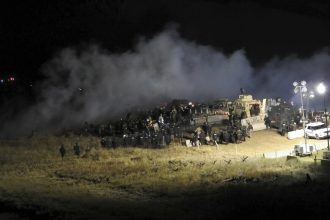 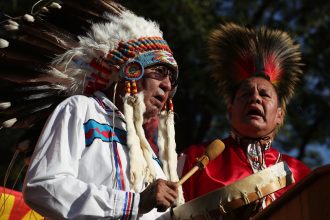