Frank Varano knows what’s coming. His land near Williamsport, Pa., abuts property that has been leased for gas exploration––and he’s certain it will be fracked.

What is less certain is how that fracking could affect the air he breathes and the water he drinks.

That’s why he welcomed the opportunity to have two Columbia University scientists test the air inside his house and the water in his well before fracking gets started late this year.

Last year an air monitor was set up inside his Lycoming County house, and water samples were taken from his well in advance of the drilling and fracking planned for the 10-acre site that sits 500 feet from his place.

Varano is one of 15 residents in Lycoming and Sullivan counties to allow geochemists Beizhan Yan and Steven Chillrud of Columbia’s Earth Institute to test the air and water on their land before fracking proceeds. The two scientists want to establish a baseline of the quality of air and water and then continue monitoring as the operation progresses from drilling and fracking to functioning wells.

It’s the best way to understand the risks people face when fracking––hydraulic fracturing––starts to encroach on their homes, the two scientists said.

“The data will provide an objective viewpoint to drive a more rational discussion,” Chillrud said.

Varano and the others participating in the Columbia study live atop the Marcellus Shale formation that covers more than 100,000 square miles in a half-dozen states from New York to West Virginia and Ohio. The shale could hold the largest natural gas reserves in the United States, according to some industry estimates.

Fracking cracks open the shale by the high-pressure injection of a mixture of water, sand and chemicals into the formation. The fluids crack open the shale rock, and the natural gas seeps out.

Fracking chemicals and naturally occurring toxins such as nitrous oxides, volatile organic compounds, benzene, toluene and hydrogen sulfide can be released into the air or groundwater. That contamination can pose health threats, including an increased risk of cancer and respiratory illness.

In Texas, where fracking is booming, InsideClimate News and the Center for Public Integrity found that air emissions from oil-and-gas development are among the least regulated, least monitored and least understood components in the extraction-and-production cycle.

In instances across the county where people have complained about volatile organic compounds in groundwater and in the air near a fracking site, the industry has argued that the chemicals were there before oil and gas development began.

Baseline studies would avert a heated “he-said-she-said” argument over whether the well is the source of contaminants, Yan and Chillrud say. A recent InsideClimate News report found that the Environmental Protection Agency’s five-year fracking water study won’t have baseline comparisons of water chemistry before and after fracking due to opposition from industry.

The scientists have plans to use portable and stationary air monitors to measure individuals’ exposure levels to volatiles, soot, silicon, metals and other substances as part of the $40,000 pilot study the pair hopes will lead to full-scale research.

The two scientists say they see the importance of this study reaching far beyond the backyards of a few houses in northern Pennsylvania.

If the study shows there are negative effects to air and water from fracking, it could highlight ways to minimize those impacts and position the U.S. to take a leadership role on this issue, Chillrude said.

The boom in fracking has raised concerns about the effects on air and water across the country. From California to Ohio, and from Texas to Colorado, people have gone to the ballot box to protect the air they breathe and the water they drink by enacting bans on fracking.

“This is a polarizing issue to communities,” Chillrud said. “The people who want it argue from an economic position and people who want to stop it say they are worried about the air quality and water quality,” he said.

“We hope our study can take some of the emotion out of the debate.” 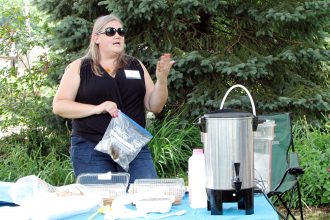