In October, as the hours of daylight dwindle and the residents of Utqiagvik prepare for winter, the bowhead whales make their annual migration. Roughly 17,000 whales depart from northern Canada and travel west, along the northern shores of Alaska, before crossing the Chukchi Sea to Russia.

But not this year.

The fingerprints of climate change have been everywhere in Alaska. July was the state’s all-time hottest month; sea surface temperatures have been breaking records around Alaska’s coastline; and reports of salmon die-offs came in from across the state as river temperatures hit 70 degrees Fahrenheit.

At a time when the Arctic’s sea ice pack normally would be nearing the Alaska coastline, the ice pack is still 400 miles north of Utqiagvik. What little snow there is in Utqiagvik has been melting, with temperatures above freezing and five October days breaking or tying heat records.

“We just haven’t been seeing bowhead whales in October,” said Megan Ferguson, a research biologist with the National Oceanographic and Atmospheric Administration (NOAA). “It’s the big mystery: where are the bowheads?”

Since 1979, the federal government has flown planes over the area to track the bowheads’ migration and ensure that their population is bouncing back after it dwindled to around 3,000 at the end of commercial whaling in the early 1900s. Ferguson, the co-lead of that project, has been a part of the work since 2008.

“I don’t think we’ve seen a single bowhead whale in the Chukchi Sea this year, and that’s a total anomaly,” she said.

In Utqiagvik, where 63 percent of the population is Iñupiat Iñupiaq, many people rely on food they hunt and catch, and they count on the fall whale hunt to fill their ice cellars for the winter. “We depend on it as our greatest food source for the cold winters,” said Herman Ahsoak, a whaling captain and board member of the Barrow Whaling Captains Association.

“We’ve never seen something like this,” he said. If the whales don’t arrive soon, “we’re going to go hungry.”

It’s hard to understate the importance of bowhead whales to Alaska Natives. The massive bones of whales decorate houses. Artists carve stories into baleen, depicting encounters with polar bears or families out on the sea ice.

“When I eat muktuk and meat, it fills my mind, body and spirit,” said Ahsoak, referring to whale blubber, which is a delicacy of great cultural significance.

Utqiagvik whalers have a quota 25 whales a year, split between a hunt in the spring and one in the fall. The two hunts are dramatically different. In the spring, hunters hike out onto the sea ice and launch their boats from there. When they land a whale, the community comes together to haul it onto the ice and work quickly, together, to butcher it. As the sea ice conditions have become uncertain in recent years, that hunt has become complicated.

In the fall, hunters launch their boats from docks. This year’s hunt has been complicated by the lack of whales and a bout of bad weather, which has kept the hunters on the land for days at a time.

Now the daylight is disappearing and winter is coming. In a few weeks, polar night will begin, with the sun not coming up over the horizon for two months. Meanwhile, they’re still waiting, and answers to why the migration is so late this year are elusive.

“As each day progresses, it gets darker quicker,” said Ahsoak. “We’re pressed for time right now.”

Where Are the Whales?

There’s been a steady drumbeat of climate anomalies in Alaska in recent years, especially in the Bering Sea off Alaska’s west coast.

Heat waves in the Bering Sea over the past two years have eradicated a “cold pool” at the bottom of the ocean, which has major implications for the ecosystem. “Basically the whole Arctic part of the Bering Sea ecosystem has been replaced by the southern fish,” said Rick Thoman, a climatologist at the International Arctic Research Center at the University of Alaska Fairbanks.

Thoman documented changes across Alaska in a new report, “Alaska’s Changing Environment,” telling the story of wildfires, drought, dwindling sea ice, changes in species, thawing permafrost and more. The Alaska he documents is burning, melting and changing in unprecedented ways.

On the ground in Utqiagvik, Ahsoak said he missed the summer walrus hunt entirely because they migrated weeks earlier than expected.

The first surprise came in September—her team found the normal number of whales, but in a totally unexpected place.

Ferguson was on a NOAA plane, recording whale sightings on a map that shows the water depth below. “I’m flying along and I play this game with myself, where I expect to see them between the 25 meter isobath and the 50 meter isobath,” she said, referring to the depth of the water. But this year, they weren’t there. Instead, she found them in an area with a 200 meter depth.

“In all these years, that’s been beluga habitat,” she said. That’s when she started to get the feeling: “There’s something different going on here.”

October is when things got weird.

“We started hearing reports from the whalers out of Barrow saying they haven’t seen any whales,” said Ferguson, referring to the former name of Utqiagvik. “Usually by October 1 they’ve landed at least one whale. Now we’re at October 30 and they haven’t seen one.”

At a time when the whales should have been migrating in mass past Utqiagvik, instead hardly any were appearing in NOAA’s survey area, and those that did show up were much farther from shore.

Finally, on Oct. 29, there was a breakthrough: the team spotted about 30 bowheads near Prudhoe Bay heading west toward Utqiagvik. “We think we found the whales!” Ferguson said, her voice bursting with excitement. “They’re finally where we expected them to be on September 1. If this is the normal migration, it’s two months late.”

So What’s Going On?

There are a few theories about what’s going on with the whales.

One theory is that they had no reason to migrate yet. The whales’ departure from Canada is thought to be tied to their food source there, Ferguson said. Bowheads feed on copepods—tiny, space-alien looking creatures that are brought up from the bottom of the ocean by an upwelling caused by the wind.

“Usually, during mid to late September copepods enter a sedentary phase and settle on the bottom of the ocean,” she said. At that point, they’re no longer available to the whales for feeding. “It could be that this is just a booming year for food in Canada, and there’s no reason to leave.”

That doesn’t explain why the whales are so much farther from the shore, though. It may take some time to answer that one.

When the whales reach Utqiagvik, they have another food source: krill, which are brought north to Utqiagvik on currents through the Bering Sea. “If it’s a bad krill year or the current dynamics are different, then there’s not going to be that krill resource,” said Ferguson. “So they won’t stop and feed.”

That’s where climate change may come into play. With the dramatic temperature changes in the Bering Sea, it’s not yet known how the krill population may be impacted, Ferguson said, or what that could do to the bowheads.

It Utqiagvik, the whaling community is watching and waiting with growing anxiety. “If we don’t land any before Thanksgiving, we’re going to have quite a long winter,” said Ahsoak. 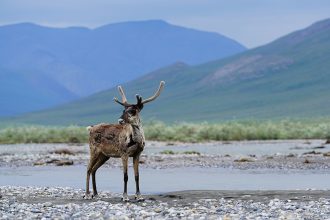