As the Coast Guard and Navy prepare to invest nearly $10 billion in new heavy polar icebreakers, the Government Accountability Office has found problems in key areas of the plan, which it warns could put the program at risk of failure.

In a report released Tuesday, the GAO said the Coast Guard “did not have a sound business case” and may have underestimated both the costs and the amount of time it would take to deliver the ships. Those shortcomings could pose significant risk to the program’s success and to the United States’ presence at the poles, considering the U.S. icebreaker fleet is already on borrowed time, with just one heavy polar icebreaker that is years past its projected lifespan.

The report could strike a blow at the progress being made toward acquiring new ships—a decades-long effort that is becoming increasingly important for both security and science as global temperatures rise.

Funding had seemed closer to succeeding than ever before. President Trump asked Congress for $750 million in the coming fiscal year to start the design and procurement of the new ships. But Congress hasn’t approved the spending yet. Among the competing priorities in the Homeland Security budget is the wall he wants along the U.S.-Mexico border.

The GAO report isn’t a death blow. But if the program is to be shoehorned into the budget, its costs will have to be kept under control.

“For those who understand the urgency and the national need for a heavy icebreaker, this will be seen as putting forward a very thoughtful argument, to make sure we’re doing best practices,” said Heather Conley, a senior vice president at the Center for Strategic and International Studies who focuses on the Arctic. “But for those who find these costs so extraordinary, they may want to slow down and keep reviewing the program—which is the reason we don’t have the icebreakers that we need.”

The Coast Guard currently has two icebreakers to fulfill its mission at the poles—the Polar Star, a heavy icebreaker built in 1976 with an expected 30-year lifespan, and the Healy, a medium icebreaker that entered service in 2000. A third icebreaker, the Polar Sea, has been out of commission since 2010, but has been used for parts to keep the Polar Star running.

“If we hold these new icebreakers up for a year or two for additional studies, it’s likely to increase the gap where there might not be a U.S. Coast Guard polar icebreaker available,” said Lawson Brigham, a former captain of the Polar Sea and Arctic researcher at the University of Alaska Fairbanks.

The icebreakers are critical to supporting U.S. interests at the poles. In Antarctica, the Polar Star helps ensure scientific stations can be accessed year-round and have the needed supplies. In the Arctic, both ships are used to support science and are available to support oil spill cleanup efforts, search-and-rescue operations in Alaska and enforcing marine laws related to fishing.

GAO’s 4 Areas of Concern about the New Plan

The Coast Guard and Navy, working jointly, have a plan to build three new heavy polar icebreakers, which will cost an estimated $9.8 billion over their lifetimes. According to the GAO, the plan falters in four key areas.

Design: The GAO found, essentially, that the Coast Guard put the cart before the horse, setting out program baselines before it had conducted a preliminary design review. While that is “consistent with DHS’s [Department of Homeland Security] current acquisition policy, it is inconsistent with acquisition based practices,” the GAO found.

Technology: Though the Coast Guard had indicated that it did not need to conduct a technology assessment because other ships have used the same technologies, the GAO found that applying those technologies to new programs or operational environments without a separate assessment could pose an operational risk.

Right now, the Coast Guard’s schedule calls for the awarding of a detail design contract next summer, putting the technology assessment on a tight timeline. Depending on the scope of the project, technology assessments can take a couple of months to a year to complete, and that would need to be done prior to awarding a contract, said Marie Mak, the director of contracting and national security acquisitions for the GAO.

Cost: The GAO found the Coast Guard’s $9.8 billion estimate for the lifetime costs of three ships mostly met best practices, but it fell short in one key area: “They didn’t do any sort of modeling to account for risks,” Mak said.

Schedule: Mak said that this shortcoming was the most significant. The Coast Guard’s estimated schedule for delivering the icebreakers has the first one being completed in 2023, the next in 2025 and the third in 2026, allowing for three years to construct each ship.

“When we looked at 10 recent ship-building programs, only three were constructed in three years or less, and those three were more basic ships,” Mak said. “They were either based on commercial designs or had commercial specifications. Given that we haven’t built a heavy polar icebreaker in 40 years, it screams optimism.”

Though the report cautions that these issues should be rectified prior to committing funds to build the ships, the GAO was not weighing in on what Congress should do. But it could offer an excuse to those in Congress who would rather push off funding the program.

“We have perfected the art of study to avoid taking difficult, high cost decisions,” said Conley, of CSIS. “If we fall back into that trap again, we are not going to be able to maintain access to the poles. That’s the bottom line here.” 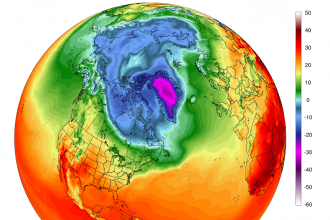