New York Mayor Michael Bloomberg’s last-minute endorsement of President Obama last week—released in an editorial titled “A Vote for a President to Lead on Climate Change“—wasn’t simply a big political event. It also raised the issue of climate change to a level that hadn’t been seen in the long presidential campaign.

Groups that have been monitoring the candidates’ positions on climate change say it’s unclear what impact Bloomberg’s statement—which said the devastation from superstorm Sandy “should be enough to compel all elected leaders to take immediate action”—will have on today’s election.

But it has drawn new attention to the differences between Obama and Republican challenger Mitt Romney.

“The president would continue to work on investing in clean energy, continue initiatives to reduce carbon pollution and pushing to end tax breaks of big oil,” said Jeff Gohringer, national press secretary for the League of Conservation Voters, a political advocacy organization dedicated to supporting pro-environment candidates. “If Mitt Romney becomes president he will be the first president ever to reject the scientific consensus surrounding climate change.

“So you can see the clear contrasts and what those respective politics hold for the country.”

“I think we’ve seen that President Obama is much more inclined to impose regulations that restrict carbon emissions than President Romney would,” said David Kreutzer of the Heritage Foundation, a conservative think tank that questions climate change. “Some of those things are already set in and will require quite a bit of effort to undo, but things going forward could be considerably different.”

Romney and Obama made only passing references to climate change during their convention speeches (Romney’s in the form of a joke) and the subject didn’t come up at all in their three debates for the first time in decades. But environmentalists and other election watchers say its emergence during the final two weeks of the campaign could force the winner of the presidential race to address climate change sooner rather than later.

“It seems that there’s a new awareness of this problem and the risks of climate change after Sandy,” said Kurt Davies, research director for Greenpeace. “We can only hope that it creates more attention in the policy arena and I think it will. … It’s given us a chance to actually talk to the candidates about this issue.”

Davies and other observers agree that no matter who wins, there’s likely to be little in the way of comprehensive legislation or policy. With Congress deadlocked on most issues and environmental legislation a no-go for years, they say most climate and energy policy will probably come from the White House.

If Obama wins a second term, environmentalists expect him to continue using his regulatory authority to make strides on addressing carbon and other emissions without Congressional approval. In Obama’s first term, the Environmental Protection Agency set the first greenhouse gas limits on new power plants, proposed the first national standard for mercury from coal facilities and bolstered fuel economy rules for passenger vehicles.

Under the stimulus package, he also steered billions of dollars into clean energy loans, grants and tax credits—which financed the construction of wind and solar farms, jump-started an electric vehicle battery industry and launched the smart grid.

“I would expect the administration to move forward largely in the same way, in making environmental protection one of its hallmarks,” said David Goldston, senior adviser to the Natural Resources Defense Council Action Fund.

“Should Obama win, it gives him a little more ability to move forward on his proposals on efficiency and clean energy that are not only good for the economy, but the environment,” said Cathy DuVall, national political director for the Sierra Club.

After Hurricane Sandy, she added, “the climate reasoning for it won’t be treated as a joke.”

The fact that the Obama administration has already started working on these issues sets the stage for swifter action, said Rob Sisson, president of the Republican group ConservAmerica.

“It will be a lot quicker for them to tee it up and move ahead,” said Sisson, whose group focuses on natural resource conservation. “This is an administration that has already laid the groundwork.

“With the national environmental and conservation movement in place, and with a growing appreciation for these issues by those in the center, a second administration will have the momentum to move forward.”

That’s not good news for groups on the right, who say EPA regulations have been hurting businesses and would like to see them scaled back. Kreutzer of the Heritage Foundation thinks Obama’s work on climate change has been “held in check” by Congress and Obama’s reelection bid.

“With no additional elections for him to face, I think we’ll see more aggressive work. And I don’t think we’ll see the Keystone XL pipeline,” Kreutzer said, referring to the pending decision on whether the controversial Canada-to-U.S. oil sands pipeline should be approved.

Environmental groups say it’s hard to predict what might happen under a Romney administration. While there’s general agreement that he would be less likely than Obama to push for regulatory action, his changing rhetoric on the trail and his pro-environment work as Massachusetts governor leave his future plans a question mark.

“To some degree, it’s anyone’s guess. He’s staked out some positions on a very extreme agenda … but on the other hand his rhetoric has become increasingly moderate,” said NRDC Action’s Goldston.

As a governor, Romney incorporated climate change mitigation into state policies and even helped push Massachusetts into the Regional Greenhouse Gas Initiative (RGGI) with other Northeast states. He later pulled Massachusetts out of RGGI, citing the program’s economic impact. (The state rejoined the pact under Gov. Deval Patrick.)

Since the start of the presidential campaign, however, Romney has hardened his talk on climate change, downplaying the human influence on global warming and arguing that environmental regulations have hurt businesses and worked against the market. At the Republican convention in Tampa, Romney drew laughter when he said, “President Obama promised to begin to slow the rise of the oceans and to heal the planet.” (That line was later repurposed into an anti-Romney ad from the advocacy group Forecast the Facts.)

But the aftermath of Sandy has softened Romney’s rhetoric, offering some hope, Goldston said.

“At least he went back to admitting that climate change is real. Now we just need to make sure he would do something,” Goldston said.

Other environmentalists aren’t so sure that Romney would act on climate change as president.

“With his election he’ll put oil back in the driver’s seat and put big corporations in the driver’s seat and put them in control of America energy future,” said Gohringer of the League of Conservation Voters. Gohringer estimates that 3 million jobs in the renewable energy industry could be at risk if Romney were elected and that protected lands could be offered up for development or oil and gas exploration.

“Romney, who had taken some very laudable steps as governor, reversed all of those positions … during the general election,” said Sierra Club’s DuVall. “That’s not necessarily because his beliefs have changed, but because of the sheer amount of [oil and gas] money coming in and the advisers that have influenced the campaign.”

But Sisson of ConservAmerica, which did not endorse a presidential candidate, said that because Romney is a “sharp business person,” he would do what some of the nation’s major corporations have already done and factor climate change into his policies. Still, Sisson added, “there will be a large number of things in line ahead of climate,” especially with the economy still reeling.

The Heritage Foundation’s Kreutzer said he expected Romney to act but “with less of a push into EPA and more of sort of legislative deal-making.”

Kenneth Green, a resident scholar at the American Enterprise Institute, a conservative think tank, said that could come in the form of a carbon tax as a replacement for EPA regulations, but only as part of a broader tax reform package from Congress.

Whichever way the election goes, the scars left by Hurricane Sandy will put pressure on the next president to address climate change, said Greenpeace’s Davies.

“There’s now a broader constituency than just the environmental movement,” Davies said. “There is a convergence of national security specialists with insurance companies, businesses, people who lost a lot in the storm and people who were pretty upset. There’s going to be a lot of pressure, far beyond the regular movement.” 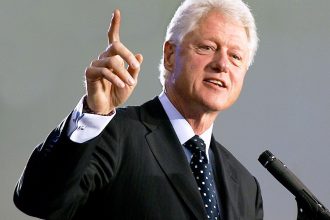