The Trump Administration announced major changes Monday to the way it will implement the Endangered Species Act, weakening protections for threatened species and critical habitat and making it harder to take future risks from climate change into account.

The act has been credited with keeping 99 percent of listed species from becoming extinct, including humpback whales and bald eagles.

The new changes aren’t a matter of just “nibbling at the edges” of the act, said California Attorney General Xavier Becerra, who is among those vowing to take legal action to stop the Trump administration from weakening the act.

The revisions weaken the Endangered Species Act in key ways. They make it harder to take climate change into account when deciding whether a species needs protection, and they limit protections for critical habitat. They also allow the agencies to consider economic interests when deciding whether to list a species—something that was explicitly forbidden in the past.

And they make it harder to list threatened species—those with populations that appear to be stable but which face risks from expected loss of habitat, like ice-dependent species or those susceptible to sea level rise.

Commerce Secretary Wilbur Ross said in a statement that the revisions “fit squarely within the President’s mandate of easing the regulatory burden on the American public, without sacrificing our species’ protection and recovery goals.”

The oil and gas industry, which has long argued that the Endangered Species Act restricts its ability to pursue natural resources by putting some areas off limits, would benefit from the revisions, and the American Petroleum Institute said it welcomed the Interior Department’s changes. The National Cattlemen’s Beef Association, whose president was with Interior Secretary David Bernhardt for the announcement, also applauded the move, calling it “regulatory relief.”

The revision to the act comes just months after a major United Nations report found that a million species are at risk of extinction, and that climate change is a key driver. In order to save ecosystems from collapse, the report called for “urgent and concerted efforts fostering transformative change.”

“It’s sad. It’s just so myopic,” said Thomas Lovejoy, a senior fellow at the United Nations Foundation who has studied biodiversity for 30 years. What’s frightening, he said, is that “it’s very easy to actually do a poor economic analysis, which basically sets it up so that the endangered species take it in the chin.”

What Will It Mean for the Arctic Wildlife Refuge?

Under the new application of the rule, a species can only be listed as threatened if its population is going to be affected in the “foreseeable future,” allowing decisionmakers in the Fish and Wildlife Service and NOAA to ignore long-term threats like climate change.

“These are code words for, ‘Don’t look too far into the future and don’t rely on models,’” said David Hayes, a former deputy secretary of the Interior who is now director of the State Impact Center, which works with state attorneys general to defend clean energy and climate policies.

“It’s the playbook that the anti-Endangered Species Act folks have been using to challenge species that are encountering climate problems,” he said.

One species that has benefitted from the protections due to projections of future impacts is the polar bear. The bears are listed as threatened due to their dependence on sea ice and because of the scientific consensus around the loss of that habitat as climate change progresses.

As a result of that listing, parts of the U.S. Arctic that are attractive to the oil and gas industry—including the Coastal Plain of the Arctic National Wildlife Refuge—have been listed as critical habitat.

Steven Amstrup, the chief scientist for Polar Bears International and a former career polar bear biologist with the U.S. Geological Survey, said he can see how the changes announced today could play out in the refuge.

“If critical habitat is somehow changed by this proposal, that might be easier for oil and gas development there to go forward,” he said. And if the economics are allowed to be taken into account, “people might make an argument that the short-term gain is valuable and not look at what the long-term costs of these things are.”

“We could see potentially oil and gas development on the Arctic National Wildlife Refuge, the possibility being enhanced by these actions,” he said. “And that would have long-lasting effects.”

The revisions to the act change the way that threatened species are protected. Until now, there has been a blanket set of protections that apply to species once they are listed under the act, unless an exemption was passed. The new changes turn that on its head—instead, now each species will be assessed individually by the Fish and Wildlife Service, allowing regulators to pick and choose protections.

How States Plan to Challenge the Revisions

Supporters of the Endangered Species Act plan to challenge the changes in court.

“We’re going to do everything we can to oppose these actions that put our local communities and our environment at risk,” said Massachusetts Attorney General Maura Healy.

Healy said she expects a group of attorneys general to argue that the changes were arbitrary and ignored scientific evidence; that they failed to review environmental impacts and didn’t account for the public comments, as required by the law; and that they violated the text and purposes of the Endangered Species Act.

“Gutting the Endangered Species Act sounds like the plan of a cartoon villain, not the work of the president of the United States,” Healy said.

Although the changes do not explicitly state an intention to remove climate considerations from decisions to list species or habitat, Becerra said the goal is obvious.

“It’s clear that these rules were drafted more by attorneys than by scientists,” he said. “They are trying to be a little too clever in attacking climate change.”

Hayes said the move by the Interior Department “fits into a pattern—an anti-wildlife pattern and anti-biodiversity pattern.”

“You had the reversal of decades of interpretation of the Migratory Bird Treaty Act. You have the re-do of the greater sage grouse protections that had been voluntarily entered into, so there can be more oil and gas drilling,” he said. “And they’re pushing hard for a final environmental impact statement so they can start oil drilling in the Arctic National Wildlife Refuge. This is part of a pattern.” 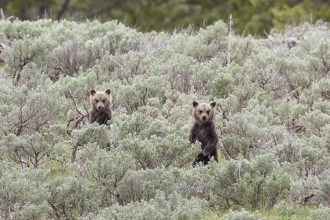