Updated Aug. 5, 2019, with Yellowstone-area grizzly bears being relisted as a threatened species.

LIVINGSTON, Montana — Wally MacFarlane calls them ghost forests. You can tell they didn’t burn because the needles are still intact, the branches flawless except for the gray where there used to be green. When MacFarlane flew over Yellowstone National Park and its surrounding area 10 years ago, the forests were a sea of red, hundreds of thousands of acres lit up by mountain pine beetle infestations, the magnitude of death only visible from above.

“The level of destruction is hard to even fathom until you take people up to see it,” said MacFarlane, a senior research associate at Utah State University who conducted aerial surveys of whitebark pine trees in the region in 2009 and again in 2018. “It’s the deforestation of this ancient forest, arguably something in the order of one of the greatest losses of old-growth forests in the United States, in just the scale.”

Over the past 200 years, these forests provided a last refuge for grizzly bears in the contiguous U.S. from the westward expansion of towns, farms and ranches. In the high-altitude forests, the bears could rely on squirrels’ caches of whitebark pine seeds as an abundant and important food source.

Today, the Greater Yellowstone Ecosystem is one of just two places—along with Glacier National Park—where large populations of grizzly bears can be found in the Lower 48.

But those dying forests signaled trouble for Yellowstone’s grizzly bears and their already diminishing food supply.

As warmer winters allowed the beetles to spread and devastate the whitebark pines, the bears have been increasingly wandering out of the Greater Yellowstone Ecosystem’s high-altitude forests and into more human environments, and they are dying in greater numbers than they have in decades, federal data show.

Government officials say the population is stable. But over the past four years, the number of grizzly bear deaths has risen, the majority of them because the bears became a threat to people or livestock and were euthanized. Almost 250 bears have died over that period in the ecosystem, a swath of land larger than the state of West Virginia that comprises parts of Wyoming, Montana and Idaho.

Grizzly bear researchers and advocates fear the higher number of annual deaths may be putting into doubt the future in the region of one of the slowest reproducing terrestrial mammals.

“I think it’s serious,” said Barrie Gilbert, a retired biologist who spent more than 40 years studying bears. If more bears die than are born, the population will be in trouble, he said. A new international report warns that worldwide, human activities, including those that drive climate change, have put 1 million species of animals and plants on the brink of survival.

The Greater Yellowstone Ecosystem has long provided an island of habitat for grizzly bears, but the quality of that habitat has been declining. Cutthroat trout and elk that the grizzlies relied on dwindled. Then the whitebark pine seeds began to disappear.

MacFarlane said there is a clear connection between warming temperatures and the death of whitebark pine trees.

Extreme cold used to kill mountain pine beetles, but with a warmer climate, the beetles were able to survive the winter, allowing them to kill whitebark pine trees at high rates. Federal scientists last year estimated that an average of 76 percent of the whitebark pines had died since 2002 in the areas of the ecosystem that they regularly survey. Blister rust, caused by an invasive fungi, has also been harming the trees, and drought adds stress.

“The beetles are driven just by temperature in what they can do as far as damage,” MacFarlane said. “It’s the canary in the coal mine. It’s laid out. It’s hard to dispute. It’s climate-driven.”

A 2018 federal report acknowledged the impact the diminished food supply can have in raising the death toll for the bears: “Historically, grizzly bear-human conflicts and management actions were reduced during years with good food production, including whitebark pine. In areas with widespread whitebark pine mortality, this effect may now be diminishing.”

As grizzly bears wander farther in search of food, they are increasingly encountering humans—drivers, hunters, ranchers—and winding up dead.

More bears died in 2018 in the Greater Yellowstone Ecosystem than in any other year in at least four decades, according to the Interagency Grizzly Bear Study Team. Last year’s 69 deaths more than doubled the average in the decade from 2000 to 2010, when about 27 bear deaths were reported each year.

The Interagency Grizzly Bear Study Team records “known” and “probable” deaths: known deaths are confirmed, while probable deaths include things like the loss of a radio collar signal and cubs whose mother was killed.

The majority of those deaths came at the hands of state wildlife agencies last year, which euthanized at least 38 bears in 2018 for behavior that included frequenting houses and campgrounds and preying on livestock. Once a bear becomes habituated to humans, it can be considered a threat to public safety, and state and federal officials decide whether to relocate or kill it.

The Risk Was Becoming Clear Back in the 1980s

Biologist David Mattson, who was a member of the Interagency Grizzly Bear Study Team for two decades and continues to research grizzly bears, predicted in papers published in 1986 and 1991 that a warming climate would lead to the decline of the whitebark pine and problems for grizzly bears.

“We were flagging climate change as early as that,” Mattson said. “We didn’t know exactly how because the mechanisms were up in the air, but it’s been out there for a long time.”

In the Yellowstone area, the loss of whitebark pine followed the decline of other grizzly bear food sources.

The cutthroat trout population has been decimated by disease and non-native lake trout, which are outcompeting the native species. Plus, the streams where they used to spawn have seen lower water levels because of a declining snowpack.

Populations of elk, another main food source for grizzlies, have plummeted over the past 25 years in Yellowstone National Park herds. In 1994, there were more than 19,000 elk in the Yellowstone herds. In 2018, that number was just above 7,500.

Jesse Logan, a retired biologist with the U.S. Forest Service who helped document the loss of whitebark pine, said this confluence of factors means Yellowstone can’t support as many bears.

“The bears are adjusting by moving out into areas with high-quality food resources, primarily meat or other things to replace foods,” Logan said. “These range expansions are to replace what had been a higher-quality habitat, but is now a lower-quality habitat.”

Can This Grizzly Population Remain Sustainable?

The grizzly population grew during the decades after 1975, when the bears were listed as “threatened” under the Endangered Species Act. At the time, as few as 136 grizzly bears were in the Greater Yellowstone Ecosystem. The population rose to about 700 over time, but then leveled off.

In 2017, the U.S. Fish and Wildlife Service removed the grizzlies’ federal protections in the Greater Yellowstone Ecosystem, arguing that the increasing movement of bears outside the Demographic Monitoring Area (DMA)—a swath of land set aside for recovery of bears—showed the landscape had reached its carrying capacity. But a judge in 2018 ordered those federal protections restored, saying that the service didn’t consider recovery of species beyond Yellowstone in the ruling and that the service’s analysis of the threats facing Yellowstone grizzlies was “arbitrary and capricious.”

[Update: The U.S. Fish and Wildlife Service, citing that 2018 ruling, officially relisted the Yellowstone grizzlies as “threatened” under the Endangered Species Act on July 31, 2019.]

Despite the higher number of deaths in recent years, state and federal wildlife officials say they are not concerned about the long-term viability of the grizzly bear population.

Estimating the grizzly bear population is a complicated and imprecise process. The Interagency Grizzly Bear Study Team, which oversees grizzly bear recovery for the U.S. Fish and Wildlife Service, conducts surveys on the ground and by air and counts the number of females with cubs in the DMA to estimate the wider population. The annual margin of error is about 10 percent.

But Mattson, MacFarlane and other scientists worry about the rising number of deaths in recent years.

“We can’t continue to have years of record mortality without seeing some long-term problematic consequences,” said Louisa Willcox, an advocate for grizzly bears at NRDC and the Sierra Club for more than 30 years. “If we keep it up, there’s only one probable way their population levels go, which is down.”

Earlier this year, a group of conservation groups, including the Sierra Club, NRDC and the Humane Society, asked the Interagency Grizzly Bear Committee’s Yellowstone Ecosystem Subcommittee, a group of government agencies tasked with managing the area, to take a look at grizzly deaths and implement strategies for reducing human-wildlife conflict, including electric fencing, education of hunters and public outreach.

“Almost all the grizzly bear deaths every year are somehow related to human causes,” said Andrea Santarsiere, an attorney for the Center for Biological Diversity, who also signed the letter.

That landscape is also changing for grizzlies to the north. Scientists in Canada are watching shifts in another grizzly bear food source: buffaloberry. The bears in Alberta’s Rocky Mountains typically gorge on the late-summer berries as they gain weight ahead of their winter hibernation.

But as summer temperatures rise, the berries are projected to ripen earlier—as much as three weeks earlier by 2080, according to a study published in April. The scientists who led the study warn that that shift could affect the bears’ reproduction as well as their ability to find food without wandering farther from their usual homes—just as the U.S. scientists are seeing around Yellowstone.

“We can’t expect the landscape there to be the same as it was 1,000 years ago,” said Dan Thompson, large carnivore section supervisor for the Wyoming Fish and Game Department.

He said he doesn’t like having to euthanize bears that wander out of the Yellowstone forests, but he said bears getting habituated on human food and livestock isn’t good for anyone.

“I’d be happy if we never had to catch another bear for conflict in the future,” he said. 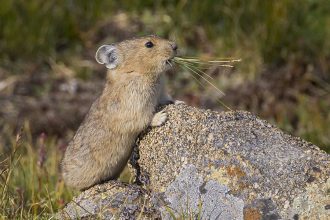 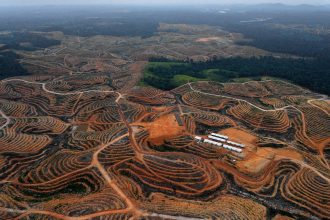