For more than a decade, companies that wanted to buy wind and solar power got to enjoy the fact that the prices for renewable energy got cheaper almost every year.

Then, prices began to rise in some places, with the trend becoming clear by the end of 2020. It was easy to dismiss this as a mere blip due to economic disruption caused by the pandemic.

But prices continued to increase in 2021, and I’m wondering how long this is going to last.

“We’re in particularly weird times,” said Ben Serrurier, a manager in the carbon-free electricity practice at RMI, the research and advocacy group.

He said price increases aren’t surprising, considering the high demand for renewable energy and the many challenges that developers are facing in trying to build projects to generate it.

The prices reflect rising costs and high levels of uncertainty for the wind and solar developers offering the contracts, said Rob Collier, vice president of developer solutions for LevelTen Energy, a Seattle company that runs an online marketplace for buyers and sellers of renewable energy.

“What we’re seeing in the market is a huge surge in demand” for wind and solar from buyers, he said. “At the same time we’re seeing a shortfall of viable projects to meet that demand.”

Prices being offered by developers selling U.S. wind and solar contracts rose 15.7 percent in 2021 compared to the prior year, reaching $36.30 per megawatt-hour, according to the P25 index produced by LevelTen, released this month as part of the company’s quarterly report on national and regional price trends.

Wind and solar projects are facing delays because of shortages of raw materials, bottlenecks in international shipping and a backlog of applications for grid connections with regional grid operators, the report said.

Developers also are having to deal with more challenges to their obtaining state and local building permits, sometimes in the form of counties passing ordinances restricting new projects. Indiana is one of the places this is happening, with county ordinances that restrict projects being adopted in large swaths of the state, as I reported last year.

Federal policy is another factor. In 2018, the Trump administration imposed tariffs on imported solar cells and panels, and the U.S. International Trade Commission is recommending that the Biden administration extend the tariffs for an additional four years.

Some of the causes of the price increases could go on for a while. A good example is the grid operators’ backlog, which could take years to resolve in some parts of the country.

But Collier sees a hopeful story as well, which is that demand for wind and solar remains strong, even with higher prices. For example, the Clean Energy Buyers Association, a group of corporate giants like Amazon and Google, made agreements to buy 7.88 gigawatts of renewable energy capacity in the first three quarters of 2021, which was on pace to match the record of 10.63 gigawatts from 2020.

Another leading source of price data for wind and solar is the Lawrence Berkeley National Laboratory, which showed in its most recent reports that wind and solar contract prices had leveled off after years of declines and were rising in some places.

Recent price increases are jarring considering that, from 2009 to 2021, the average price of U.S. solar power contracts fell by about 15 percent per year, according to the lab’s data. Wind power contract prices also had steadily fallen between 2009 and 2018, with the exception of an increase in 2015.

Prices fell during the 2010s largely because manufacturers found ways to cut costs through economies of scale, which led to less expensive wind and solar components. At the same time, developers gained their own economies of scale by building larger projects, among other factors. The result was lower prices.

Those years cover almost my entire time covering the business of energy, a period when the decreasing prices of wind and solar fueled the idea that a transition to clean energy could be done affordably.

I also learned not to overreact to short-term price changes, which is useful in times like these.

How long will this last? I asked the experts.

“I think, at least for the next couple quarters, we’ll be in the same state of the world where we are now, and we won’t see major (price) declines,” Collier said.

Serrurier was reluctant to predict what’s ahead for pricing, but he did feel confident that the market remains strong.

“It’s still a growth market and growth markets can have dislocations in bringing supplies online, even in normal times,” he said.

Sale of North Dakota’s Largest Coal Plant Now Includes Plans for a Wind Farm: Great River Energy of Minnesota is asking the rural electric co-ops that it serves to approve a revised contract to sell Coal Creek Station, the largest coal-fired power plant in North Dakota. As I reported last week, the new contract includes plans for a 400-megawatt wind farm. The coal plant’s buyer is going to allow Great River to use an interstate power line that is also part of the deal to deliver wind energy from the planned wind farm, a significant addition to the sale agreement that Great River is praising. Great River provided details on the wind farm this week, with an announcement that Apex Clean Energy is the developer of a project to be located in McClean County, the same county as the coal plant. The wind farm would be the largest in the state, as Amy Sisk reports for The Bismarck Tribune. County officials had passed rules to limit wind farm development, but officials are now saying they are willing to revise the rules to allow the wind farm because the development is part of a larger agreement that would keep the coal plant operating.

War Between Energy Titans Could Shape New England Climate: NextEra Energy and Avangrid Inc., two of the world’s largest energy companies, have been locked in a battle over which electricity resources will gain the upper hand in New England’s electricity grid. NextEra has been trying to get a contract to help solidify the finances of its Seabrook nuclear power plant in New Hampshire while Avangrid has been trying to build a grid connection between New England and Quebec that would increase the flow of low-cost hydropower from Canada. The companies have taken steps to hinder each other’s efforts, even though analysts say that New England needs all the carbon-free electricity it can get, as Ben Storrow reports for E&E News.

Schwarzenegger Doesn’t Like California Net Metering Proposal: Former California Gov. Arnold Schwarzenegger is the latest in a large cast of characters stepping forward to criticize the California Public Utilities Commission’s proposal to increase costs for owners of rooftop solar. “Now California is about to take a big step backward by setting up huge barriers for consumers to adopt solar power,” he wrote in an opinion piece in The New York Times. “Installing panels on roofs is one of the fastest ways to produce renewable energy. They can be installed without complicated permitting or land fights, and they produce immediate reductions in dirty and dangerous emissions.”

Lake Erie Offshore Wind Project Gets More Time to Arrange Financing: Developers of the Icebreaker offshore wind farm near Cleveland have been given an extension on a federal grant to help pay for construction, staving off a potentially devastating setback. The extension gives the project more time to arrange financing and to try to resolve a legal challenge before the Ohio Supreme Court, as Peter Krouse reports for Cleveland.com. The project, which has been in the works for years, would be the first freshwater offshore wind project in the United States. 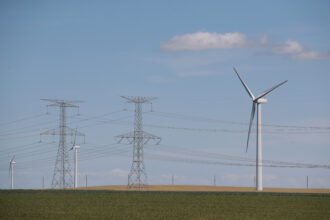