During the century in which the Winter Olympics have been held, 21 cities in Europe, Asia and North America have hosted skiers, snowboarders, hockey players, figure skaters, lugers, curlers and bobsledders. But if climate-warming emissions continue to rise on their current trajectory, all but one of these cities would become unsuitable for the games by the end of the century.

A study led by researchers at the University of Waterloo in Canada surveyed 339 elite athletes and coaches to determine what conditions made the Winter Olympic Games fair and safe for athletes competing outdoors, away from the shelter of climate-controlled arenas. They determined four conditions that indicate whether a location is suitable: snow cover, rain, snow wetness and temperature.

“It’s a bit disappointing to see,” said lead author Daniel Scott, a professor at the University of Waterloo, “that this could be possibly the future for some of these places we think of as traditional, and where the sports began in the Olympics may not be able to host the games in the future for climatic reasons, not politics or economics.”

However, if emissions quickly decline, about half of the past host cities would be able to reliably host the games by the 2080s, the researchers found.

“If we’re able to achieve the Paris Climate Agreement and achieve a low emissions future, which we all want to do for so many reasons,” Scott said, “that largely preserves the cultural heritage that we have in the Winter Olympics.”

A new doomsday novel explores a near future where climate change has driven a mass migration away from hurricanes and rising seas on the East Coast and raging wildfires in the West. The main character, Elon, has been wandering in the Midwest, and has lost virtually all faith in humanity, blaming the climate deniers, politicians and even himself for not doing more.

In his wandering, Elon stumbles upon a shelter where he connects with several other migrants. In their misery, they decide to share stories over the bonfire each night to escape from their realities. Released this month, the novel, Though the Earth Gives Way, was written by Pulitzer Prize-winning journalist Mark S. Johnson, who currently works as a health and science reporter at the Milwaukee Journal Sentinel.

Inside Climate News recently discussed the book with Johnson. This conversation has been lightly edited for length and clarity.

Your book is set in 2028 and the world has descended into chaos after a number of climate catastrophes. There’s no electricity, no internet, no law and order. How much of this is based in fact and how much is your imagination?

Most of it I came up with in my imagination, but I kind of looked at it this way. We haven’t had a lot of instances of panic on that level. Probably none. I think one of the strengths of fiction is that you can drag readers into the unthinkable, places we’ve never been. Thank God.

The characters in the story share compelling and sometimes heartbreaking stories about themselves or people they knew to entertain and captivate one another to distract from their own hardships. Why do your characters find comfort in these stories?

One of the things that you learn, being a reporter, is that after a while you realize that even the people that tell you, “Oh, there’s nothing interesting about me,” if you talk to them for a day you will find a very good story.

What do you think is the role of fiction in the climate conversation?

I think it’s effective because some very difficult issues, they’re hugely important, but it’s hard in nonfiction to get people to care, to get people to really see the human face. With climate change there’s some good reasons for it. Part of it is that the true worst disasters haven’t happened yet. And the disasters that have been happening for many years, places where they’ve had terrible droughts and thousands of people die, unfortunately to a lot of Americans, those stories feel distant.

And we’ve even gotten to the point where a lot of people reassure themselves when it comes to climate change by saying, “Well, that’s a problem if you live in Florida,” or you know, “Yeah, I mean, that’s why I would never go to California because they got the wildfires, and as long as I live here in my cozy place in the Midwest, I’ll be fine.”

Swapping a Serving to Cool the Climate

Swapping just one daily serving of beef or another high impact food for a similar but more sustainable option could reduce the planetary impact of our diets by 48 percent, a new study found.

Researchers at Tulane University and other institutions looked at survey data from 16,000 Americans who reported everything they ate in a 24-hour period. The researchers calculated two metrics for the food items in the reported diets—their water scarcity footprint, which takes into account how much water was used to irrigate and produce the product, and the greenhouse gas emissions associated with them. Then they estimated how substituting lower impact options for some food items would change these two metrics. Substitutions included swapping out beef with chicken or pork, asparagus with peas and dairy milk with soy milk.

The goal of the study, which was published this month in the American Journal of Clinical Nutrition, was to find out what impact simple swaps had on the environment, which consumers may be more willing to do than changing their entire diet, said Diego Rose, a professor of nutrition and food security at Tulane. The key was coming up with substitutions that were “culinarily equivalent,” he said. “This term we use … was basically to convey the idea that the substituted food is similar to the original in how it’s cooked or eaten.”

Just 20 percent of survey respondents reported eating beef in the 24-hour period, but it was by far the most impactful item that people ate. Beef production results in about eight to 10 times more greenhouse gas emissions than chicken, according to the study.

“I think the more we talk about this, the more it becomes commonplace to think about, ‘OK, I’m not going to just switch to chicken because it’s healthier for me, which is a good enough reason in itself, but I’m going to do it because it’s also healthier for the planet,” Rose said. “The more we have those kinds of conversations, the more people normalize the behavior of choosing for the environment.”

The famous park that sees 42 million visitors annually is not alone—the 1 million acres of parkland in the U.S. will experience a long list of extreme weather events as the planet warms.

A new collaboration between three organizations seeks to understand not only how climate change is affecting parks, beginning with Central Park, but also how parks can be natural infrastructure to help mitigate and adapt to climate change in the years to come.

Parks offer green spaces that help cool cities and reduce the urban heat island effect (the phenomenon where concrete surfaces and dark colored buildings absorb heat and create a warmer environment than the surrounding landscape). That can reduce the demand for energy to power fans and air conditioners during heat waves. Parks also offer a refuge for people to enjoy the cool shade of a tree or a refreshing breeze from a lake.

“If you look at the effects of parks on climate change, it’s one of the few things where investments actually affect both mitigation and adaptation,” said Karen Seto, a professor of geography and urbanization science at the Yale School of the Environment. “So it’s like a triple, quadruple win all the way around. It’s good for resilience. It’s good for adaptation. It’s good for communities.”

The goal is to create a common way of mapping park land in the context of climate change to apply to other parks around the country.

“We know that urban parks can be really places of respite for people,” said Clara Pregitzer, deputy director of conservation science for the Natural Areas Conservancy. “This I think really came through during the Covid-19 pandemic, where city residents were without personal backyards or green spaces, and really seeking respite and places to congregate, take a walk, experience nature and sit in the shade on hot days.”

In some pockets of the world’s oceans, oxygen levels are so incredibly low that the few organisms that can survive in them can’t simply breathe in oxygen and breathe out carbon dioxide. They rely on unique chemical processes to meet their energy needs.

These areas are called oxygen deficient zones, and they’re not easy to study. Located hundreds or even thousands of feet below the surface of the sea, the organisms that live there metabolize nitrate, releasing nitrogen gas as a byproduct. Nitrate is a form of nitrogen that fertilizes marine plants, powering photosynthesis and increasing sequestration of carbon in the oceans. But marine plants can’t easily utilize nitrogen gas, hindering photosynthesis and reducing carbon sequestration.

“The fertility of the ocean (just how much carbon it can sequester) is related to the size of the oxygen deficient zones,” said Andrew Babbin, an assistant professor at the Massachusetts Institute of Technology’s Department of Earth, Atmospheric and Planetary Sciences. “The bigger they are, the more nitrogen fertilizer loss and thus the less capable the ocean is of sequestering carbon dioxide.”

Babbin and his student Jarek Kwiecinski recently created an atlas of these oxygen deficient zones using 15 million data measurements taken over 40 years. The atlas will help scientists monitor how much carbon the oceans can hold—an important metric for understanding climate change.

Babbin said he hopes the atlas can serve as a basis to understand how these zones change from here, such as whether warming ocean waters make these zones bigger or smaller.

“It kind of acts as a point of comparison against future work,” he said.

Warming Trends: Climate Threats to Bears, Bugs and Bees, Plus a Giant Kite and an ER Surge 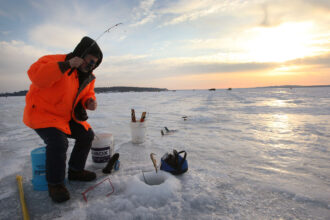 Warming Trends: A Potential Decline in Farmed Fish, Less Ice on Minnesota Lakes and a ‘Black Box’ for the Planet