The record-breaking heat wave last week in East Antarctica, the coldest region on Earth, saw temperatures surge as much as 85 degrees Fahrenheit above average, bringing readings near freezing and unexpected surface melting instead of the usual sub-zero conditions.

The heat wave adds to a quickly growing list of previously “unthinkable” climate events, and puts an exclamation point on an Austral summer that included brutal heat waves and record-high intensity wildfires in Argentina and Chile and flooding caused by record-setting rains in eastern Australia that killed more than 20 people and left thousands homeless.

Other “unthinkable” extremes hit the Northern Hemisphere in the months before that. A December wildfire in the Rocky Mountain foothills of Colorado completely changed how some forest and fire scientists see the fire risk in that area, and the Pacific Northwest heat wave that started in June 2021 was an extreme not forecast by climate models. As that heat wave ebbed in July, parts of several German towns were destroyed by flooding rainstorms that were intensified by global warming. And in recent days, temperatures surged to 50 degrees Fahrenheit in the Siberian Arctic near the North Pole and above the adjacent Arctic Ocean.

Scientists exploring possible connections between the remarkable series of extremes in both hemispheres say they are increasingly certain that the powerful El Niño-La Niña cycle in the Pacific Ocean is one of the key links. New research shows the cycle has shifted in a way that is likely to fuel extremes, including wild swings between heat and drought and flooding rains.

In the El Niño/Southern Oscillation (ENSO), huge masses of water surge eastward and westward every two to seven years along a vast region of the equatorial Pacific. One of the strongest El Niños on record in 2016 helped boost the average global temperature to a new record high that year.

The most recent global science report from the Intergovernmental Panel on Climate Change projected that the global warming fingerprint on the El Niño-La Niña cycle would become apparent after about 2050. But the accelerating pace of record-breaking weather events shows that the destructive effects are already here, said Wenju Cai, director of the Center for Southern Hemisphere Oceans Research at the Commonwealth Scientific and Industrial Research Organisation in Australia.

Cai was a co-author on a key 2022 study showing that the western Pacific is warming more than the eastern Pacific and that the growing temperature contrast is driving complex changes to the El Niño cycle, but Cai said some key climate signals are emerging, including enhanced rainfall in the areas favored by the respective phases of the cycle. And along with the background global warming, each major El Niño peak since the 1950s has been stronger than the previous, pushing ocean surface temperatures to new highs in the east-central equatorial Pacific, where important climate measurements are made.

“Anything that happens in the tropics affects both the northern and southern hemisphere,” Cai said, adding that, as the El Niño/Southern Oscillation changes, the affected areas are expanding and the extremes are intensifying and lasting longer in both hemispheres.

How global warming changes the El Niño cycle is a “fundamental issue in climate science with critical societal ramifications” because the cycle is so important to driving climate extremes “within and outside the Pacific,” Cai and his co-authors wrote in the study, published in January in Nature Climate Change.

There is not yet a discernible direct link between the current La Niña phase of the cycle and the recent heat wave in the Antarctic: Researchers have not even begun to explore a connection. But the southern polar extreme happened just days after scientists announced the finding that Antarctic sea ice had plummeted to the lowest extent on record, leaving miles of open ocean that’s darker and warmer than a reflective ice shield. And recent research suggests that the El Niño cycle affects Antarctic ice shelves, with more melting from below in their floating sections, but also with increased snowfall on the surface that can thicken the ice.

The warm air streaming from the direction of Australia over East Antarctica also dumped record amounts of rain and snow, adding 65 gigatons of mass to the ice sheet in three days (March 16 to 18), said University of Liege polar researcher Xavier Fettweis.

“Usually, the climate of Antarctica is too cold to have significant accumulation of snow, and most of liquid water from melt or rainfall is absorbed by the snowpack and refreezes,” he said. Under very warm and wet air mass that moved over Antarctica “the ice sheet gained 69 gigatons in three days, three times the usual surface mass gain rate.”

During the El Niño phase of the cycle, warmer than average water sloshes toward the eastern equatorial Pacific, often spurring intense winter precipitation along the West Coast of North America and North America, with relatively cooler water in the western Pacific—conditions that contributed to the 2019-2020 Black Summer fires in Australia.

When the cycle flips to La Niña, as in the last couple of years, the eastern and central equatorial Pacific cool, and parts of the eastern Pacific, known as the ocean warm pool, heats up even more, with broad climate patterns favoring extremes like Australia’s March floods and drought in the southwestern United States.

Oceans hold 93 percent of the heat trapped by greenhouse gasses, and the tropical Pacific is the biggest tank for this heat, pure energy for the climate system. The El Niño-La Niña cycle is the pump distributing that energy, as heat and moisture, to the global climate system, to the east and west of the equator, as well as the north and south.

Matt England, who studies climate extremes at the University of New South Wales, said that even a decade ago he would not have expected to see impacts from the intensification of La Niña—like the March flooding in Australia—to show up so soon. But it’s not surprising that the effects are being felt in both hemispheres, he said.

“The ENSO cycle definitely involves large-scale reorganization of the global atmosphere, across both hemispheres, north and south, but also east and west,” England said, “It is one of the primary drivers of these climate extremes we’ve been seeing, the classic signature being floods and drought and fire,” shifting between the Americas and Indonesia, Australia and other western Pacific nations, depending on the phase of the cycle,” he added.

The north-south influence of a changing El Niño/Southern Oscillation cycle is harder to see, he said, “because ENSO is mainly about pushing water back-and-forth in an east and west sense along the tropical Pacific.”

Along with the east-west ocean shifts, ENSO generates huge areas of convective moist air that rise and shift around, almost like bubbles in a lava lamp. They’re big enough to push around wind belts that carry seasonal rain and snow storms and warm and moist enough to give those storms an extra kick, he said.

In one example of how the effects ripple globally in both hemispheres, the United States Agency for International Development (USAID), an independent U.S. government agency that delivers international aid, reported last month that La Niña and climate change are causing exceptional drought in East Africa,

England said that the effect on Antarctic sea ice is complex, and he noted that long-term climate records from the remote region are few and far between. But it appears that La Niña phases lead to a lower extent of sea ice. Stronger La Niñas could mean more years of record-low Antarctic sea ice, and every time that happens, the ocean warms a bit more, making it harder for the sea ice to form again the following winter, he added.

His advice: Hang on tight for the climate roller coaster ahead.

“Earth’s climate has ways of reorganizing itself in rapid and highly nonlinear ways and El Niño is part of that,” he said. “What concerns climate scientists is that these are not always small and gradual shifts.” 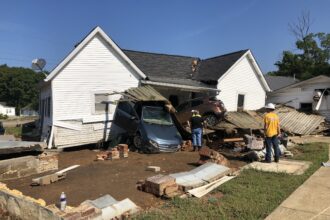 Battered and Flooded by Increasingly Severe Weather, Kentucky and Tennessee Have a Big Difference in Forecasting 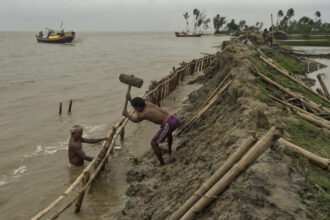