ExxonMobil has elected to its board of directors a prominent expert in atmospheric science, a move that some see as a sign the company is beginning to increase climate change considerations in its business plan.

The company’s announcement of the election of Susan K. Avery on Wednesday came against the backdrop of mounting shareholder pressure to seat a board member with a scientific background, as well as the recent departure of Rex Tillerson as Exxon’s chief executive. It may also be an indication of how criticism of Exxon’s stance on climate science is affecting the company.

But Exxon’s harshest critics dismissed the move as an empty PR gesture.

Avery served as president and director of the Woods Hole Oceanographic Institution from 2008 to 2015, and was the first woman and the first atmospheric scientist to hold the position.

“Avery’s leadership experience in multiple academic and scientific organizations, coupled with her breadth of scientific and research expertise, reinforce the corporation’s long-standing technical and scientific foundation,” according to an Exxon news release.

Avery has served on the United Nations Secretary General’s scientific advisory board, which provides advice on science, technology and innovation for sustainable development. She also had been associated with the National Research Council Global Change Research Program Advisory Committee, and advisory committees with NASA, NOAA, and the National Science Foundation.

Over the last two years, Exxon has opposed shareholder resolutions calling for a board member with a scientific and climate change background.  The company had urged shareholders to reject the proposals under the leadership of Tillerson, who is poised to be confirmed as secretary of state as soon as next week.

The company argued that its directors should have a “breadth of experience” and not be limited in their scope of expertise.

Although the resolutions received support of just 21 percent of investors in 2105 and 2016, a number of large shareholder organizations have thrown their weight behind them, including CalPERS, which manages California’s public employees retirement fund, and State Street Global Advisors, a worldwide investment management company. A similar resolution is up for consideration at the company’s annual meeting later this year.

Rev. Mike Crosby and the Province of St. Joseph of the Capuchin Order of friars had championed the resolutions. Crosby said Avery’s selection is a sign the company may be more willing to begin accepting the mainstream understanding that climate change is not only happening but will impact the world’s consumption of fossil fuels.

“It looks like they (Exxon) are changing their position,” he said.  “This is a step in what we see as a gradual evolution by Exxon.”

Crosby said the company initially refused to even talk when the friars first raised the issue several years ago.

“We weren’t getting anywhere with them,” he said. “But they have been evolving. The last time we brought it up with them, they seemed more willing to talk.”

“This is terribly important symbolically; terribly significant for company governance,” he said.  “We don’t know that this is a big shift.”

It increases the company’s competence in addressing the climate issue, he said.

“This should enrich the climate discussion by the company and hopefully make the company more accountable for the impact of climate.”

But the move is being viewed with cynicism by some environmental organizations.

“This is a little late in the game considering Exxon has known about climate change since the 1970s,” said Jamie Henn, spokesman for 350.org.

“It’s hard to believe this is little more than a PR stunt meant to pave over the decades the company spent deceiving the public about the crisis.” 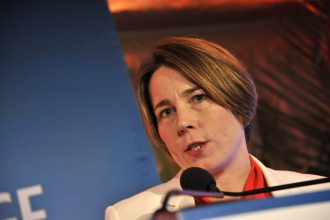 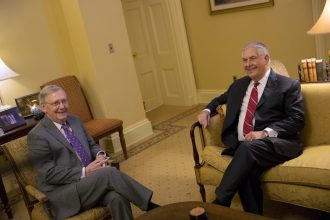