American Electric Power last week abandoned its plan to build the largest wind farm in the United States, a victim of a complex mix of political, regulatory and market challenges.

Its demise, while a big deal in the world of wind energy, probably doesn’t signal trouble ahead for the wind industry at large, which is thriving, analysts said.

“Just in general, it’s very difficult to get multiple regulatory jurisdictions to come to a conclusion and continue to have the economics make sense,” said Andrew Bischof, an analyst who covers utilities for Morningstar. Wind Catcher needed regulatory approval required from Texas and three other states: Arkansas and Louisiana, which gave it the green light, and Oklahoma, which had not yet decided.

Texas is the country’s wind energy leader, but it seems to be increasingly skeptical of renewable energy, said David Spence, a professor of law, politics and regulation at the University of Texas at Austin.

“Up until recently, the general zeitgeist here has been we’ve been really proud that we’re a big hub for wind,” he said. “That’s how (former Gov.) Rick Perry was until he got involved in national GOP politics.”

Most of the state is on its own grid and has deregulated its electricity market, meaning regulators would not have a say in this type of decision. However, the AEP project serves two small parts of Texas that are in the much larger Southwest Power Pool grid, which runs from the South up through parts of the Midwest, and those parts of the state have traditional utility regulation, giving officials the power to accept or reject the plan.

Before voting it down, Texas commission members devoted much of their debate on questions about whether Wind Catcher would deliver the promised cost savings to consumers.

Much of this argument came down to a review of recent forecasts that low natural gas prices are here to stay. Wind Catcher’s opponents seized on this, and regulators seemed to agree.

Spence questions this reasoning, saying that gas prices are volatile and wind prices are competitive. He cites a report from Lazard, an investment bank, showing that the levelized cost of wind energy, a key measure of its competitiveness, is continuing to go down, dropping 6 percent last year.

Even if Texas had supported the plan, AEP still needed approval in Oklahoma, where a decision was still pending. And there was strong pushback there, including from the state’s attorney general and fossil-fuel-connected groups.

Wind Catcher faced opposition from Americans for Prosperity, which was founded by the Koch Brothers, and the Windfall Coalition, whose co-founders include energy executive Harold Hamm. They were making their cases in states where the oil and gas industry has substantial influence.

“In its current form, the Wind Catcher Energy Connection Project is a risky scheme that is simply not a good deal for Oklahomans,” John Tidwell, Americans for Prosperity’s Oklahoma director, said in a statement earlier this month.

Some of the opposition in Oklahoma was also from people who live near the proposed transmission line. This underscores a familiar point: Transmission lines almost always run into local objections, but they’re needed to get electricity from wind-rich areas to population centers.

A shifting landscape for federal taxes and regulations also undermined the project.

Despite the long odds, AEP initially projected that there would be a carbon tax affecting fossil fuels at some point in the wind farm’s life, which would make the project more cost effective compared to natural gas.

The company changed this assumption under scrutiny from other parties, so the cost analysis now assumes that there will be no carbon tax for decades.

The Trump administration’s corporate tax cut also reduced the project’s federal tax rate in a way that diminishes the effects of the production tax credit for tax-equity investors in big wind projects. The tax credit, meanwhile, is set to be phased out. This reduces the projected tax savings the project, making its electricity more expensive, which further hurt AEP’s case.

Adding to the uncertainty is the Trump administration’s challenges to the Obama-era Clean Power Plan, which would have driven up demand for alternative energy sources to replace coal power plants.

Wind Catcher’s challenges were specific enough to its circumstances that the failure is not likely to affect how developers approach other projects, said Jay Orfield, senior energy analyst for the Natural Resources Defense Council.

He noted that the industry’s capacity has been growing year to year and that there are other projects in various stages of development that would be nearly as large or larger.

In the first fast half of this year, $17.5 billion was invested in wind energy projects, up 121 percent from the same period last year, according to Bloomberg New Energy Finance. Some of the increase is because companies are rushing to begin projects in time to take advantage of the federal production tax credit, which will phase out by 2020.

AEP was developing Wind Catcher with Invenergy, a Chicago-based company. There is still a chance that Invenergy could come back with a new version of the project, or have several smaller projects, with or without AEP. Invenergy did not respond to a request for comment.

Local leaders in the Oklahoma Panhandle are pinning their lingering hopes on the idea that some version can be salvaged. The mostly rural region has struggled to attract employers, and this would have been by far the largest investment in its history, with a projected 4,000 construction jobs and a dramatic increase in tax revenue for local governments.

Its demise is still sinking in for Michael Shannon, director of the region’s economic development office. “I’m stunned,” he said, adding, “There has to be a Plan B.” 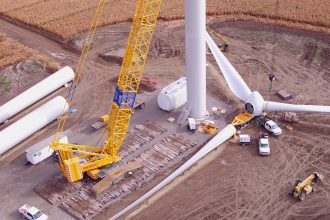 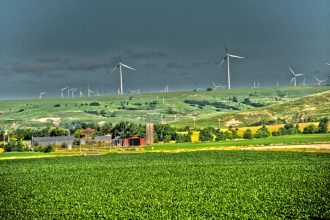