ATKINSON, Neb.—People began arriving at West Holt Junior-Senior High School before noon on Thursday, some in pickups or cars from nearby ranches and farms, others in buses chartered by the Laborers’ International Union of North America (LiUNA) or by Americans for Prosperity, a conservative group that favors free markets. By 3 p.m., they had formed a long line that snaked into the parking lot outside the gymnasium, ready to tell the U.S. State Department what they thought of the Keystone XL pipeline project, which would pump Canadian crude oil through Nebraska on its way to the Gulf Coast.

About 1,000 people showed up for the hearing, which was scheduled to run from 4:30 to 10 p.m.  About 160 registered to speak, and the meeting was extended until 11 p.m. so most of them could be accommodated.

Union members spoke about energy security and the jobs the pipeline would bring. A LiUNA member told the audience that his union employs skilled laborers who would build “the best” pipeline humanly possible. Another said that while he doesn’t like the idea of oil spills, he was “realistic” about America’s oil dependence, and he would rather buy oil from Canada than the Middle East.

Local landowners spoke about the risk of putting an oil pipeline through the Nebraska sandhills, an ecologically sensitive area about 10 miles from Atkinson. A fifth-generation rancher said an oil spill would jeopardize her land and her children’s future. The current route is “just wrong,” she said.

Another landowner said he understood the union members’ need for jobs, but added that the laborers could still build the pipeline if it was rerouted out of the sandhills. “On the other hand we Nebraskans are stuck with the consequences” if there’s an oil spill, he said.

“The water in this ground is more valuable than all the oil” in the world, said John Hansen, president of the Nebraska Farmers Union.

The State Department has been holding hearings this week in the states the pipeline would pass through, but this one was a bit different from the others. For one thing, Atkinson is the smallest town—with a population of 1,300—to host one of the hearings. It is also the town closest to the sandhills, which lie just above the Ogallala aquifer. Most of the people who live in and around Atkinson get all their drinking and irrigation water from the aquifer. Even those who are inclined to support the Keystone XL, which would be the first oil pipeline to run through the sandhills, tend to think it should be rerouted away from the aquifer.

In August, Republican Gov. Dave Heineman urged the State Department to move the proposed route out of the sandhills. Meanwhile, state senator Ken Haar is leading an attempt to call a special session of the state legislature to discuss alternate routes. Both he and state senator Annette Dubas spoke in favor of changing the route at Thursday’s hearing.

The State Department had planned to run the Atkinson hearing like the other hearings it has held, with people given three to five minutes to speak on a first-come, first-served basis. Usually that means that only the first 100 or so through the door get a chance to speak.

Earlier in the week, Atkinson Police Chief Tim Larby and other local leaders had worried that this format would give outsiders an unfair advantage, because local landowners couldn’t leave their farm work early enough to line up for the coveted speaking spots.

But shortly before the meeting began, leaders from the pipeline’s supporters and opponents got together with Larby and settled on a plan of their own, which allowed alternating speakers from both sides take the floor.

The last-minute change in plan surprised just about everyone, including State Department personnel.

Hansen, the Farmers Union president and a leader among the pipeline opponents, said that alternating speakers was a good way to avoid “unnecessary conflict.”

Larby said a strict first-come, first-served format could have led to security problems if people had rushed for the door. “We didn’t want it to be like Black Friday at Walmart,” he said.

After the first 50 went through the door, the alternating format was abandoned, and the remaining people were chosen on a first-come, first-served basis. Most of the union members had left by 9 p.m., and those who stayed were generally local residents who spoke against the pipeline.

Jane Kleeb, executive director of the anti-pipeline group Bold Nebraska, said 80 percent of the people in the audience were pipeline opponents, so it was only right that more of them should get a chance to speak.

As a sign of solidarity, pipeline opponents wore red University of Nebraska T-shirts or red T-shirts that said “Stop the Pipeline.” Members of LiUNA showed up in orange T-shirts saying “Keystone XL means jobs.” Those from other unions wore blue, green and yellow T-shirts with similar slogans.

Supporters and Opponents Make Their Cases

Connie Weichman was among the landowners who filed into the gymnasium to oppose the pipeline. In an interview, she said that her family has been in the area since the 1930’s, and that the pipeline would cross through the middle of her cattle ranch. Weichman said the sandhills are particularly sensitive to potential oil spills, because the sandy soil is extremely permeable and the water table lies close to the land surface. In the spring, she said, her meadows are so flooded with water from the aquifer that it’s impossible to drive through the fields.

Like many landowners, Weichman worries that contamination from the pipeline would ruin the water source that sustains her family, her cattle and her neighbors. The Ogallala aquifer supplies 78 percent of the water used by Nebraska’s residents and industry and 83 percent of the state’s irrigation water.

The fact that another pipeline built by TransCanada, the Alberta-based company that wants to build the Keystone XL, has leaked more than a dozen times since it opened in June 2010 hasn’t helped the company’s image in Atkinson. That pipeline, known simply as Keystone, runs through the eastern part of Nebraska, away from the sandhills.

A member of LiUNA, who didn’t want his name used for fear that it could hurt his job prospects, said he believes landowners have “a right to be worried about anything that goes through their land.” However, he said he trusts the proposed safety precautions for the Keystone XL and supports the pipeline for the thousands of jobs it would bring.

Carl Baysinger, a LiUNA member from Columbia, Mo., arrived in Atkinson on one of the union buses. He said he came to support his “brothers and sisters” in the union’s Nebraska chapter.  Baysinger said that because he’s from out of state, he did not sign up for a speaking spot.

Baysinger has worked on pipeline construction projects in the past and now works as an organizer for LiUNA. He said he doesn’t care if the pipeline is rerouted, as long as it puts people to work. “It’s not like [LiUNA members] are against breathing fresh air and drinking clean water,” he said.

It’s not clear how many people in the crowd came from outside of Nebraska. On Tuesday, a spokesman from the American Petroleum Institute told InsideClimate that a coalition of business and labor groups, including API, planned to bus 150 representatives to the meeting. According to LiUNA spokesman David Miller, the union drove two buses to the hearing but was not affiliated with the API coalition. 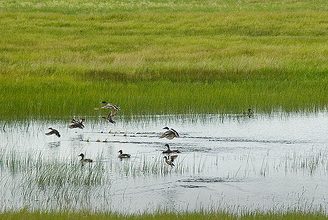 State Dept. to Hear Earful on Pipeline in Nebraska