The chairman of the House Science Committee has announced a hearing next month into the refusal by two state attorneys general to comply with subpoenas seeking information on their investigations into ExxonMobil.

Rep. Lamar Smith, Republican from Texas, said on Tuesday the inquiry will focus on whether Congress has authority to issue subpoenas to the New York and Massachusetts attorneys general investigating the oil giant for misleading investors on climate change. It will also discuss what recourse the committee has if the the two AGs choose not to comply.

Among the Republican majority witnesses to testify at the Sept. 14 hearing will be two law professors with connections to think tanks funded by the fossil fuel industry and who have been critical of the attorneys general. The third is a liberal law scholar and professor who has frequently testified before Congress. The Democrats on the committee have yet to name a minority witness.

The hearing signals further escalation in the hostilities between Smith and the two attorneys generals, Eric Schneiderman of New York and Maura Healey of Massachusetts. Smith has called the investigations politically motivated, while the Texas congressman has been criticized for trying to shield Exxon from scrutiny about its knowledge of climate science decades ago and subsequent embrace of climate denial.

Eric Soufer, a spokesman for Schneiderman, said the hearing is nothing more Smith’s attempt to derail the investigations.

“[It is] very telling that Chairman Smith believes he needs to trot out handpicked professors to validate his radical views on why congress should be allowed to trample on states rights and interfere with a state law enforcement investigation,” Soufer said. “We hope the Chairman will hear from more than his handpicked experts and not try to silence dissenting views.”

Chloe Gotsis, a spokeswoman for Healey, also decried the hearing.

“This is yet another attempt by Congressman Lamar Smith and his colleagues to interfere with our lawful and ongoing investigation into whether Exxon Mobil misled Massachusetts consumers and investors about the impacts of climate change,” she said. “Congressman Smith’s committee has no jurisdiction over the regular work of state attorneys general and we will continue to fight every attempt to impede our investigation.”

The two attorneys general and a number of nongovernmental climate advocacy groups have defiantly refused to comply with subpoenas issued by Smith last month. The subpoenas demand documents since 2012 pertaining the ongoing investigations including communications between the state offices and the activists.

In rebuffing the subpoenas, the two attorneys general have called the demand an overreach by the committee and an affront to states’ rights. Smith has countered that the subpoenas are a “legitimate and constitutionally authorized legislative investigation.”

“We are currently exploring options for our witness slot,” said Kristin Kopshever,  communications director for the committee Democrats.

Environmental organizations say the witnesses appear sympathetic to Smith and the industry.

In a recent op-ed piece in The Wall Street Journal, Foley called the two attorneys general “utterly wrong” for refusing to comply with the subpoenas. Foley is affiliated with the Cato Institute, a think tank that Charles and David Koch, the billionaire owners of Koch Industries, helped found.

Rotunda is associated with the Heartland Institute and is a frequent contributor to the organization’s policy blog, which often features writings challenging the scientific consensus on manmade climate change.

In a recent blog post, Rotunda slammed the investigations by the attorneys general.

“That will teach those who question global warming that the government is not fooling around. Investigations will cost the companies and the scientists a lot of money to answer subpoenas and interrogatories. That is the point of chilling scientific inquiry, Rotunda wrote in his Heartland Institute essay.

Turley, who runs a blog and has written about the reality of worsening climate change, does not appear to have staked out a public position on the attorneys general investigations.

The witness list points to an unbalanced hearing, said Michael Halpern, a program manager for the Union of Concerned Scientists, an advocacy group that represents U.S. scientists and is among the nongovernmental groups subpoenaed by Smith.

“What I expect from this remarkable intellectual contortion is trying to justify these invasive and unwarranted subpoenas,” Halpern said.

He said he finds it curious that his organization was not invited to testify because they have made repeated offers to meet with bipartisan representatives of the committee.

“We have said all along that we would be happy to sit down and have a conversation with a bipartisan committee to explain why we think the AGs should pay attention to Exxon’s behavior,” he said. 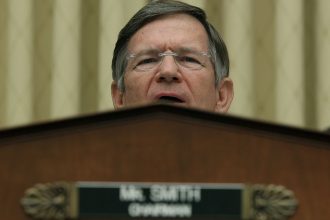 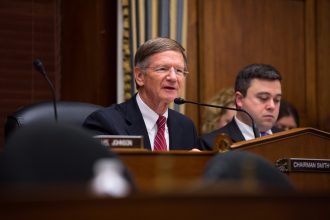