With New York City’s buildings responsible for three-quarters of its carbon emissions, updating the city’s building codes is the simplest and most effective way to slash emissions and reach Mayor Bill de Blasio’s ambitious carbon reduction targets, according to a report released Tuesday.

That conclusion was announced  by Edward Mazria, an architect and founder of Architecture 2030, a think tank researching ways to reduce emissions from the building sector. He presented the group’s report, which urged the city to update its building codes to match the national standards for residential and commercial buildings in 2016. That alone will help reduce the city’s building sector emissions by 50 percent, Mazria said. Future code upgrades with energy consumption targets could bring another 20 percent reduction by 2019 and 40 percent by 2022.

This, along with incentives to voluntarily decrease emissions even further, tax credits, lower permit fees, mandates to retrofit existing buildings and renewable energy use can get the city to meet its carbon reduction goals, he said.

“If we get this right, we solve the energy and climate crisis,” Mazria said. “If we don’t, it’s a catastrophe.”

The report targeted both the city’s one million existing buildings as well as the approximately 2,300 new ones that are built every year. The report said renovating and retrofitting the buildings and incorporating solar and possibly wind energy will create about $5.8 billion worth of construction activity and more than 82,000 jobs annually.

Mazria stressed that cities were crucial to addressing climate change. New York City has been a leader on the issue and if the city succeeds at implementing this plan, the rest of the world will follow, he said.

In September 2014, Mayor de Blasio announced the 80×50 goal, saying his administration would cut emissions 35 percent by 2025 and 80 percent by 2050 below 2005 levels. By law, the city is required to release a long-term sustainability plan every five years. In April, the DeBlasio released OneNYC, his administration’s update to former mayor Michael Bloomberg’s PlaNYC, which helped reduce the city’s emissions by 19 percent.

DeBlasio’s initiative is far-reaching. The plan expanded on Bloomberg’s sustainability initiatives and weaved in efforts to reduce poverty, improve public housing and subway service and better access to healthcare. Although the plan set lofty goals, environmental groups criticized it for not providing details on how the city would reach those goals.

Mazria’s plan fills in some of the gaps.

Ilana Judah, a principal and director of sustainability at FXFOWLE, an architecture firm based in New York City and Washington, D.C., said it was crucial to ensure that the updated codes were performance-based and held building operators and tenants accountable for emissions. She advocated for a system in which the city evaluated building emissions yearly and enforced energy consumption cuts.

The second important aspect is to mandate upgrades at the time of building purchases, Mazria said. On average, more than 26,000 buildings are purchased every year in the city. Since a buyer is already typically spending millions of dollars to purchase a building and might plan on renovating it, it is an opportune time for the city to require energy efficiency upgrades, Mazria said.

The plan assumes that the city’s real estate market will remain stable and continue to attract wealthy investors.

“We should not assume that will be the case indefinitely,” said Moses Gates, the director of planning and community development at the Association for Neighborhood and Housing Development, a group that advocates for affordable housing in the city. Gates said that the city shouldn’t rely entirely on requiring upgrades at the time of purchase to cut emissions from existing buildings and that it should consider other financing mechanisms.

Jumaane Williams (D-Brooklyn), a city council member who provided the closing remarks at the event, said the city had already passed bills updating energy codes to match the state’s standard. He said there are other bills awaiting consideration in the city legislature that will help reduce emissions from buildings.

Staff from the mayor’s office were also present at the symposium. After the presentation, Mazria met with Rick Chandler, commissioner of the city’s buildings department, to discuss the plan. 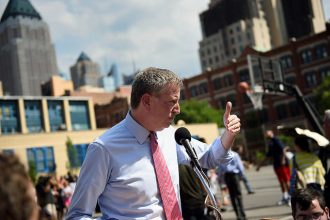