The historic rains that flooded millions of acres of Midwestern cropland this spring landed a blow to an already struggling farm economy.

They also delivered bad news for the climate.

Scientists project that all that water has flushed vast amounts of fertilizer and manure into waterways, triggering a potentially unprecedented season of algae blooms. The National Oceanic and Atmospheric Administration has predicted that the “dead zone” in the Gulf of Mexico—a massive overgrowth of algae—could become the size of Massachusetts this summer, coming close to a record set in 2017, and that an algae bloom in Lake Erie could also reach a record size.

“Every place in the Midwest is wet,” said John Downing, an aquatic ecologist and director of the Minnesota Sea Grant. “There will be a terrific amount of algae blooms.”

As rain washes nutrients—mostly fertilizers and manure—into streams, rivers and lakes, those nutrients stoke the growth of algae, a process known as eutrophication that depletes oxygen in the water. That algae can choke the waterways, killing aquatic life and making water unsafe to swim in or drink.

These algae-filled waterways also emit methane, a powerful climate pollutant. Atmospheric methane has shot up over the past 12 years, threatening global emissions-reduction goals. Downing and his colleagues have determined that algae blooms could accelerate methane emissions even more.

“We not only lose good water,” he said, “we also exacerbate climate change.”

In a paper published earlier this year, Downing and his colleagues projected that, as the global population grows and more nutrients enter waterways over the next century,  eutrophication could increase methane emissions from inland waters by 30 to 90 percent.

“We’ve projected out, based on population growth and food production, how much we can expect eutrophication to impact the climate,” Downing said. “The rates are huge.”

Predictions for increasingly heavy rains in the Midwest in coming decades, along with increased heat, could further drive algae blooms.

“Large rains are causing a lot more run-off, and with climate change, we’re having hotter temperatures,” said Anne Schechinger, an analyst for the Environmental Working Group. “You have these big rain events, and then heat mixes with these nutrients and makes them explode in all these water bodies.”

The group launched a map last year that tracks media reports of algae blooms. So far this year, Schechinger noted, it has tracked at least 30 algae blooms through the beginning of June, including some that never went away over the winter when they usually subside with cooler temperatures.

The extent of this year’s algae blooms depends on the weather. If it’s cooler than expected, the blooms might not proliferate as much. The delayed planting could also mean that farmers use less fertilizer this year.

“It depends on how much the rain continues,” said Bruno Basso, a professor of ecosystems science at Michigan State University. “Not having things in the ground, that’s positive, because farmers won’t put fertilizer on the ground.”

Fertilizer, however, is not the only problem. Environmental groups blame the rise of algae blooms in certain regions, particularly around Lake Erie, on the proliferation of concentrated animal feeding operations (CAFOs).

“We found this huge explosion of animal operations since the mid-1990s,” Schechinger said. “We think manure is the most important element of what’s contributing to algae in a lot of these places.” 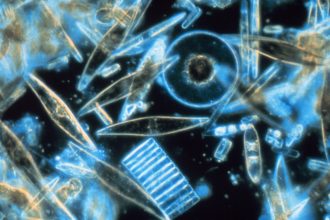 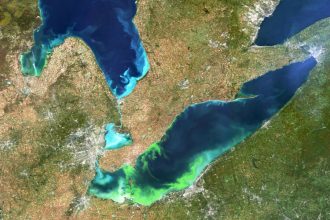