A pipeline that ruptured and leaked at least 80,000 gallons of oil into central Arkansas on Friday was transporting a heavy form of crude from the Canadian tar sands region, ExxonMobil told InsideClimate News.

Local police said the line gushed oil for 45 minutes before being stopped, according to media reports.

Crude oil ran through a subdivision of Mayflower, Ark., about 20 miles north of Little Rock. Twenty-two homes were evacuated, but no one was hospitalized, Exxon spokesman Charlie Engelmann said on Saturday.

In an interview with InsideClimate News, Faulkner County Judge Allen Dodson said emergency crews prevented the oil from entering waterways. The judge issued an emergency declaration following the spill and is involved in coordinating clean-up efforts among federal, state and local agencies and Exxon.

Wabasca Heavy is a type of diluted bitumen, or dilbit, from Alberta’s tar sands region, according to the Canadian Crude Quality Monitoring Program, an industry source that provides data on different types of Canadian oil.

Because dilbit contains bitumen—a type of crude oil that’s heavier than most conventional crude oil—it can be harder to clean up when it spills into water. A 2010 spill in Michigan, which released a million gallons of dilbit in the Kalamazoo River and has cost pipeline operator Enbridge more than $820 million, continues to challenge scientists and regulators as they work on removing submerged oil from the riverbed.

Dodson said emergency crews led a “monumentally successful” effort to prevent the Exxon spill from entering nearby Lake Conway, a popular recreational area. First responders set up earthen dams to contain the flow of oil, he said, and crews are working to shore up the protections as rains continue to fall and complicate the cleanup operations.

The size of the spill remains unclear. Dodson said the Environmental Protection Agency has estimated the spill at 84,000 gallons. The EPA and the Arkansas Department of Emergency Management did not return calls for comment.

According to a Saturday afternoon press release from Exxon, 189,000 gallons of oil and water have been recovered from the site so far, and it is prepared to clean up more than twice that amount.

“They’re absolutely going above and beyond” what’s required, Dodson said. He praised Exxon, local, state and federal agencies for their “amazingly fast response.” More than ten agencies responded to the spill within the hour, he said, and “everything fit together perfectly. It was such an efficient response.”

According to Exxon, crews have deployed 2,000 feet of boom and 15 vacuum trucks. Dodson said the EPA and Exxon’s contractor CTEH are monitoring air quality.

The spill comes at an inopportune time for the industry, as it lobbies hard for approval of the controversial Keystone XL oil sands pipeline that would carry Canadian dilbit from the tar sand region to Texas refineries on the Gulf Coast. The Obama administration must approve or reject the project because it crosses an international border. Last week, a train hauling Canadian oil derailed and leaked 30,000 gallons of crude in western Minnesota. 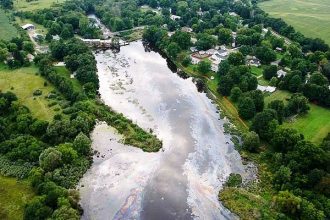 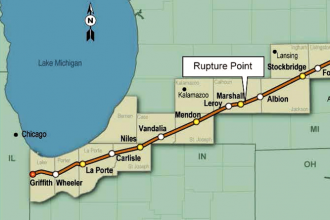